Who Let the Dogs Out? 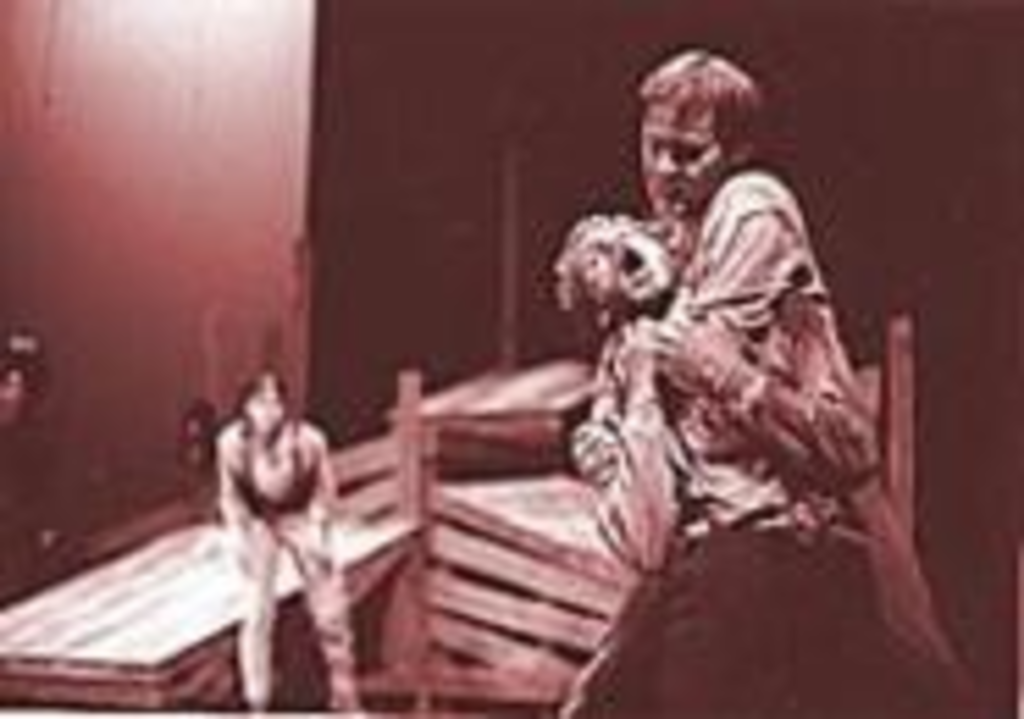 Spinning Jack London’s adventuresome books Call of the Wild and White Fang into musical theater is not a task for the faint of heart. Set on the frozen Alaskan coast of 1901 and populated mainly by dogs and wolves, the texts offer barriers aplenty — chiefly, how to anthropomorphize all those four-legged creatures without looking like an episode of Scooby-Doo. But in the University Theatre troupe in Lawrence, lyricist and author Jon Lipsky, composer Bill Grady, and director Marianne Kubik are to be commended for creating — in act one, anyway — a hypnotic and moving piece of theater.

Nathan Scholl scrupulously plays the first half’s protagonist, Buck, a mix of St. Bernard and German shepherd whose life is about to take perilous twists and turns. He is thrown into the role of indentured servant — the number-two slot in a sadistically treated pack of sled dogs — and spends the better half of the show clawing his way out. The show is set during the Alaskan Gold Rush of 1898 to 1901, and a number of greedy humans do all they can do to break Buck’s spirit, including forcing him into bloody dog fights and cannibalism. This is not your preschooler’s Call of the Wild. The ambitious cast, especially Kelly Mengelkoch, is in very fine voice, branding such songs as “Slave Ship” and the first act finale, “Beggars Will Ride,” with sincerity and heart. Delores Ringer’s set of wooden structures on wheels is amazingly flexible; shoved together in different combinations, the set pieces become everything from the cavity of a slave ship to icy peaks. Patrick Carrier’s costumes are equally effective. He has dressed the dogs in taupe tops and bottoms intersected at various angles by red suspenders and utility belts with hooks where the reins will attach. They completely evoke the nightmarish bondage the dogs endure.

But as the second act commences, there’s a terrible sense that everything should have stopped at intermission. Call of the Wild basically ends (with a high body count), and White Fang begins. It’s deceptive at best and borders on sloppiness to just take up another story and staple it to the first one. After Scholl’s commanding performance as Buck, one doesn’t open another book and put him in the chorus as a human bystander (in the same clothes, no less). Michelle Nikoomanesh, who is memorable as a dog in the first act, is now front and center as a wolf for the second, and her new prominence goes to her head with uncontained hamminess. Better to simply take in act one, which is really a self-contained, 80-minute musical on its own and a respectable one at that. Where the first half takes an honest approach to man versus beast, the second is merely a beastly cartoon.