Who can tell you to wear a mask in Kansas as COVID-19 surges? It’s complicated 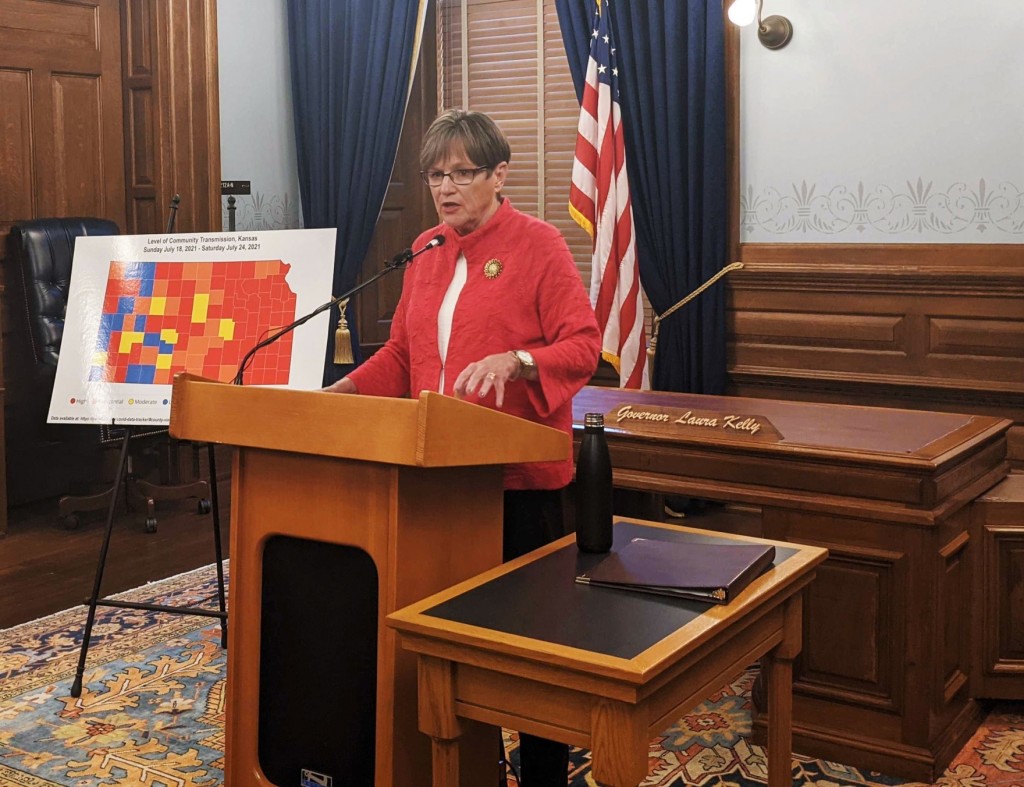 There’s confusion over whether Gov. Laura Kelly has the authority to issue new pandemic restrictions after a Johnson County judge ruled a law that took away some of her powers was unenforceable. Kelly did not issue a mask mandate on Wednesday. // Courtesy Abigail Censky/Kansas News Service

As the delta variant pummels Kansas, there’s confusion about who has the authority to issue pandemic restrictions that could curb the spread of COVID.

The delta variant of the COVID-19 virus has 84 of the 105 counties in Kansas caught in a regional hot zone.

Meanwhile, more than half of all eligible Kansans are not vaccinated.

That leaves Gov. Laura Kelly faced with whether to use emergency powers to fight the resurging public health crisis even as that authority remains in legal limbo.

A Johnson County judge’s order found a new law limiting her emergency powers flawed. While that case awaits the outcome of appeals, Kelly has yet to take forceful action in response to the resurging pandemic — like mask mandates that could slow the state’s economic recovery and that would surely draw strong resistance.

The Kansas Department of Health and Environment reported more than 2,000 new COVID cases since Monday, 99% the result of the new ultra-contagious delta variant.

But on Wednesday Kelly stopped short of issuing another statewide mask mandate. Instead, she chose to coax.

Even vaccinated Kansans, she said, ought to wear masks indoors in 84 of Kansas’ 105 counties. Her guidance mirrored earlier advice from the U.S. Centers for Disease Control and Prevention. She did require most state workers to wear masks on the job.

“I’m as frustrated as any other vaccinated Kansan,” Kelly said. “I feel like I did my part. And one of the rewards of that was not having to wear a mask.”

“But that option has now been taken away,” she said, “because of the delta variant and how much more contagious it is, and how few Kansans unfortunately, have gotten vaccinated.”

State employees unable to social distance at work and visitors at state and federal buildings will be required to wear masks beginning Monday. But for all other Kansans, the recommendation is toothless.

That’s largely because over the course of the pandemic, the conservative supermajority in the state Legislature passed laws shifting the state’s pandemic response to local county commissions, hamstringing the ability of Kelly and local health officials to respond.

In late March, the governor compromised with state lawmakers, agreeing to give up some of her power. When she issued another statewide mask mandate, a panel of state lawmakers voted it down 5-2. The number of counties with mask mandates dropped from 57 in February to seven by early April.

That was, in part, because the new law required speedy judicial review for anyone with a grievance of a mask policy or restriction issued by a school board or local government. In the case of a disagreement between a parent and a school board, a court had to hold a hearing on the issue in three days, and issue an order within seven.

Kelly’s power atrophied so greatly under the law that Republican leaders were able to supersede her requests to extend the state of emergency in early June.

However, some power could be restored if a Johnson County Judge’s ruling that deemed the law unenforceable stands.

Johnson County District Judge David Hauber ruled the Legislature was stepping on the toes of the judicial branch and depriving local governments of due process.

“It is the ultimate legislative stick intended to goad and/or supplant judicial rules and functions,” he wrote. “It promotes the equivalent of legal anarchy.”

Schmidt contends the ruling prompted “unnecessary and disruptive confusion,” potentially making it difficult for the state to respond to a future disaster emergency. He said it “invited the very sort of ‘legal anarchy’ that troubled the court.”

That court fight has left confusion about the power of the governor or local public health officials to impose rules aimed at combatting the pandemic.

In her Wednesday press conference, Kelly deflected questions about whether she thought local health officials had the authority to respond to the pandemic.

“I’m gonna leave that to the local units of government and the school boards to decide how they want to interpret what the judge’s ruling does,” Kelly said.

A later statement said, “Our office does not want to speculate until a decision is reached by the Kansas Supreme Court, which we anticipate will happen soon.”

“We already know that the attorney general has submitted the appeal,” he said, “so I’m assuming we will get a statewide decision in a few months.

“Until the appellate courts rule,” Hall said, “we don’t have any sort of statewide established standard because another court in the state could rule differently than the judge in Johnson County did.”

Local health officers can do things like issue a mask mandate and limit the size of gatherings with or without the law. But the law struck down by the Johnson County judge would require those health officials to first get permission from their county commissions.

“In terms of the ability to issue orders we have more flexibility now than we did two months ago,” Kriesel said. “That being said, I don’t think we’re going to see nearly the amount of aggressive ordering that we saw in the fall of last year because of the backlash.”

Regardless of who has the authority to respond, Kriesel said, public health officials are looking for political cover.

“You could probably, on one hand,” he said, “count the number of local health officers that would be willing to issue an order without knowing what their commissioners’ stance was.”

Abigail Censky is the political reporter for the Kansas News Service. You can follow her on Twitter @AbigailCensky or email her at abigailcensky (at) kcur (dot) org.

This piece is reprinted with permission via Kansas News Service and ksnewsservice.org.