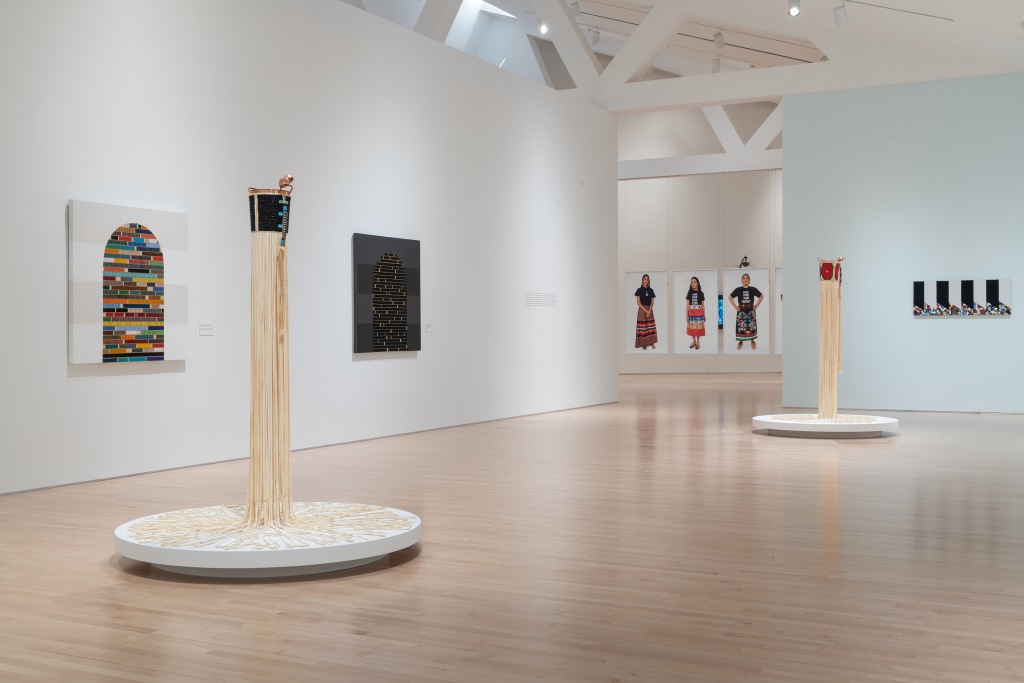 “Everything here is formed in relation to every other living and nonliving thing from the earth. All our relations.”

—There There by Tommy Orange

Dyani White Hawk’s work is a declaration of those relationships. The objects created by hands, the words spoken by mouths, the patterns passed down by generations, the new materials alongside the old. The strength in relationship between those who have survived genocide. The relationship to the generations yet to come. She illuminates this web of relatives.

White Hawk (Sičáŋǧu Lakota) is a contemporary artist and curator based in Minneapolis. Her solo exhibition Speaking to Relatives is currently on view at the Kemper Museum of Contemporary Art through May 16. She transcribes historical imagery into modern forms and contexts, using painting, sculpture, photography, and video installation. White Hawk uses both abstract forms and representational imagery in calling up collective history and present.

The abstract expressionists that dominated the mid-twentieth century art world purported to express some pure universal truth, they were often inspired by—that is, they appropriated from—Indigenous artists whose work was simultaneously derided as decorative. While the paintings of Pollock, de Kooning, and the like were treated as apolitical and ahistorical, nothing ever truly is. While the Ab-Ex crew thought they were rising above autobiography, their work still tells the story of theft and supremacy. 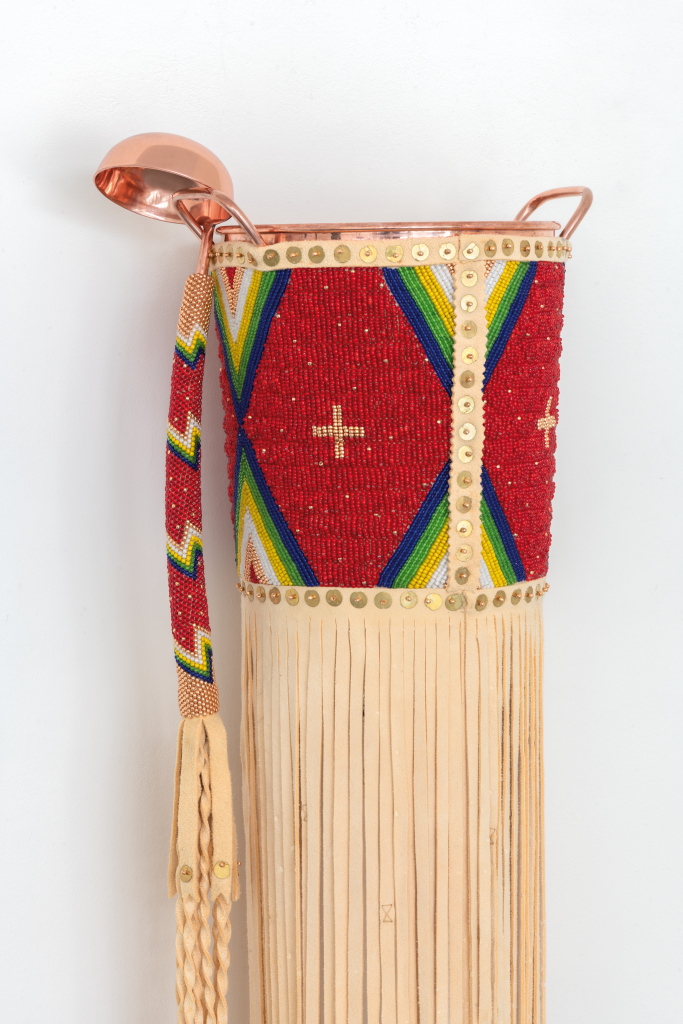 White Hawk’s Stealing Horses Back cuts sharp contrasting columns of black and white beads that give way to boldly colored geometric patterns at the bottom of the canvas. The title of the piece feels like a “fuck you” that also points to the reclamation of form, of art, of place.

White Hawk picks up abstract meditations on form without dropping the historical context within which she is creating work. Her colors, shapes, textures, and patterns are drawing on materials and the visual vocabulary of Native histories. She embraces the forms created by Indigenous women that were once (and at times, still are) dismissed as lesser.

Čaŋté Skúya (Sweetheart) is a painting of two pairs of moccasins, nearly abstracted by the large scale and focus on detail. Set against a bright blue background, she brings full attention to the intricate patterns and colors stitched into these shoes. With the “sweetheart” of the title, and the two pairs nestled together like a couple, she emphasizes connection and relationship.

Her work puts the patterns, styles, and materials of Indigenous art/craft at the fore. She centers and celebrates the creative work that was not just the work of her ancestors, but which remains alive and evolving in the present.

Commanding the center of the gallery is a photographic work suspended from the ceiling, I Am Your Relative. Six Indigenous women stand wearing black t-shirts and brightly colored and patterned skirts. Across their shirts reads a collective message: “I am / more than your desire / more than your fantasy / more than a mascot / ancestral love prayer sacrifice / your relative.”

On the reverse of these life-size photos, the back of the women’s shirts list which nation(s) from which they hail, including Diné, Anishinaabe, Quechan, and more. 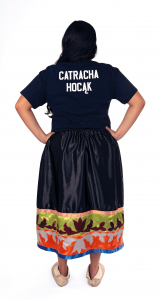 The presence of these women is a force in the room. This is an artwork whose meaning and impact requires seeing it in person. Just reading the sentence on their shirts is not the point. They are here, taking up space, speaking collectively, and calling the viewer in as family. “I am your relative,” they say. Standing in the gallery, with your sisters speaking before you, you are compelled to listen.

Surrounding I Am Your Relative are eight screens playing videos of Indigenous women speaking their mother tongues. The space is filled softly with their voices overlapping.

This video installation, LISTEN, immerses viewers in the sounds of the languages native to the land we are living on. The wall text asks, how many languages you can identify by sound? While most of us can identify languages like Russian, French, Chinese—we cannot differentiate between Yupik and Cherokee, Seneca and Kiowa. Through genocide and cultural erasure, current inhabitants of this continent are generally disconnected from languages indigenous to it.

“LISTEN aims to chip away at one of the biggest challenges facing Native people, the tremendous lack of knowledge among the American public regarding Native people, history, and our contemporary tribal nations,” the wall text reads. “Because the full national history of this land is not taught in our public education systems, most Americans are largely oblivious to the history and contemporary realities of Native people.” 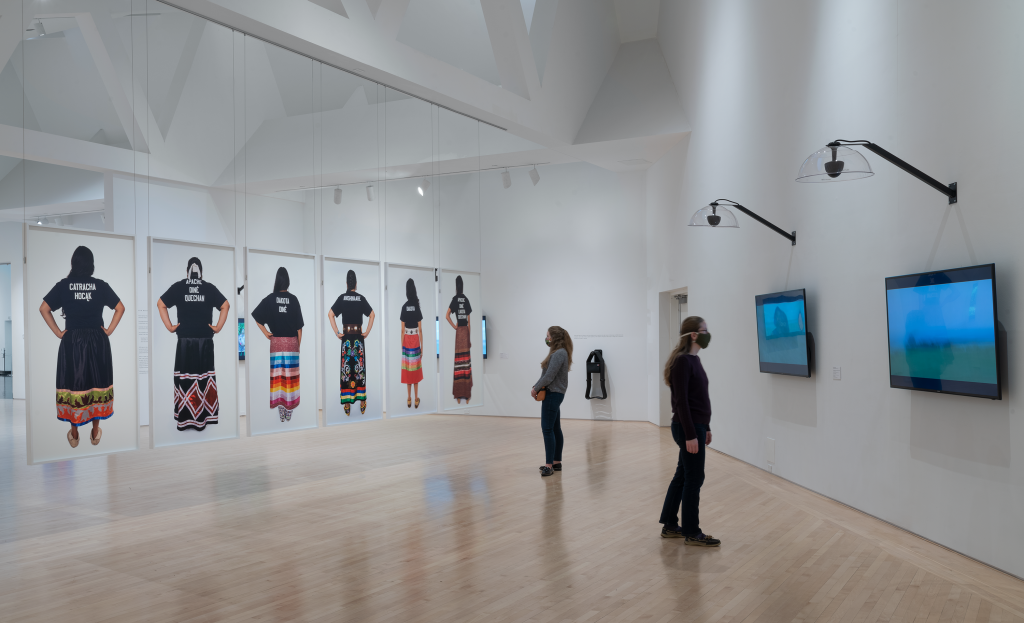 LISTEN names the viewer’s obliviousness and challenges us to do something about it. Will we allow ourselves to remain ignorant? While the installation itself invites the viewer to expand our awareness, there is an implicit call for the viewer to do the work of self-education beyond the confines of the gallery, as well.

In each video, a woman speaks in her language, standing on land to which she is indigenous, interspersed with beautiful shots of that land—trees, grasses, butterflies. They are sharing stories and experiences, but there are no subtitles. The viewer is immersed in the language itself, its sounds. It’s a powerful, counterintuitive artistic choice. If we were reading the subtitles, we wouldn’t really be listening to their voices. Without subtitles, without understanding specific meanings, viewers must tune into details. Hearing the cadence of their voice, the sounds of their particular combinations of consonants and vowels, the visual power of knowing they sit on their ancestral land. 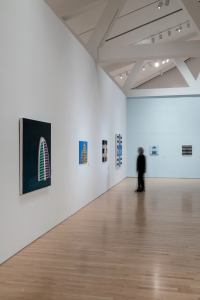 There were once 300 languages spoken on the land that is now the United States. One hundred and seventy-five are still spoken—though many of those are at serious risk of being lost. This installation is a gift. It felt like a privilege to hear languages, like Cocopah and Hočąk, that I had not heard before.

White Hawk also points to the silencing of Native art practices in her Carry series, a collection of sculptures of tobacco bags and ladled vessels in the style of those that would be used in ceremonies, except here they are oversized and non-functional. She nods to the treatment of Native arts as strictly utilitarian: What happens when utility is taken away, when she makes them unusable? She interrogates how Indigenous arts have appeared in cultural institutions—typically as “functional arts,” separate from “fine arts.” Why can these sculptures be treated as “fine art,” while a traditional beaded tobacco bag is not treated as such? Is fine art defined by its lack of utility? 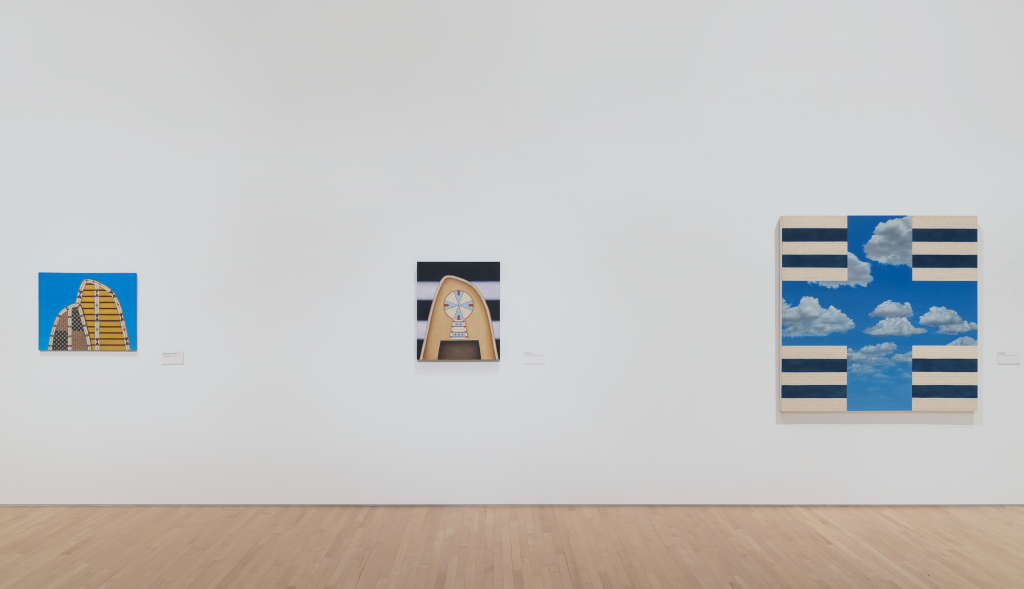 You’ve probably seen beaded tobacco bags in a museum before. But probably in a stuffy cultural wing displaying Native American works from the 19th century. Segregated and relegated to an artifact of days gone by. White Hawk’s work emphasizes a living culture, worthy of the largest gallery in the museum.

Choosing to make these sculptural vessels oversized, they command space, they stand high, you have to look up at them, move your body around them. They are literally elevated, appearing to hover in the air on their own strips of sinew. The bright bead patterns and shiny metals feel joyous and celebratory. When you’re under the thumb of oppression, the creation of beautiful objects is an essential resistance through pleasure.

That pleasure and celebration of connection, of relation, of communal culture is the glowing thread running through this show encompassing ten years of White Hawk’s work.

This show is about presence. About not just the survival of genocide, but creation that comes in the wake of that survival. It is a declaration of space, of place in culture, history, and collective consciousness. It is a rejection of erasure. A dialogue through time.