White Arrows frontman Mickey Church talks about his magic powers; opens for the Neighbourhood next week at KC Live Block 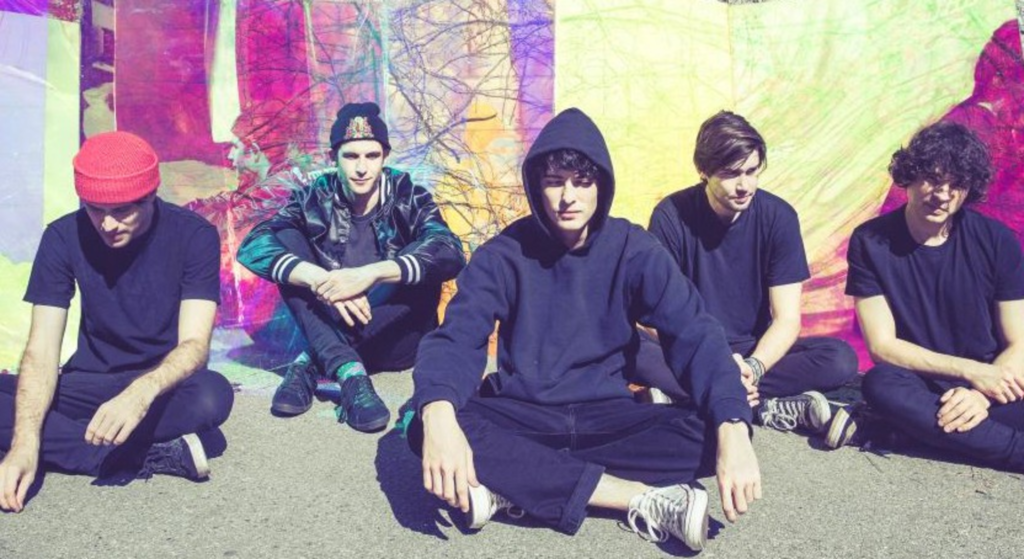 If White Arrows was an Instagram account, it would post inverted gifs of L.A. palm trees swaying in the wind with post-modern psychoanalytical quotations as captions. Its bio would have “exploring neon as a medium” as its current vocation and a recently added posthumous send-off to Alexander Shulgin accompanied by an alien emoji.

Comprised of five Californian millennials – each with a surrealist’s taste in art and literature – White Arrows epitomizes indie eletronica with spacey vocals and psychedelic hooks. The group’s 2012 album, Dry Land is Not a Myth, could be heard playing last summer in any given Urban Outfitters. But Mikey Church, Steven Vernet, Andrew Naeve and Paul Caballero lately have been hard at work in L.A. bringing their iPhone-toting, festival-hopping fans something more substantial to concentrate on with their forthcoming  sophomore album In Bardo. They have teamed up with producer Jimmy Messer to lend studio polish and guidance to their sound and on June 25, White Arrows will release a refined album that’s too moody to shoplift high-waisted shorts to.

Ahead of White Arrows’ two-month North American tour opening for the Neighborhood, we phoned lead singer and guitarist Mickey Church in L.A.

The Pitch: In Bardo sounds like a stylistic departure from what you guys previously put out and toured on with Dry Land is Not A Myth. What was the main inspiration and how does it differ from the previous album?

Mickey Church: It’s obviously darker and heavier than the first album. “In bardo” literally means the transition. It comes from the Tibetan Book of the Dead where there are like six bardos – they’re kind of like realms before you can achieve afterlife. and that’s kind of like the embodiment of where we are and who we are right now.

Is Tibetan philosophy the sole inspiration or does the album draw on more of the band’s collective experience?

i think that’s just what’s been happening in life – as opposed to the first record. We were fortunate, in a sense, where we got offered a bunch of tours before we even had any real releases, but it made it hard to write a record over one point in time. Whereas we got done touring and got to record this record in one place in time. That was just the headspace I was in when I was writing the lyrics and writing all these songs. It’s kind of like a time capsule. It’s like a [singular] point in time.

You’re gearing up to go on a tour opening for the Neighborhood, how did that happen?

We actually did a few gigs with them on the West coast before we started recording this new album. It was right around Coachella last year. And then we both were just hanging at Coachella this year, running around backstage, and we were just going to see a bunch of bands together – and then they invited us out on this tour.

So it’s more like you’re touring with your friends than being in a touring band?

When you go on tour its almost like summer camp. You’re thrown in with the same people for a couple months and then you kinda go your separate ways but you remember all the experiences you had together, and [after, you know] you’re doing the same thing in different places. When you’re on tour you get to have reunions with everyone you’ve played with before and meet people you want to play with [later].

You’ve married an involved visual show with your live performances pretty successfully in the past. Is that something to expect on this tour as well?

Yeah, definitely. It’s a little more next-level. We’ve started working with Sus Boy who customized visuals for our live set and we’re the first band he’s done it for. He’s done it for electronic music artists on a big scale [in the past]. He usually does visuals for Bauuer, Skrillex, Just Blaze, Dog Blood… It’s different how he did it for us because we’re obviously a different sound than them. I’m really excited to start playing with these visuals. They’re really beautiful and really crazy.

You’ve stated previously in other interviews that you’re inspired by visuals artist. Which ones?

A lot of photography. Obviously surrealism. Salvador Dali and his persona. Like at the Rothschild parties hanging out, wearing weird face makeup. Then I like a lot of Impressionist painters. And there are a lot of photographers that I like. I like this guy named Gregory Crewdson who sets up his photographs like sets. Our band photo on this recent album where there are colored lights shining on us was actually shot by this really awesome photographer named Tierney Gearon. [She’s] a famous photographer so that was really cool to get to work with someone who I’m completely a fan of.

The adjectives “psychedelic” and “psychotropical” seem permanently assigned to you. Is this purposeful?

I think it just kind of happens naturally. I don’t think we intend to be surreal, that’s just the kind of stuff we’re into.

Do you guys trip?

We’ve been known to have vision quests.

Is that part of your process?

The process of life. We don’t necessarily use it as a tool to write music. Huxley [did write] about opening the doors of perception…

If you could pick any house or any part of the GOT universe to be from, where would it be?

I would want to be from the East where all the magic is. Like that red witch [Melisandre] and that guy [Faceless Man] with the grey streak in his hair [who] helps Arya kill people on her list.

I could see that. Especially with your degree in ritualistic shamanism.

White Arrows opens for the Neighborhood at the KC Live Block on Friday, June 27. 21+. 8 p.m. doors. This is a free event.