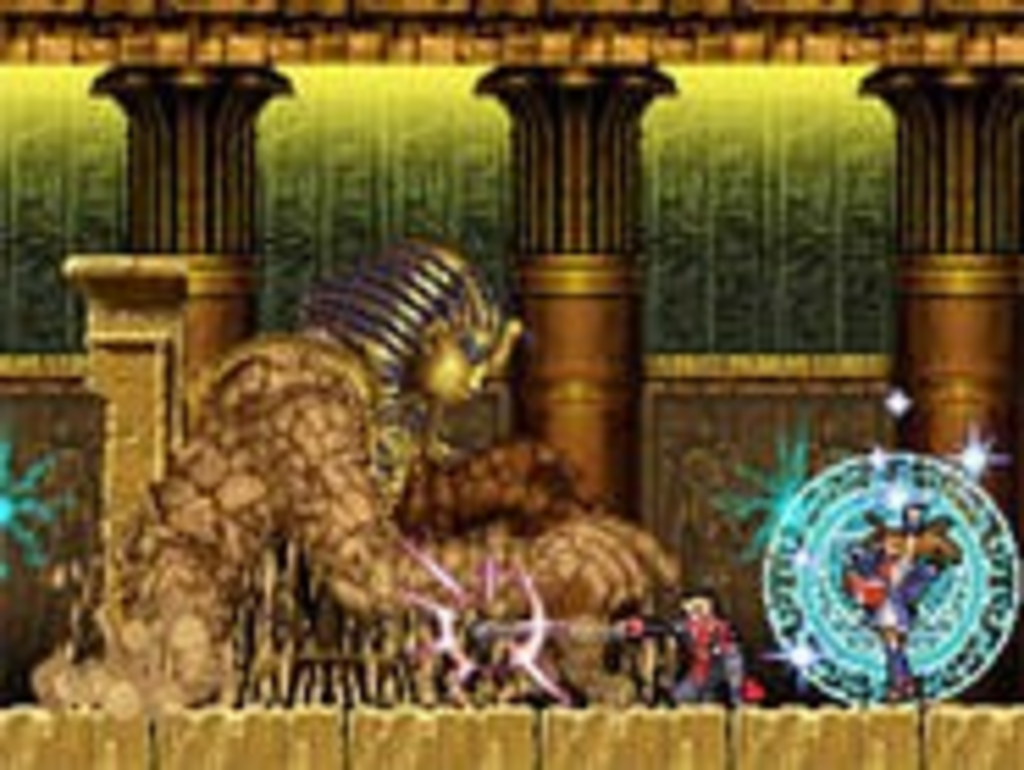 It’s been 20 years since the first Castlevania bewitched gamers with its gothic horror. Twenty years of vampire hunters going fist to fang with Lord Dracula.

With almost two dozen titles in the series, Castlevania is one of the most enduring and beloved game franchises of all time. Castlevania: Portrait of Ruin, the latest entry in the series for the Nintendo DS, is filled with all the mazelike levels, medieval weaponry, and skeletons, ghouls, and bats that are the hallmarks of the series, but it also has enough new twists to keep things lively.

Portrait is set during World War II, when Dracula’s demonic castle of evil reappears to spread hatred and fear throughout the land. Playing as tag team Jonathan Morris and Charlotte Aulin, you must charge into the castle and slay its master, a vampire with the generically Teutonic handle “Brauner.” Why Brauner is squatting in Lord Dracula’s crib is not for you to question.

The team concept provides Portrait‘s most interesting innovation. Depending on the circumstances, the game allows you to switch between Jonathan and Charlotte or use both characters at once. Jonathan, meat-headed and quick-tempered, is the muscle of the duo. He wields heavy weapons such as maces, claymores, and, of course, the ubiquitous whip. Charlotte is a nerdy spellcaster. She can shoot balls of fire from her hands or recruit skeletons to fight for her.

Knowing when to use each character can be confusing at first, but eventually you get the hang of it. You’ll learn that Zacchino, an evil swordsman, will offer a rose to Charlotte but cut Jonathan down on sight. The game also presents plenty of puzzles for which you’ll need both vampire hunters to forge ahead; you’ll have to alternate between Jonathan and Charlotte to get past many of the brainteasers.

As you close in on your toothy quarry, the reason for Portrait‘s subtitle becomes clear. Brauner, as it happens, is not only a vile bloodsucking Kraut from hell, but also an art connoisseur. Around the castle, he has placed haunted portraits that act as portals to new levels. The portals expand the standard Castlevania environs beyond the typical spooky house offerings. One tele-portrait sends you to an Egyptian pyramid, where you’ll encounter stumbling mummies and one of those giant worms from Dune. Another picture leads to a mind-bending upside-down funhouse populated by zombie trapeze artists and killer clowns.

Just as satisfying is how the game plays on the DS. Castlevania has always worked best as a 2-D side-scrolling adventure, a format that adapts perfectly to a handheld. Although you won’t be jabbing enemies with your stylus, the game takes advantage of the DS’s two screens nicely. Up top, you get a handy map and an easy-to-navigate inventory of weapons, armor, and spells. The lower screen is where the action takes place.

Castlevania games have always made elegant use of a few simple controls — one button to jump, another to attack. The complexity is in the levels, honeycombed chambers stuffed with secret doors, treasures, and monsters of every ilk. The result is an enjoyable, creeped-out ride and arguably the second-best thing you can do with a leather corset and whip.