While One Time Productions ponders Arts or Crafts, Quality Hill Playhouse throws its Curtain Up 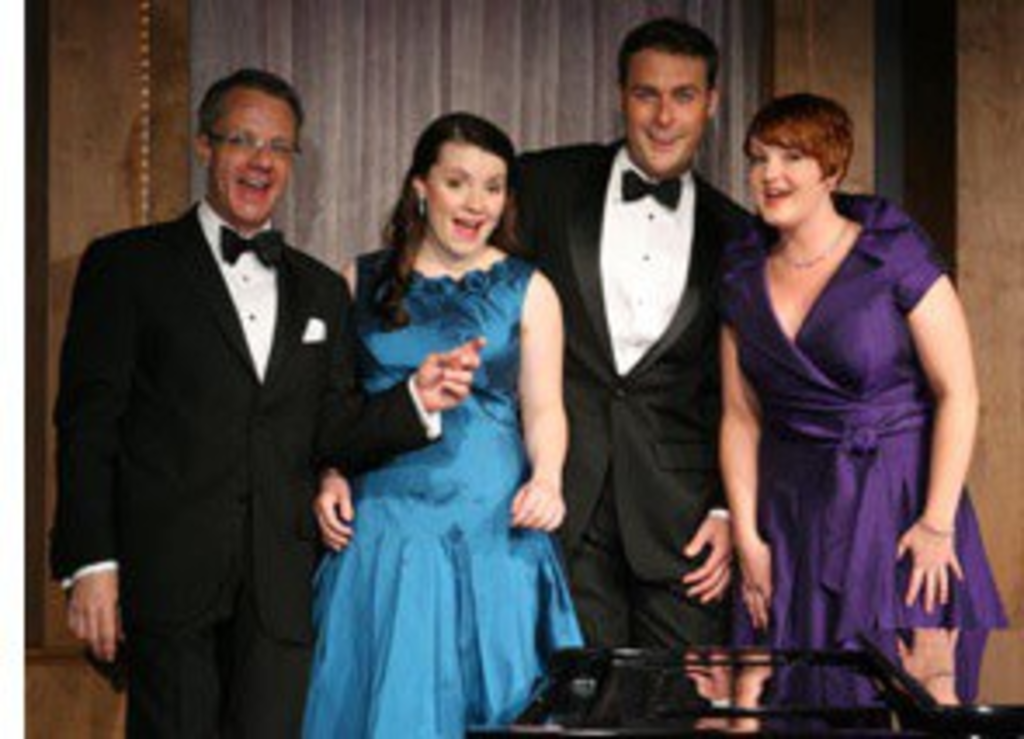 Because it boasts more theater than it has theaters, Kansas City could use a couple of more Bess Wallersteins. A producer, director and improviser, Wallerstein has revived the notion of “environmental” theater: shows performed in spaces that fit their settings. With her One Time Productions, she whipped up True West on a Brookside lawn and now has mounted Rob Roznowski’s contemplative sketch-comedy show Arts or Crafts on the upper floor of midtown’s H&R Block Artspace, a spare concrete gallery.

In 20-odd scenes, Roznowski toys with the titular question. What separates art from craft? Are the pots for sale at a craft show art? Is scrapbooking? Or crafting a sharp put-down of an actress in a review? Early in the show, the Mona Lisa describes herself as a mere exercise in technique; toward the end, a plumber explains how his work makes him feel like Michelangelo. One of my favorite bits starred the funny Ben Orscheln as a boy inventing merit badges for crafts that the Boy Scouts don’t honor. His first: “Starting your own bed and breakfast.”

The show’s chief virtues are Roznowski’s wit and egalitarianism. Katie Holmes shows up, as does New York Times critic Ben Brantley, and the world’s most passionate fan of community theater. As the latter, Janet Henry gives the evening’s singular performance, a crazed, escalating showstopper. Henry also dances a couple of times, a dash of welcome grace atop all the philosophical comedy.

A long scene at the end of the first act uses a fresh perspective to explore the repression of art. Yes, Roznowski covers the Taliban, the NEA Four and school libraries, but he also includes the dipshits who burned disco records and those who tell you that your hobby is a waste of time. Just when a scene verges on sanctimony, he corrupts it with a joke; just when a scene gets too jokey, he arrives at an insight.

Wallerstein stages this busy show with forceful clarity, and her actors are mostly up to their many, many roles. Still, it’s long — a minor failure of craft — and some sketches miss. One scene about a woman who’s furious that her boyfriend has sketched a nude in his art class is pat and unconvincing, but it’s saved by the versatile Chioma Anyanwu as a model who’s proud that she has become art.

As for what exactly art is, Roznowski and company make a cliffhanger of it. The rule that works for me: If audiences have to pay for it, it damn well better be.

God bless Irving Berlin, who found a way to turn craft to art and then into millions. And Cole Porter, who did the same but with remarks. And J. Kent Barnhart, whose first show on the refurbished stage at Quality Hill Playhouse is his freshest in recent memory. For Curtain Up, he presents Berlin, Porter and Gershwin not as august greats but as working craftsmen knocking out numbers for early Broadway shows like Oh, Kay! and Hitchy-Koo of 1919. Barnhart obliges our expectations with “Someone to Watch Over Me” and “Alexander’s Ragtime Band,” but he also gives us grand surprises.

Berlin’s “I Don’t Wanna Be Married, I Just Wanna Be Friends,” from 1932, upends many cultural assumptions about a more innocent past. The same applies to a pair of sparkling Cole Porter songs about prostitutes, as well as the gossipy treat “My Cozy Little Corner in the Ritz,” a number so obscure that Barnhart had to write to the Porter estate for sheet music.

Barnhart pairs this inspired selection with inspired casting. Boyish, reliable Seth Golay glides through the lighter material, but then he sings his guts out on “Without a Song” and Show Boat‘s “Make Believe.” Kansas City newcomers Izzie Baldwin and Molly Hammer would be standouts in a lesser cast. Baldwin invests her comic numbers with a light operatic touch but also owns the blues; Hammer brasses through a Fanny Brice song, gets lowdown on Porter’s hilarious “Find Me a Primitive Man,” and then breaks hearts with such power on “Can’t Help Lovin’ That Man” that Barnhart calls her back out because we keep applauding her.

Barnhart’s introductions are chattier than usual, which is welcome. He packs them with lively anecdotes and dry asides, and the history is sometimes fascinating. Introducing Victor Youmans’ great “Without a Song,” Barnhart addresses the minstrelsy and racist lyrics common to early Broadway. (Christ, Berlin was still working up blackface numbers in the midst of World War II.) None of the offending words turn up in the show, but I must confess to curiosity: Am I alone in wishing for a show that dares to examine this dark stain on the American songbook — the true forbidden Broadway?