Whether it’s in the Unicorn’s Grey Gardens or Egads’ Satan, life’s a tragedy 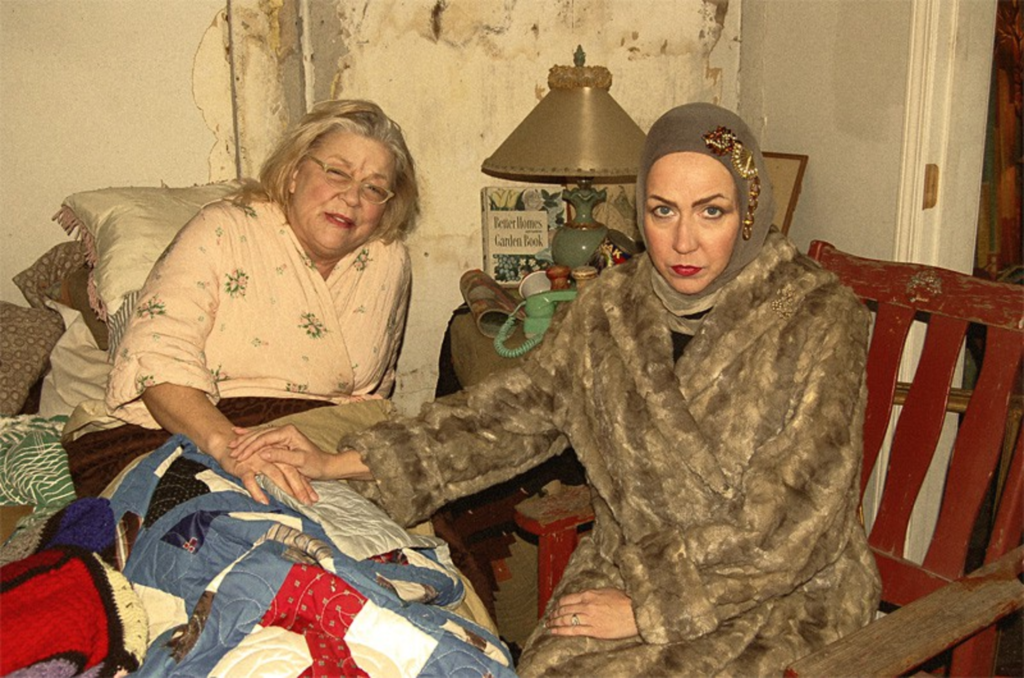 The tragedy of Big Edie and Little Edie Bouvier Beale is a great American story — part mystery, part gossip and part whatever the hell you want to read into it. The Edies, an aunt and a cousin of Jackie O, were East Hampton socialites who let their lives and their home descend into squalor. The decline was recorded in Albert and David Maysles’ compelling 1975 documentary, Grey Gardens.

Their setbacks — the mom divorced, the daughter spurned — are entirely understandable. What isn’t: How such lively, privileged women are reduced to flea infestations and cat-food dinners.

That question undoes the first half of the Unicorn Theatre’s Grey Gardens, an off-Broadway hit musical based on the Maysles’ documentary. After a hair-raising prologue, the show attempts to give us the splendor of 1941 Hamptons life and, unfortunately, the back story.

The attempts at psychological explanation — as in most dramatized accounts of eccentrics or geniuses — are reductive and unsatisfying. Here we see mom and daughter prepping for a party celebrating the romance between young Edie (Lauren Braton in the flashback) and golden Joe Kennedy Jr. (Brandon Sollenberger), who’s destined for the U.S. Senate and the presidency after the war. Cue the disasters. Big Edie (Cathy Barnett), a showboating pill, insists on treating the guests to a concert’s worth of songs. After Little Edie objects, the mother spills enough family secrets to scare off the Kennedy boy. Meanwhile, Big Edie’s husband wires that he wants a divorce. Through all of this, the Edies squabble and then make up with a creepy, needy passion.

The tone varies from parody to pathos; the choreography (by director Nedra Dixon) is perfunctory; and the splendor proves beyond the reach of the Unicorn’s designers. Kennedy is a jutting-chin cartoon who tacks between lovelorn simp and ambitious cad but never resembles a young man who might be both at once. Save a cute vaudeville number from Barnett, the show just comes to life right before intermission, when the actresses playing the Edies are set loose to play true and complex feelings.

Even then, their lives feel too boiled down, as if this one day explains the tragedy to come. In the second act, that tragedy turns out to be a much better time. Elegance isn’t the Unicorn’s bag, but fallen elegance — now we’re talking.

Rich and mostly plotless, the second half presents Barnett (now the daughter) and Kathleen Warfel (playing Big Edie) as the half-mad women haunting a house that’s rotted through like a November jack-o’-lantern. They’re great. The songs improve, hewing close to words that the real women speak in the documentary. And the bed-bound Warfel singing a stream-of-conscious number about boiling corn on a hot plate is a thrill. Even Sollenberger, who’d been hapless as Kennedy, offers quiet, soulful work as a local handyman who checks in on the two ladies.

The second half stretches on for about an hour. It’s tragic the way life is, not the way middling plays insist life is.

Also somewhat tragic is Say You Love Satan, a trifle that the estimable Steven Eubank has selected to launch the first season of his new Egads Theatre Company. In it, a Dostoevski-­obsessed doctoral candidate named Andrew falls for a guy claiming to be the devil’s son. A taste of his wicked power: The devil’s son convinces a night-club doorman that he and Andrew are Sarah Michelle Gellar and Freddie Prinze Jr. Is this a stale joke about stale celebrities or a burlesque of a stale joke about stale celebrities?

Anyway, they date for two months before Andrew bothers to ask any questions about the whole scion-of-hell thing, which beggars the mind in ways that author Roberto Aguirre-Sacasa’s goofy premise doesn’t. In stories of the fantastic, people should still behave like people.

Complications ensue. Andrew grows distant from his best friend (Natalie Liccardello, who aces flimsy material) and the nice medical student who wants to be his boyfriend (Sam Wright). Playing Andrew, Taylor Gozia is charismatic and radiates intelligence, especially when summarizing passages from The Brothers Karamazov. Evan White looks great with his shirt off but lacks the power and confidence for the role of the devil’s son; he also has little sense of how to time comedy.

After almost two hours of unsteady pacing and limp jokes (sometimes about limpness), the excellent Doogin Brown, in tight white pants, interrupts an infernal ritual as the voice of God himself, and the show ends better than it started. There’s a baby in the ritual, of course. As the devil’s son points out, babies are to satanic ritual what olive oil is to Italian cooking. That’s not a bad crack, but in stories of the fantastic, devils should act like devils, not like writers sweating over one-liners.