Where “Defund the Police” and the tone police cross paths 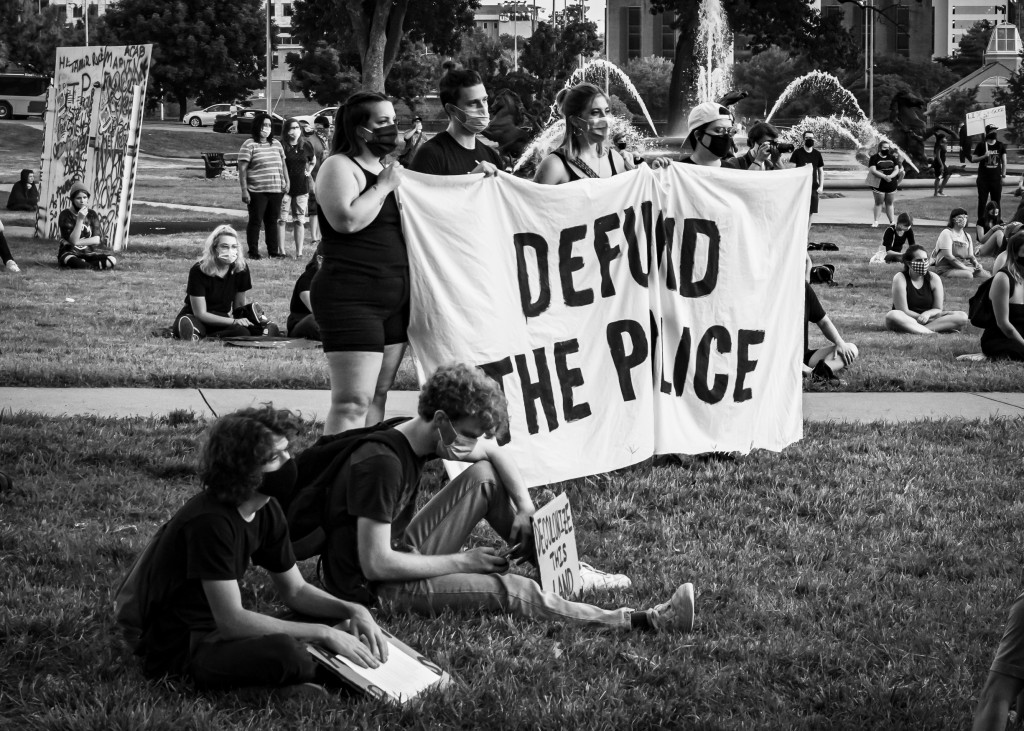 From a public relations perspective, “defund the police” is a powerhouse.

“Defund the police” outstrips “demilitarize the police” by 100 to 1 in Google trend rankings. It’s been a Twitter trend. It’s compared to “Medicare for All” and “Yes We Can,” with Emily VanDerWerff arguing in Vox that it’s equally as potent as “Make America Great Again.”

It’s not just the far-right attacking “defund the police.” Left-leaning leaders are struggling to defend it, even when they support its meaning. Political communications scholar George Lakoff called it “a terrible phrase.” George Takei and John Oliver mocked it. The Young Turks’ Cenk Uygur tweeted on June 14, “Let me pick up on what @staceyabrams just said. #DefundThePolice slogan is being used to divide us.”

If anyone knows what “defund the police” might look like, it’s a public school teacher. Americans have witnessed the defunding of public education for years. The Republican Party is skilled at defunding: Republicans in Congress voted more than 20 times to defund the Affordable Care Act. Kansas Republicans created the “great defund experiment.” Missouri Republicans defunded reproductive health care so well, they caused a surge in syphilis.

The debate around “defund the police” is the latest in a string of efforts, led in part by right-wing leaders and media, to intentionally divide Americans around race. We’ve been here before. In The Wrongs of the Right: Race and the Republican Party in the Age of Obama, authors Matthew Hughey and Gregory Parks found Fox News and its pundits consistently pushed division around race throughout the Obama Presidency. Donald Trump made headlines for attacking Obama’s birth status (it seems so tame today, compared to Trump’s penchant for white supremacist statues and “white power” videos).

Even Obama’s tan suit became a subject of controversy.

In the wake of the heartbreaking murder of George Floyd, Fox News’ racial divisions have become more transparent. Tucker Carlson’s on-air litanies include saying the Black Lives Matter movement doesn’t care about Black people, that national protests are part of an “ancient battle” between “thugs” and “normal people”—and he even encouraged vigilante justice. Nine advertisers pulled from his program in protest, but he is still on the air.

The ongoing debate around the phrase “defund the police,” whether from the left or from the right, provides a textbook case of tone policing. Tone policing refers to silencing or dismissing someone based on how they look or sound, regardless of what that person is saying. If someone seems too emotional, “too angry” or “too loud,” then their argument isn’t worth hearing at all, according to the tone police.

“Defund the police” has been attacked because of how it sounds — not what it means. Not uncoincidentally, tone policing came into the national consciousness in part due to the Black Lives Matter movement. It gained widespread popularity in 2015 through a comic published on Everyday Feminism. The movement’s founders—Patrisse Khan-Cullers, Opal Tometi, and Alicia Garza—sit at the intersection of Black, feminist and queer identities, and were (and are) frequently subjected to tone-policing.

Symbols can be tone-policed as well. Colin Kaepernick’s kneeling was attacked not for the substance of his protest—a protest against police brutality—but for being in the “wrong place.”

Those wanting to avoid tone-policing should start getting curious about the larger context they’re part of, suggests Brittany Harris for The Inclusion Solution. Instead of shutting down the discussion, Harris recommends asking questions such as: “What power dynamics are at play in this situation? Am I impacted by this issue or injustice? How am I feeling after hearing this, and why am I feeling it? If I center my feelings over their experiences, who wins… what will be the outcome?”

These questions can help in our personal lives but are especially crucial for talking heads, communications scholars, and media analysts. Is it fair to hold “defund the police” to the same context as, say, “I’m Lovin’ It?” Genuine grassroots movements don’t emerge from multi-million dollar marketing campaigns, nor should they.

“Defund the police” is vastly different from popular political phrases like “Yes We Can” and “Medicare for All,” even though it’s as potent. “Yes We Can” is a positive aspiration that intends to mobilize millions of people to vote. Social movements seeking to end the systemic oppression of marginalized people, by comparison, rarely share that privilege.

Phrases like “Black Lives Matter” and “Defund the police” are weighted with added meanings around white supremacy and dismantling racism. These are hard topics for some people to handle, no matter how nicely the topic is raised. Centering the feelings of those who struggle to discuss the issue, however, is a failure to admit or fix the problem.

Pete Buttigieg, the nation’s first openly gay Democratic Presidential candidate, knows what it means to experience homophobic prejudice and harassment on the campaign trail. His solution to unreasonable attacks? Stick to your values.

On June 26, Uygur reposted his anti-#defundthepolice Tweet, adding: “I’m done. … I already largely agreed with the substance of the argument & now I’m down for the framing, too. There is no reform or transformation that can fix this. We have to start over and completely rebuild policing in this country.”

While a few far-right pundits may continue to divide, the rest of us—conservatives, moderates, centrists and leftists alike—don’t have to play along. Tone-policing “defund the police” does nothing to solve police violence. In fact, it’s the opposite. If our goal is to solve police violence, let’s keep redirecting the conversation to what really matters: Black lives.

keep seeing this on tv and its so goddamned craven that it veers into the hilarious. there's another version that just overlays pictures of Biden with a mask on which is somehow even dumber. incredible thing for the president's campaign to spend money on. https://t.co/KaO24eW9kl