‘Where are we gonna go?’: New jail to displace over 100 Jackson County residents 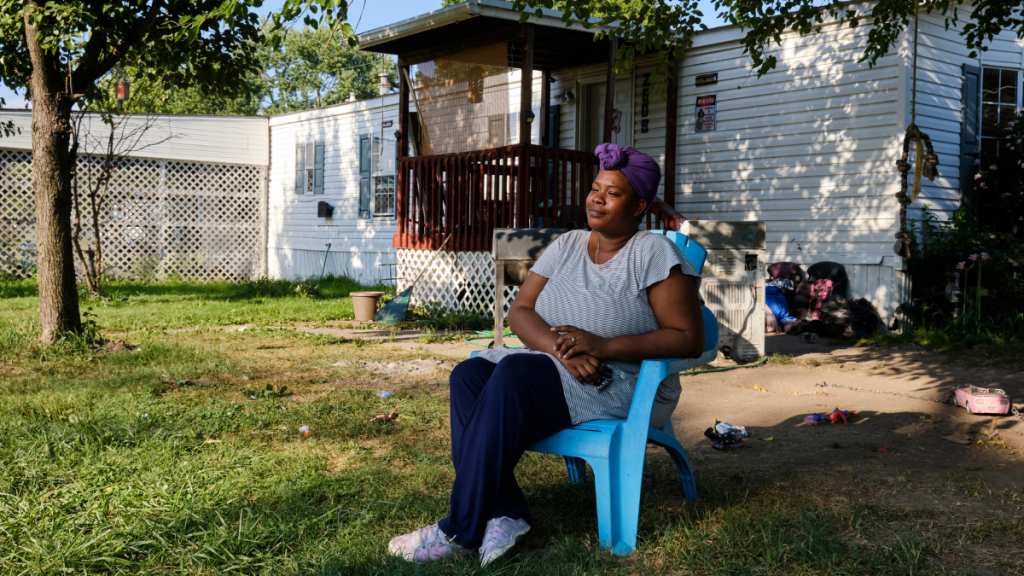 RoNisha Rogers lives in a two-bedroom trailer with her husband and seven kids at Heart Mobile Village. She will have to find a new place to live by next February. // Courtesy of Dominick Williams, The Beacon

For more than a hundred residents at Heart Mobile Village in eastern Jackson County, Missouri, the neighborhood has been many things: a chance for a new start, a path toward owning a home, a place to raise a family.

But come February 2022, the residents in this community of RV trailers and mobile homes will be displaced — the 107 acres they call home will become the future site of the new Jackson County Detention Center.

She’s been distraught since hearing the news a few weeks ago.

“Most places don’t really want to bring in seven kids,” Rogers said. “They just don’t rent to people who have big families. On top of that, we’re on a fixed income here, so we don’t have a lot of options.”

Moving also means leaving her neighbors. Rogers describes Heart Mobile Village as a place where neighbors help her get into her locked car, and where her kids help older neighbors take out the trash.

“All the neighbors here are nice,” Rogers said. “Everybody talks to each other, everybody helps each other out.”

Jackson County paid $7.05 million to purchase the property at 7000 E. U.S. Highway 40 from Park Holdings Inc., a real estate company based out of Wichita, Kansas. The purchase was approved unanimously by the Jackson County Legislature on July 12.

For the county, it’s a huge step toward its goal of building a larger facility to address overcrowding issues at its current jail — a problem that one study said has existed since the current facility opened in 1984.

But for Heart Mobile residents, it means uncertainty about the future.

“In the nights, we can’t sleep,” resident Samuel Pinedo said. “I mean, we sleep four hours, and we wake up and then start thinking about it: What are we going to do? And what is going to happen? I mean, we don’t know.”

Pinedo has been living in his double-wide trailer since 2009 with his wife and three sons.

“The last thing we want is to lose our house,” Pineda said. “Because where are we gonna go?”

In recent months, before the deal was finalized by the county, Rogers said property managers told her and other residents they wouldn’t sell the property. A copy of a letter sent to residents before July from property management said the site is not under contract for sale.

Heart Mobile Village then sent another letter July 12 confirming the sale of the property to Jackson County.

The letter acknowledges that the management initially had “intended to keep the property and grow it.” Park Holdings did not respond to The Kansas City Beacon’s request for comment.

Mussa Mfaume, 34, moved into his mobile home last summer after he lost his job during the pandemic.

Without work or a steady income, it was difficult for Mfaume to find an affordable place.

Mfaume planned on living at the mobile home park until next summer. Now, he said it will be difficult to move out within the coming months, especially with rents rising in the Kansas City metro area.

A letter from Jackson County sent to Heart Mobile Village tenants says the county anticipates taking over the property in mid-August. The letter states that tenants must continue to pay rent in the months before the move-out deadline of Feb. 28.

According to the letter, Jackson County will pay to have personal possessions moved. For trailer owners, the county will pay to move the trailer. Renters and owners are also promised up to $5,000 for housing assistance.

Brian Gaddie, director of public works, said Jackson County is committed to ensuring all residents are treated respectfully and fairly, adding the county will look at residents’ individual needs.

“This includes providing support they need to make the relocation as easily and successfully as possible,” Gaddie said.

The county is still working on an official plan to help residents. Gaddie said it’s important that the county maintain a good relationship with tenants and that the process is not disruptive.

“It’s not an ideal situation,” he said. “Especially from a development standpoint, this is not something you look for. … We’re going to do our best to make good on the residents and local community.”

Why does Jackson County need a new detention center?

In six studies commissioned by the county, the conclusions were the same: The current Jackson County Detention Center at 1300 Cherry St. in downtown Kansas City is “crowded beyond functional capacity levels.”

People incarcerated there are either booked by the county, Kansas City or the Kansas City Police Department. The current detention center has a capacity of 884 beds, with additional overflow capacity up to 1,154.

Last April, at the beginning of the pandemic, the jail population decreased to 739 people as the county released people with misdemeanors and those with low bond amounts. But estimations conducted by the county and the team behind the new jail projected the need for 1,244 beds by 2035.

The new location needed to meet certain parameters, he said.

“It needed to be kind of a cost-effective and easily maintainable site,” Gaddie said.

Gaddie said the county whittled its list down this March. By May, the county began contractual discussions, and the site at 7000 E. U.S. Highway 40 was a front-runner.

The detention center is set to be complete by fall 2024.

Since Jackson County announced the purchase, Heart Mobile Village residents have put together a list of demands for the county. Housing justice group KC Tenants has recently been helping to organize residents.

These include cancelling rent for the remainder of their time on the property and a payment of at least $10,000 to each household.

Residents are also demanding compensation packages in addition to the $10,000, which can encompass paying the full cost of trailers if they cannot be moved, compensating residents in rent-to-own agreements matching their accumulated equity, paying for movers or paying for trailers to be moved to a new location.

If the county agrees to the demands, it would help residents like Rogers, who has been renting to own her trailer since her family started living there. A stay-at-home mom, Rogers won’t get that money back under current arrangements.

“I’ve never in my life thought that I would be displaced out of my house by the city,” she said. “You hear about stuff like that, but you don’t think that it’s gonna happen to you.”

Rogers makes a monthly payment of $386 toward owning the trailer and an additional $400 to rent the property.

“I would like them to buy me out instead of just making me leave for free,” Rogers said. She also wants the money she invested in her trailer returned.

Toi, who declined to give her last name, doesn’t think the $5,000 promise from the county is enough.

“Find me somewhere else to live,” Toi said. “Not help me move my house, like actually help me find a house.”

Now, she said it feels like she’s being forced back into the same situation she just got out of.

“I feel like I’m really walking on hot coals,” Toi said. “I can’t get comfortable. I can’t settle down like I’m wanting to.”

Discussions with the county have made Toi feel like officials are not putting residents first.

“I bet you there’s people that grew up here,” Toi said. “Regardless of how you want to look at this trailer park, you know, these are people’s homes.”