Whenever you take a break from Black Mirror, there’s Dreaming Purple Neon, Evil Dead and other gory weirdness this week 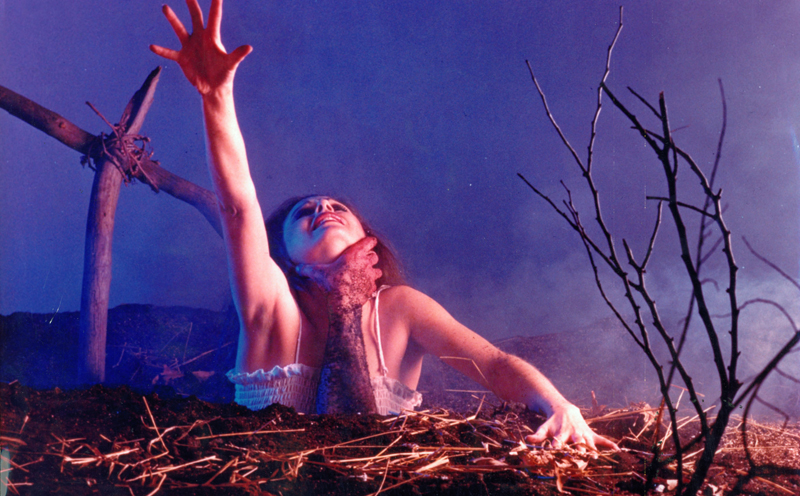 Halloween’s almost here, and there’s an embarrassment of awesomeness to choose from tonight. The final free outdoor screening at Cinder Block Brewery is tonight at 7, and it’s a good one: a squirm-inducing double feature of 1981’s Evil Dead and the better-than-it-had-any-right-to-be 2013 remake. Also at 7, at the Alamo Drafthouse, Austin, Texas, quartet Invisible Czars performs live accompaniment to one of the most haunting movies ever made, F.W. Murnau’s Nosferatu. For my money, that 1922 silent classic is still the creepiest vampire movie ever, and nothing beats a live score.

The third and likely last season of the The Fall, originally broadcast on the BBC, drops today on Netflix. The first two excellent seasons chronicled the pursuit and arrest of a family-man-turned-serial-killer (50 Shades of Grey’s Jamie Dornan) by a Northern Ireland police detective (Gillian Anderson), but also went to great lengths to show the psychological torment on both sides. These six new episodes promise to go even deeper in that direction, as a case is mounted and a possible linkage to more victims is revealed.

If you were as let down by the Magnificent Seven remake as I was, take a look at the smaller-scale and infinitely more rewarding In a Valley of Violence, showing now at Screenland’s Tapcade. Like Seven, it’s a Western starring Ethan Hawke. Unlike Seven, though, it has a black, subversive sense of humor and several laugh-out-loud moments. Writer-director Ti West is going for Sergio Leone lite, and he pretty much achieves it, with a surprisingly good John Travolta doing his most convincing work in years.

With Samantha Bee’s incisively funny Full Frontal and Jason Jones’ quirky road-trip sitcom, The Detour, TBS seems like a Jon Stewart–Daily Show grad school. It’s worked out well for all involved so far, a good sign for tonight’s premiere of People of Earth, a comedy about a support group for alien abductees that’s headlined by Wyatt Cenac. Set your DVR and watch it after you run out of Halloween candy.

Writer-director Kelly Reichardt has a knack for bringing quite ordinary people to life with uncommon empathy, and her new movie is no exception. Laura Dern, Michelle Williams and Kristen Stewart are in low-key mode against a plaintive Montana backdrop in Certain Women, a meditation on their characters’ lonely lives. Adapted from a collection of Maile Meloy short stories, it unfolds at a measured pace. The quiet, absorbing film — a fine weeknight choice — opened at the Tivoli Friday night.

The two-year dormancy of the UK cult phenomenon Black Mirror has officially ended. Thanks to a rediscovery after Netflix started airing the first two seasons, the tech-centric, speculative sci-fi anthology series has made the jump from being produced by Britain’s Channel 4 to being a completely Netflix-funded affair. Season 3 is as satirical and twisty as ever (and fully deserving of all those Twilight Zone comparisons), with a host of top-tier Hollywood talent, including directors Joe Wright (Atonement) and Dan Trachtenberg (10 Cloverfield Lane) behind the camera. On Netflix now, Black Mirror has already been renewed for a fourth season.