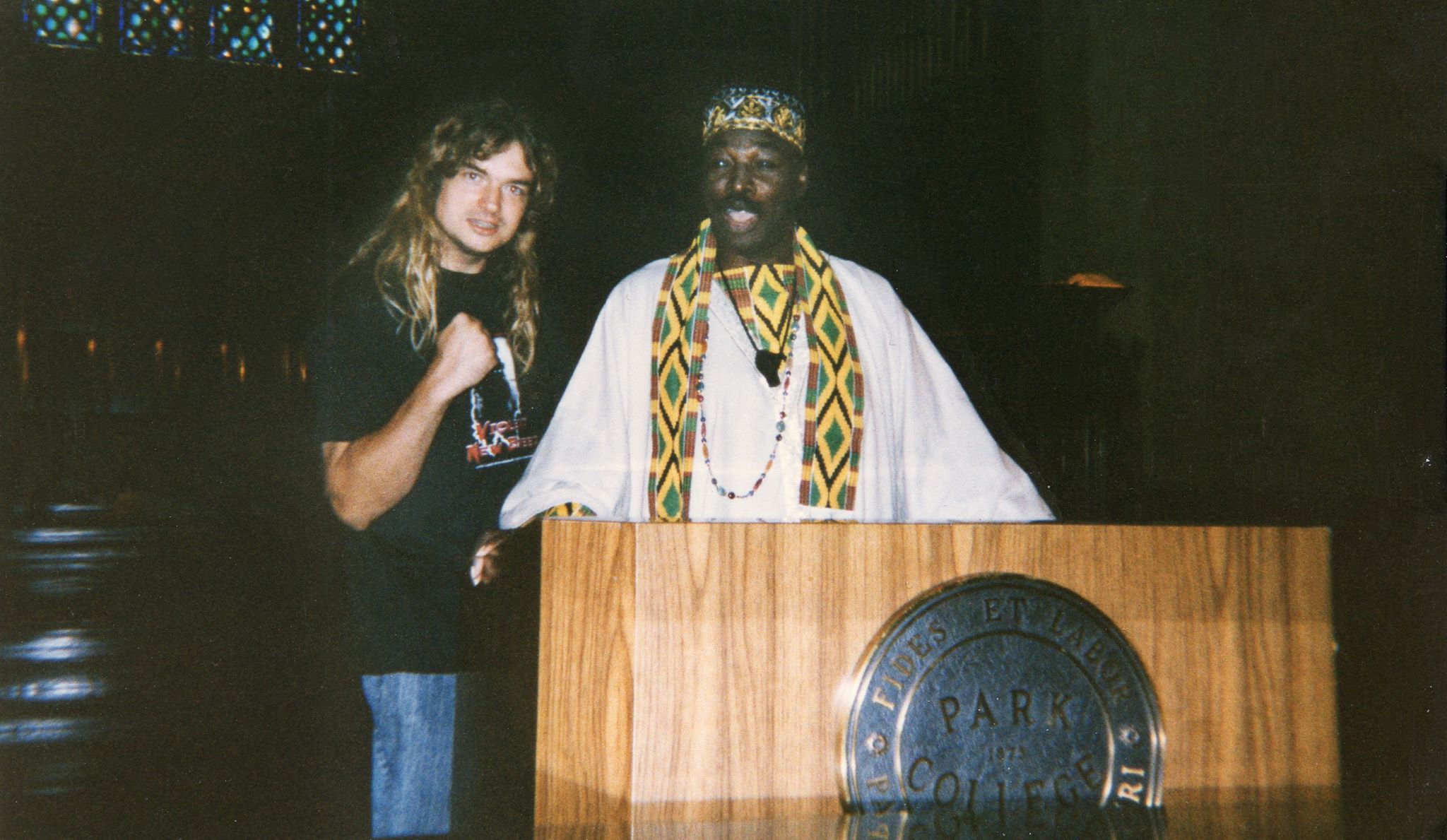 Sheets with Moore during the filming of Violent New Breed. // Photo courtesy of Todd Sheets.

Best known for his pseudo alter-ego Dolemite, comedian and proto-rapper Rudy Ray Moore died 11 years ago, but his impact on popular culture lives on. Moore’s DIY approach to raunchy comedy albums (his oeuvre includes such subtle titles like Eat Out More Often and Cockpit) and independent films like Dolemite, Human Tornado, and Disco Godfather were an inspiration to heavyweights like Snoop Dogg, Chris Rock, and Eddie Murphy.

Murphy, in fact, is currently enjoying some of the best reviews of his career for playing Moore in the new Netflix biopic Dolemite Is My Name. In the film, Murphy reenacts how Moore went from being a fortysomething failed singer managing a record store to creating a unique style of comedy that combined technical ineptitude (you never have to guess where the boom mics are “hidden,” and bad guys fall from punches that miss them by several feet) with intentional silliness.

Moore grew up in the Midwest—born in Fort Smith Arkansas, he also lived in Akron, Ohio, and Milwaukee, Wisconsin—and had some surprising ties to Kansas City.

In the Seventies, KC was a crucial market for independent filmmakers. The local distribution company Thomas and Shipp Films released several future classics that Hollywood studios had ignored, bringing awareness of films like Monty Python and the Holy Grail and Halloween to theatergoers across the Midwest. Kansas City was also home to three major theater chains: AMC, Dickinson, and Commonwealth. Commonwealth was especially important for Moore because his movies played on multiple bills at drive-ins, and Commonwealth owned hundreds of drive-ins.

“The Heart Drive-In was well known for playing black exploitation pictures like Blackenstein and Dr. Black and Mr. Hyde, or Foxy Brown,” says Todd Sheets, a local indie horror filmmaker. “I loved that stuff. We would go and watch these movies. Rudy Ray Moore was in a lot of the movies we were seeing. They would be on triple bills.”

Sheets later recruited Moore to appear in his 1997 movie Violent New Breed. Moore was still active at the time but was devoting more of his time to stand-up comedy. His blaxploitation films weren’t as fashionable as they had been 20 years before. Moore was paid $1,200 to play a pastor who fights Satanic ghouls that are breeding an Antichrist in hopes of bringing about the Apocalypse.

Despite its New York setting, Sheets shot all of Violent New Breed locally. Car chases and even vehicle explosions took place in the West Bottoms. Moore delivered a fateful sermon confronting Satan’s minions in the chapel at Park University.

Moore—who brought his own costume to play the pastor and even rewrote the dialogue so that it would have the rhymes that Moore regularly delivered as Dolemite—stayed at the Muehlebach Hotel.

“They had this little area in the Muehlebach that was like a little night club,” Sheets recalls. “[One night] Rudy had decided to go in there and do an impromptu comedy routine. He was standing on top of this thing—I don’t know if it was a table or what it was—and the entire place was in an uproar.”

But when he wasn’t in performer mode, Moore was more subdued than the flamboyant Dolemite or Pastor Williams. 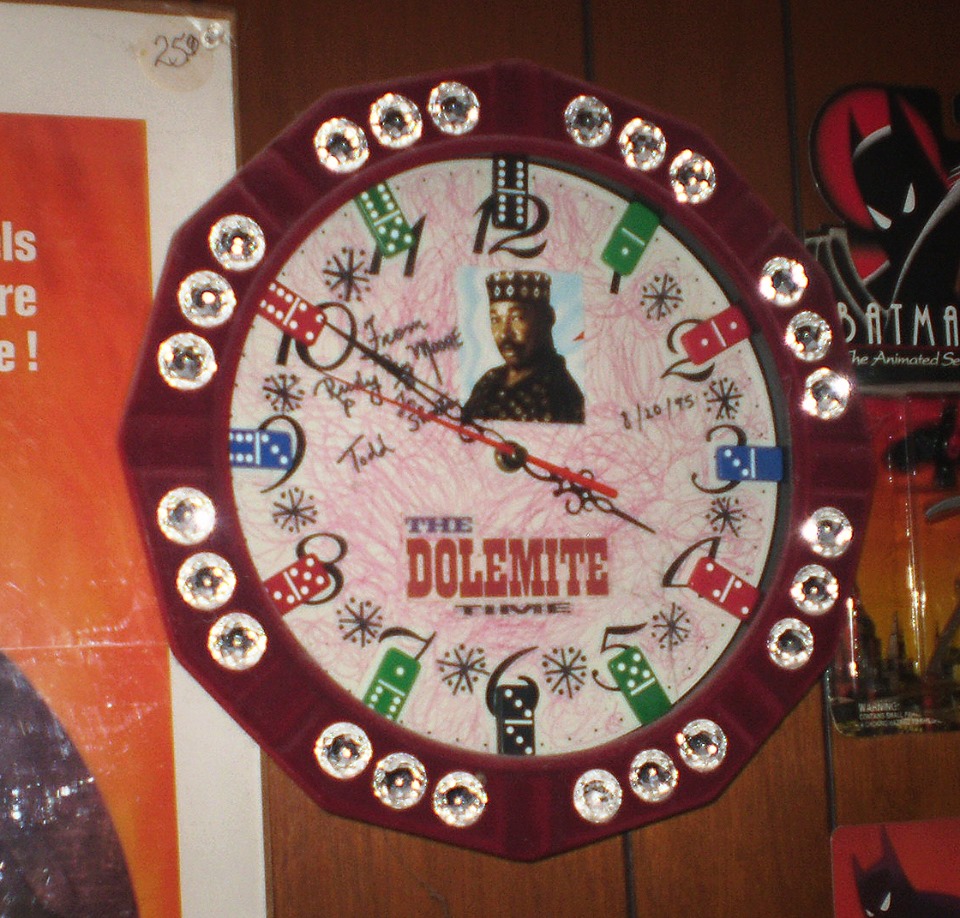 “There was a little bit of him in Dolemite,” Sheets says. “He was funny; you never knew what was going to come out of his mouth. But when we were eating dinner, he was so polite to waiters in the restaurant. He was that way to people in hotels. And Rudy used to make these hand-made clocks. They were these velvet clocks that had these huge rhinestones—these very gaudy, very Seventies clocks, and he made me one while he was in town. He signed it.”

Dolemite Is My Name features multiple examples of Moore’s flair for self-promotion—an essential skill due to the fact that his albums couldn’t play on the radio and had to be sold under the counter because of their salacious covers.

“He told me, ‘Todd, you’ve got to stick this movie under your arm, and you’ve got to take it and put it on the road and put it in front of people,’” Sheet, who stayed in touch with the comic until he died, says. “Every film since then, I’ve heard Rudy’s words, and I took that movie and banged on doors all over this country, and I did what Rudy did, which was put it in front of people. In the B-movie world—and I don’t mean that in any bad way, because I love the B-movie world much better—it seems like people make friendships, and they do bond, and they do stay in touch with each other.”