When becoming a KC doctor meant cutting up 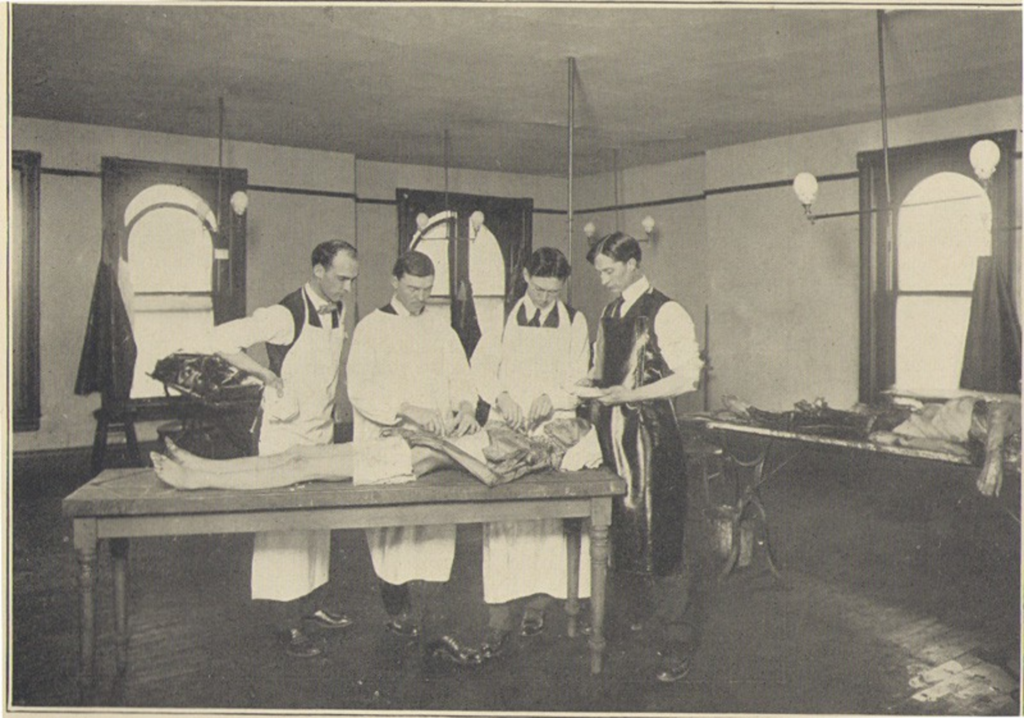 Everyone who complains about dating in Kansas City might be encouraged to know that it used to be much easier to meet a handsome young doctor. In the 1890s, Kansas City was home to 15 medical schools, second only to Chicago. This was freedom: If you wanted to open a med school, you opened a med school — nobody said jack. But as the 20th century dawned, meddling government put an end to these boom years, insisting on admissions standards, practical curricula, programs that took a full four years, and serious examinations for graduates.

Still, we can savor the free-market good times. Founded right here in “the metropolis of the West” in 1880, Kansas City’s University Medical College churned out doctors and nurses until 1913. According to this Scalpel, the college’s yearbook, UMC was the first “training school for nurses in the West” and the first obstetrical clinic in the United States. The yearbook insists: “Hundreds of men who have sought admission without sufficient qualifications have been turned away.”

But it also reveals the randy life that med students enjoyed in the days before socialism destroyed America.

Beneath lists of accomplishments studded with Greek letters, curious quotes honor each of the graduating seniors … and reveal something of their characters.

Ola Raymond Rooks, of 1321 Troost, is toasted as “a gentle boy, with soft and silken locks.”

Axel Isadore Anderson (2136 Summit) gets a loftier send-off: “Greater men than I may have lived, but I do not believe it.”

Best of all is W.B. Wiggins, from Coffeyville. “My only books were women’s looks, and folly’s all they’ve taught me,” the Scalpel editors write. They add that his alias was “the Nurses’ Delight” and throw in this bit of doggerel in a long poem titled “Senior Alphabet”: “W is for Wiggins of Hospital fame/The way he ‘cons’ nurses is surely a shame.”

Those nurses are also celebrated in rhyme, sometimes for achievements even greater than getting sexed up by Wiggins. Of Anastasia Bartel, an Ogden native in the sophomore class (motto: “When in doubt, giggle”), the editors write, “And Miss Bartel, so sarcastic and witty/An excellent nurse, but not very pretty.”

Miss Bess Jopling, of the senior class (motto: “Keep your mouth shut”), sounds like a lot of fun: “She is always truthful and tells what’s right/She was only over to her cousin’s last night.”

And now, some wisdom from Dr. Jas. E. Logan’s “A Word to the Prospective Physician”:

• “Kansas City has within its borders almost a thousand practicing physicians, and I venture the assertion that not more than one-fifth of that number are making more than a bare living.”

• “Above everything else, keep yourself clean in person, from the top of your head to the soles of your feet.”

• “Purchase a good horse and buggy.”

• “Join a golf club if one be in your community.”

• “Never advertise yourself or your business in any other way than by good example.”

• “Do not understand me to suggest that you conduct yourself in the community in any other way than becomes a gentleman.”

And now, we quote from a long and inexplicable list titled “Senior Traits”:

Name: Witten
Characteristic: Resuscitating the headless
Is by class ballot: A dago
Ought to be: In Italy

Name: James
Pet expression: When I was on the stage
Monomania: Coon songs
Is by class ballot: Manager of the Majestic
Ought to be: Chorus girl