What’s next for confirmed adulterer and accused blackmailer Eric Greitens? 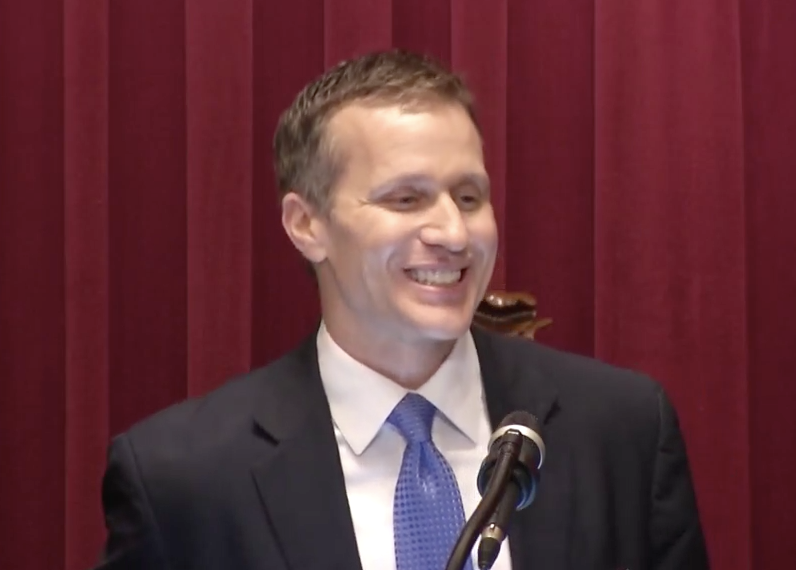 In one short year as Missouri’s governor, Eric Greitens has shown himself to be a bully and a control freak.

This is the man who told a state senator, “I can see by your pupils in your beady little eyes that you’re afraid of me.” This is the governor who uses disappearing text messages to keep government business away from the eyes of the press and public.

Now comes an explosive news report out of St. Louis, where TV station KMOV aired tapes of a conversation in which a woman told her then-husband that Greitens bound her hands to an exercise machine, blindfolded her, took nude photos and threatened to put them on the Internet if she disclosed their affair.

Greitens admitted to an extramarital affair Wednesday but denied the blackmailing allegations. And, no question, KMOV’s story has some problems. But, unfortunately for Greitens, he has spent the past year establishing a pattern that makes the story difficult to dismiss.

KMOV and other news outlets over the past year have received copies of a March 2015 taped conversation between a man and his now ex-wife. The conversation took place several months before Greitens announced he was a Republican candidate for Missouri governor. Neither the woman nor the ex-husband would agree to be identified in a news story. And the woman apparently had not known her husband was taping her. Those ethical problems stopped several media outlets from reporting the story until now. After KMOV aired the story on its 10 p.m. broadcast Wednesday — shortly after Greitens completed his annual state-of-the-state speech — other outlets followed.

The woman says on the tape that she had “a crush” on Greitens and agreed to meet him at his house “to talk.” He persuaded her to go to his basement, saying he would show her “how to do a proper pull-up.” (It figures that even a scandal involving Greitens would somehow involve working out.)

The woman tells her husband, “he used some sort of tape, I don’t what it was, and taped my hands to these rings and then put a blindfold on me.”She said he stepped back and she saw a flash through the blindfold. She said Greitens told her, “you’re never going to mention my name, otherwise there will be pictures of me everywhere.”

The woman said that Greitens soon after apologized and said he had deleted the photos. A lawyer representing Greitens said Thursday that he never took a photo, and never threatened the woman.

We again must confront a familiar scenario: the word of a powerful man against that of a woman. And this woman — not a powerful person; she worked in a beauty salon — is unwilling to go on the record with news organizations or reveal her name. And we have a jilted ex-husband as a source. As #metoo stories go, this one is messy.

But we do know that Greitens has spent the past year interspersing a show of a virtuous family life with brute displays of power. His Facebook page is replete with photographs of Greitens and his wife with their two young sons. Just last week he put up a post quoting Scripture. But those feel-good photos aren’t enough to mask the creepiness with which Greitens has conducted business. He lambasts and derides lawmakers of both parties in order to promote himself. He calls for ethics on the part of others while soliciting dark money donations for his future political ambitions. He mocks the mainstream media as “fake news” while issuing tightly controlled messages through social media channels.

All of this naked ambition, bullying and hypocrisy has left Greitens with few friends even in Republican-controlled Jefferson City. Certainly he has built up no cushion to weather a scandal.

By mid-morning on Thursday, the foundations of the fast-track national political career that Greitens had worked on so energetically were already crumbling. Illinois GOP Gov. Bruce Rauner pulled a campaign ad featuring an appearance by Greitens. In Missouri, Doug Libla, a Republican Senator from Poplar Bluff, called for state Attorney General Josh Hawley to investigate the allegations.

Rattled and angry lawmakers used a convenient turn of inclement weather to adjourn for the week and hightail it out of town before noon. Greitens, who rarely talks to the press even under favorable circumstances, was referring questions to his lawyer. But the former Navy Seal, the governor obsessed with control, would seem to have lost his grip.