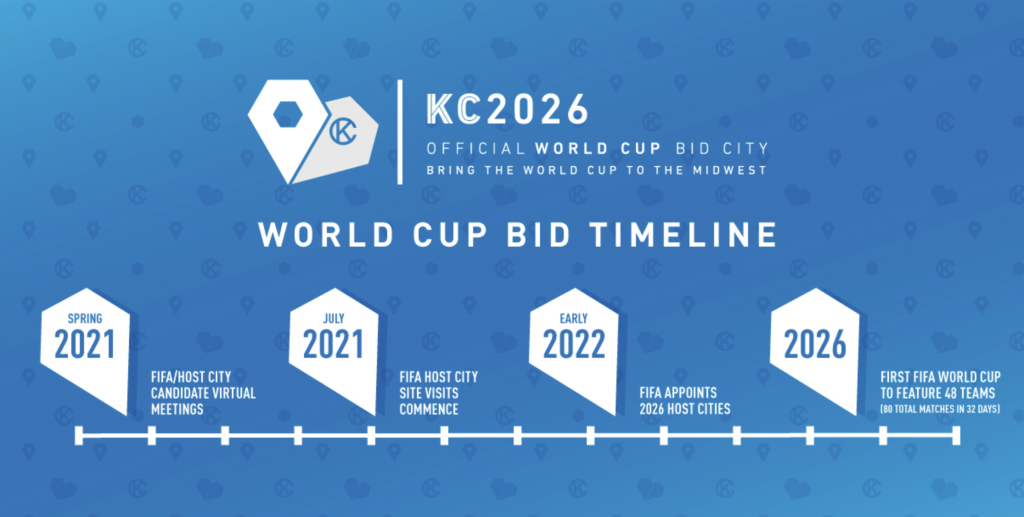 There is no bigger sporting event than the World Cup. The soccer tournament that takes place every four years almost transcends the idea of a sport. It’s a global phenomenon shared by billions of people. Four years from now, Kansas City may be one of the cities at the foreground of the tournament, as North America is set to host the World Cup in 2026.

Kansas City has been put forth as one of the sixteen potential host cities in the United States, with the KC2026: “In the Heart of It All” campaign being supported by local athletes like Patrick Mahomes and Salvador Perez. Other sites like Los Angeles and New York are most likely locks to be chosen as one of the host cities, with Kansas City coming in as one of the underdogs.

It’s hard to overstate just how massive it would be for the city to be able to host World Cup games, but KC2026 World Cup Bid Director Katherine Fox has some idea of the impact.

“There would be a sizable positive economic impact through job creation, and then tourism,” Fox says. “From a marketing impact, having Kansas City positioned on a global stage in a way that we could never afford to buy.”

According to FIFA, there was an average of 191 million viewers over the 64 matches for the 2018 World Cup in Russia. The average viewership of Super Bowl LVI was around 112 million according to NFL.com. Depending on what teams could potentially play in Kansas City, the type of viewership in the city alongside the influx of fans would be unprecedented for the city.

The set stadium for the games will be Arrowhead Stadium, home of the Kansas City Chiefs. The 2026 World Cup has allowed the cities to already have stadiums in place instead of having to build them in preparation.

“There’s modifications that have to happen to Arrowhead in order to accommodate the field,” Fox says. “From an environmental impact and economic impact, not having to build those structures from the ground up is definitely a positive thing.”

It also helps that Kansas City has an extremely passionate soccer fanbase. Sporting KC has a large following in the area, and its stadium Children’s Mercy Park has hosted numerous international games. Kansas City is also set to become the first city in the country to have a stadium fully dedicated to a women’s team, the Kansas City NWSL.

Fox, a Kansas City native and former Division III soccer player, has her own personal excitement over spearheading this bid.

“The prospect of working on the largest single-sport event in the world, and just being able to represent Kansas City in a way that elevates our market globally was just an opportunity I couldn’t pass up,” Fox says.

It is expected that sometime in mid-May the bid cities will be announced. As the day draws closer, Fox is still preparing some of the extreme amounts of paperwork that go into a city bid.

“Planning the site visit was six full weeks of managing details, with all of the training sites, the airport, hotels, and restaurants,” Fox says. “It’s really been about organizing those materials.”

The business impact of the bid will be massive for the city, especially in the Power & Light District, a neighborhood in downtown Kansas City that will surely bring in many fans. For Power and & Light District Marketing Manager Sami Cintron, the possibilities are very exciting.

“This would impact every aspect of our business, and have a huge impact on not only downtown but Kansas City as a whole,” Cintron says. “It is an absolute dream, and the Power & Light District is built for sports watching and hosting people from all over the world.”

According to Cintron, there are several marketing strategies that could be used. From paid social media campaigns to billboard placements, and even the ability to utilize streaming services.

Like Fox, Cintron shares a similar level of excitement over the potential hosting.

“I am extremely excited about the potential of the World Cup 2026. It would be incredible for my work, but also my hometown,” Fox says. “Kansas City deserves something like this.”

As the announcement draws nearer, Fox remains confident that this is something that could happen for the city.

“We put together an incredibly compelling bid for them to review. I think that this city turned out when FIFA was in town, which is great,” Fox says. “We have all the pieces in motion that are required to make this a very successful event. I’m very proud and confident in the chances that we have to be awarded host city duties.”