What to drink (including beer recommendations from Jeremy Danner), eat, watch and buy at Boulevardia this weekend 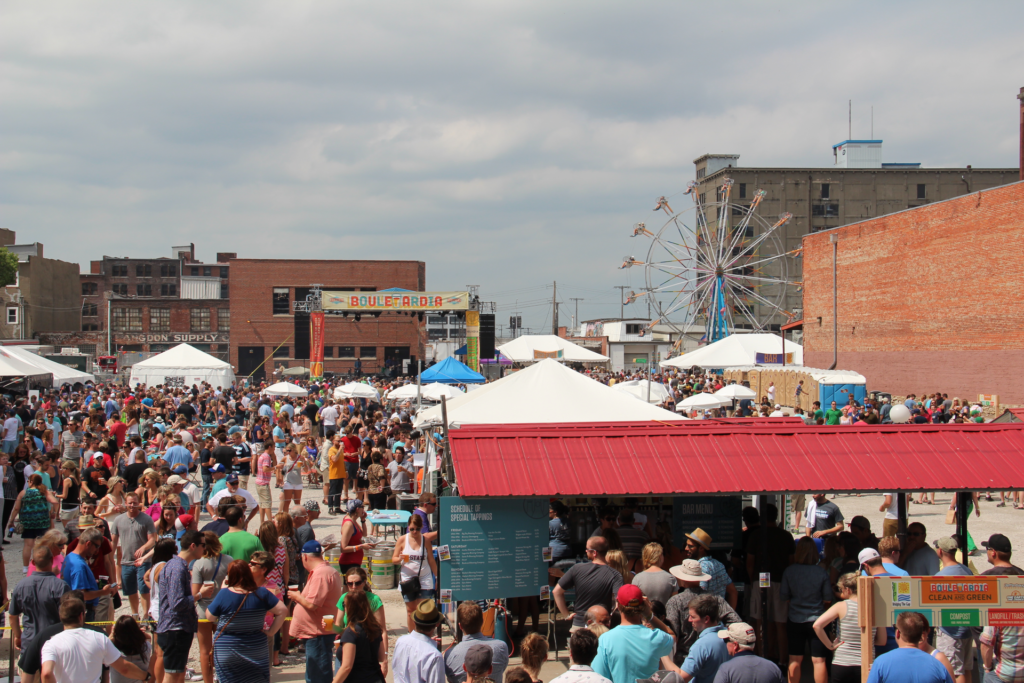 The fourth annual Boulevardia — which looks like the most ambitious yet — is almost upon us. GA ticket holders as well as those with special-events tickets will have more access to things to do, and of course, many, many things to drink. Here, in no particular order, are the things to look for at this year’s fest.

Festival organizers have picked up shop and moved the festival from north of 12th Street in the West Bottoms to the Stockyards district (a relatively minor distinction, sort of like saying you are moving from Kansas City to Westport), with rough borders from State Line Road to Genessee, and 14th Street to 17th. The new layout looks a little tighter but provides more opportunities for businesses in the area to join the festival. Voltaire, for example, is hosting two beer dinners, one each on Friday and Saturday nights. (Right now, the Saturday collaboration still has tickets available.) Amigoni Urban Winery is also getting in on the action.

The new layout also brings opportunities for much-needed shade. The one main drawback of the West Bottoms/Stockyards during a summer festival is the abundance of man-made surfaces — which seem to radiate heat. If you’ve been hot and uncomfortable at past Boulevardias (as I have), head into the Cellar, located in the first floor of the parking structure on State Line Road (the big white thing on the left side of the map below). The Cellar is available to GA ticket holders, and is also a place to find Smokestack and Duvel offerings (more on this later). For anyone who ponied up for VIP tickets, additional covered areas are available in the Hy-Vee VIP area on the second and third stories of the structure. (Friday VIP tickets are still available.) 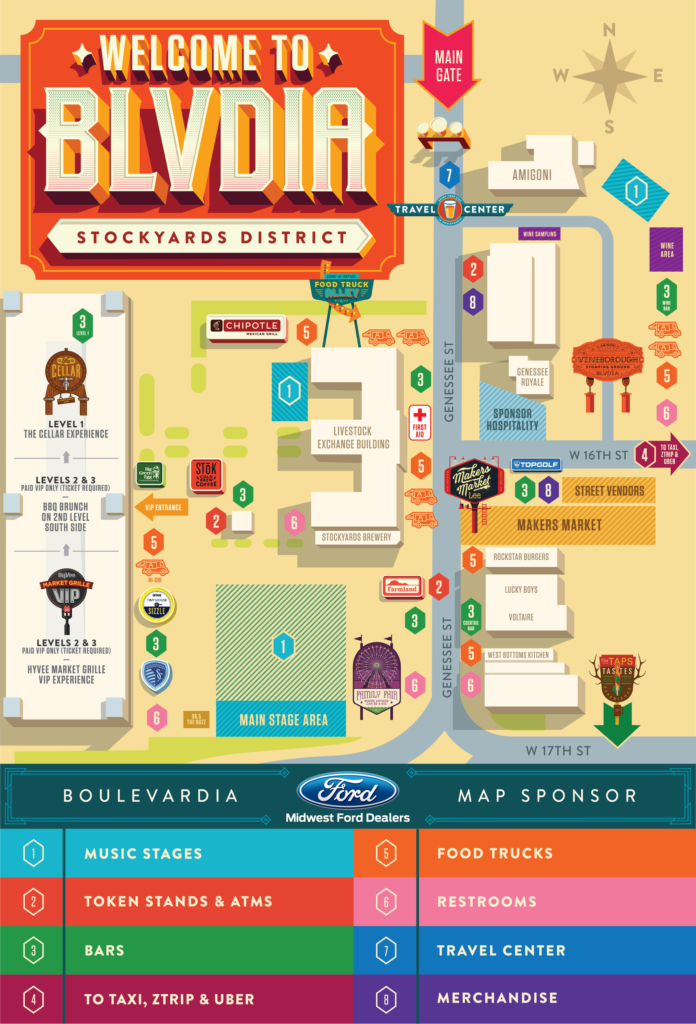 The Cellar is a big draw for the GA crowd. Smokestack offerings from Boulevard will be available here, including Love Child sour beer, Saison Brett, Bourbon Barrel Quad and more, as well as Duvel Single and Leifmans Fruitesse (a beer highly regarded by Boulevard brand ambassador and general Twitter hero Jeremy Danner).

Propped up right outside of Voltaire and Lucky Boys will be the Beer Cocktail Bar. Four unique beer cocktails, designed by Liquid Minded Concepts (Brock Schulte, Mark Church and Brandon Cummins) and executed by KC U.S. Bartending Guild bartenders, will be available.

This year, a big first is the inclusion of Amigoni Urban Winery. A dedicated tasting area, just across the street from Amigoni’s permanent tasting room, is available, with a wine garden of sorts (called “Vineborough”) just down the street (behind Genessee Royale).

For those who scored big and early with Taps and Tastes tickets, Danner here offers his list of what to line up for this year:

Drop Top Caddy from Central Standard Brewing This beer is a tart take on the classic orange crème soda and it’s spot on. The tartness keeps it from being cloying and makes it super drinkable.

Tropicalia from Creature Comforts Our partners for Collaboration No. 7 (along with Arizona Wilderness) make beautifully balanced beers. Tropicalia features juicy/citrus hop notes with just enough malt sweetness to balance everything out.

Apricot Provincial from FunkwerksI LOVE apricots in beer and I’m excited to see how Funkwerks, masters of Belgian-style beers, incorporate them into a low ABV, tart beer with fruity Belgian esters.

The One They Call Zoe from Hops & Grain Brewing I’m a sucker for “regular beer flavored beers” and Zoe, a subtly dry-hopped German lager, is going to be crazy refreshing while hanging out in the sun this Saturday.

Fruitesse from Liefmans I know this is a bit of a homer call here, but Fruitesse is usually one of the first beers to blow when we pour it at a festival. At 3.8 ABV, it’s beautiful vehicle for strawberries, raspberries, black cherries, elderberries and blueberries. Don’t miss this one at the Duvel family tent!

Saison Brett from Boulevard We’re pouring three years of Saison Brett during Taps & Tastes this year. I always tell folks that Saison Brett is the best beer we brew and then follow that up with, “This is a fact, not my opinion.” It’s always interesting (and delicious) to see how Saison Brett evolves over time.

Taps & Tastes ticket holders should note that they’ll have access to 17 breweries that don’t regularly distribute beer to the Greater Kansas City Area.

Regretting your decision not to buy T&T tickets? Some are going for just above face value on Craigslist.

Among the food purveyors catering to non–Taps & Tastes civilians is a host of food trucks and tents. Slap’s BBQ is bringing its wares to Boulevardia, a good opportunity for those who don’t lunch in KCK very often. Among other food trucks and stands worth visiting are Betty Rae’s Ice Cream, Scimeca’s Italian Sausage, Hi-Chi (Chinese food), Street Wings, Taste of Brazil and Jerusalem Café.

My curiosity will bring me by the Spam tiny house (yes, the Spam). Head into a tin-sized space for dishes made with the world’s premier tinned meat: fries, sliders and musubi included.

West Bottoms Kitchen will also be open, serving its Southern-inspired fare and cocktails. Rock Star Burgers and Genessee Royale will also be open for business. (Voltaire will be closed except for the ticketed specialty dinners.)

This year’s lineup includes headliners Local Natives, George Clinton and Parliament Funkadelic, the Strumbellas, Guster and the Joy Formidable. Many are surely familiar with the headliners, George Clinton being a living funk legend, and Local Natives having been through these parts twice in the past few years. A little further down the list, though, and nudging into the local category, are a few don’t miss acts: 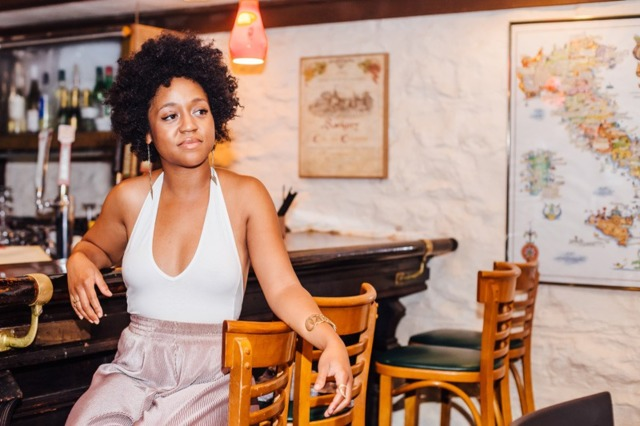 This band is fronted by the soulful, beautiful Julia Haile, and has it all: funk, soul and rock. The act recently opened for Lee Fields and the Expressions at RecordBar. Hi-Lux performs Saturday night on the homegrown stage.

If you like a little British glam with big hooks, visit the Struts on Saturday evening on the main stage. The band has opened for none less than the Rolling Stones, and certainly embody the fun, restless spirit of Jagger. Catch them Saturday on the main stage.

Rachel Mallin and the Wild Type

This band sounds breezy but is whip-smart, a combination that ought to work well on a hot, happy-hour-ish Friday afternoon.

But then there are also the Phantastics, Katy Guillen and the Girls, the Grisly Hand, Jaenki, Not a Planet, Calvin Arsenia, Cadillac Flambe and many, many more. You will not want for good music either day.

Many of our favorite local shops and purveyors are well represented here: Sex and Ice Cream (clothing and home goods), Beer Paws (selling dog treats made with spent grains from beer brewing), Urban Provisions, Boozy Botanicals (shrubs and drink mixers) and way more than we can list here.

And that’s not all

See the festival’s website or download the app for guides, maps, beer tasting lists, information in cycling integration and cycling-specific events, and more.