What the Black Lives Matter protests hope to accomplish, explained 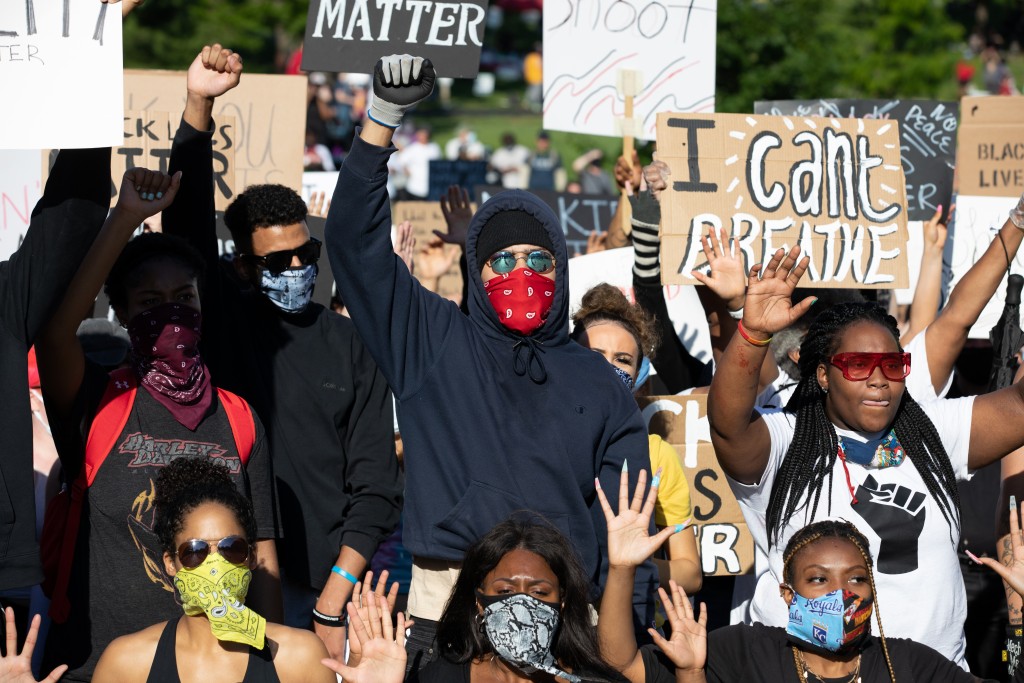 Protestors on the Plaza. // Photo by Scott Rohr

Protests have now occurred in every state in this country and even in countries across the world. While some people will choose to focus on the “unnecessary” violence that a select few protestors are partaking in, there are legitimate desires and outcomes that protestors hope to achieve by peacefully protesting across the country. As tough as it sounds and as hard as it is to read, it’s more than bringing attention to the recent murders of George Floyd and Breonna Taylor by police. On a local level, it’s more than doing the same for Terrance Bridges, Cameron Lamb, Donnie Sanders, and Ryan Stokes. It’s about bringing change to a system that’s been unfair to Black people for over 400 years.

The change starts with holding those in control and those with unlimited power accountable for their actions. Patrisse Cullors, co-founder of the Black Lives Matter movement, told “Nightline” that at the core of what protesters across the country are demanding is accountability. They want the officers involved in any murders to be prosecuted to the fullest extent.

“They want to have no more terror, no more police terror in their communities,” Cullors said in the interview that aired on ABC on Monday. “Everybody wants to be apologized to. Everybody wants to be told, ‘I’m sorry. What I did was wrong. It was unacceptable. We won’t do it again and, in fact, this is how we change.’”

It’s been an uphill battle for protestors looking to bring forth this change and the mountain just keeps getting bigger. Protests around the country have been met with more brutality and more violence from the boys in blue each passing day with no signs of slowing down. Kansas City is no different, as the protests over the weekend and on Monday and Tuesday involved police in riot gear, tear gas tossed into trapped crowds, pepper spray and mace being sprayed at anyone who stepped a centimeter over the sidewalk and into the street, arrests, detainment and small amounts of looting from those only wanting to make things worse for the movement.

The protestors in the city of fountains share similar sentiments to the Black Lives Matter movement. They want police brutality to come to an end. Their voices are finally being heard after centuries of yelling. The Pitch wouldn’t be able to speak for the community, so we reached out to local protestors and activists who are much more capable of telling people what they want to accomplish by protesting and educating the uneducated.

Oluwatoyin Akinmoladun organized the protest that took place at the Plaza on Saturday and was arrested by the Kansas City Police Department for doing something dangerous: standing in the street. These incidents with the police are just the tip of the iceberg as to why she and millions of others are protesting for change.

“I want the KCPD to be held accountable for their actions on innocent people. They’ve sprayed, they’ve detained, they’ve arrested simply for exercising our First Amendment rights,” Akinmoladun said. “More importantly, there are KCPD officers who have killed Black men and I hope the police officers are fired because they still went back to work.”

Others, such as D’Artagnan Harris, brought up how he’d like to see police change how they interact with the public. He mentioned how police will pull out their guns immediately when a situation starts to escalate instead of looking for alternative options to calm the situation down. He, like many others, hopes police receive more training in interacting with the public and only certain units have access to guns, since a 250-pound man doesn’t need a firearm to help a kid whose bike was stolen.

The website 8cantwait.org, a project by Campaign Zero, lists eight policies that are proven to decrease police violence by 72%. One of the policies is centered around de-escalation, stating that cities should “require officers to de-escalate situations, where possible, by communicating with subjects, maintaining distance, and otherwise eliminating the need to use force.”

As of this moment, Kansas City has enacted none of the policies the website lists.

One would think that police would change their ways after citizens continue to post videos of the riot squad taking things too far, but that is not the case. Even after they kneel in solidarity with protestors,  they go back to their violent roots moments after benefiting those with flash or any kind of photography with the photo that makes the police look good.

As Jorden Durkee pointed out after attending Saturday and Sunday’s protests, it was peaceful until the police got involved. One of the many characteristics that are involved in her perfect world includes action being taken against police who overstep their boundaries and go into business for themselves.

According to Mapping Police Violence, 99% of killings by police from 2013-2019 resulted in no officers being charged with crimes. In that timeframe, 28 people were killed by KCPD. The website also states that there were only 27 days in 2019 in which police didn’t kill anyone.

“I have brothers and anything could happen to them. I do not want to see them be another name on the list of Black men and women who were killed by the police for no reason,” Durkee said. “I don’t want to ever see them be murdered and then have the story because I feel like that happens so often.”

It feels like it happens so often because it does happen so often and that’s due to qualified immunity. The Appeal defines it as “An officer who knowingly violates someone’s constitutional rights will generally be protected from suit unless the victim can identify previous judicial opinions that addressed the specific context and conduct.” As long as qualified immunity exists, police are untouchable.

Roman Leapheart, who started a petition to remove Thomas Jefferson’s statue from Mizzou’s campus, said that bringing attention to police brutality is important since people are losing their lives every day because of the oppressive system and for so long they’ve been told that’s just the way life is.

The people you see protesting and putting their lives in danger are the same people who grew up seeing George Zimmerman murder Trayvon Martin in 2012 and walk away without any consequences. These are the same people who grew up seeing Eric Garner cry out “I can’t breathe” as he was choked to death by a New York Police Department officer in 2014. They were kids when they found out “that’s just the way life is.” They grew up with police brutality seared into their brains as young children.

Now they’re using their voices to change the normal and it starts with holding police accountable for what they’ve done to innocent Black lives everywhere in the country.