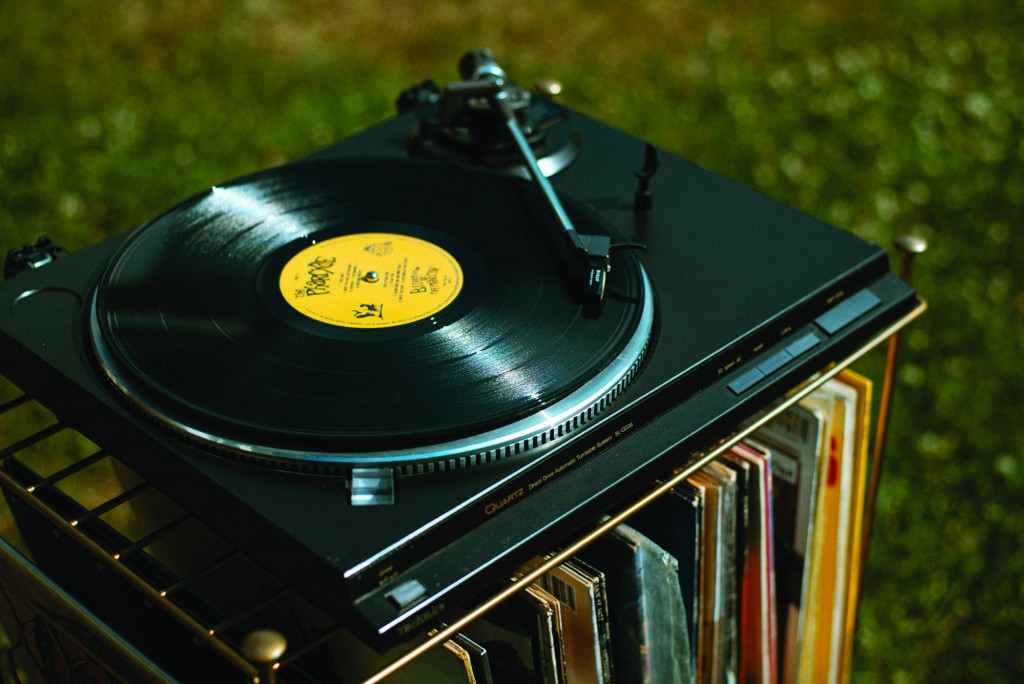 Rocking vinyl in the front yard. // Photo by Travis Young.

Summer jams are one hell of a way to lock a moment in amber. I can’t hear Los Lobos’ version of “La Bamba” without smelling sunscreen, chlorine, and the hint of a nearby snack bar’s hamburgers or hearing my aunt tell my brother and I to stop running next to the pool at the old Piper Lake Club. Alan Jackson’s “Chatahootchee” will always slam-bang into “Achy Breaky Heart,” and hearing those two songs insantly transports me to the drive home from camp while my mom and grandma laughed and told stories in the front seat of our van while Alan and Billy Ray played on repeat.

So many songs evoke sweaty memories of the past, while also letting us make new ones in the present. We contacted a slew of people we feel are interesting voices in the Kansas City and Lawrence communities to talk about a song which they felt encapsulates the summer—either as a season, or one which seems particularly significant to this point in time.

During the pandemic, music has been my constant companion—more so than usual because I have been working from home and am not experiencing my typical interactions with co-workers, faculty, students, and co-workers. I lately have been gravitating toward fixtures from my salad days, such as the Big Band era, Linda Ronstadt, Buffy St. Marie, and War. But it’s Pink Floyd that has been on replay. During the early days of the pandemic, I had separate dreams where Roger Waters and David Gilmour each visited with messages of support, so this prompted me to revisit Floyd’s catalog. I’ve connected to “Fearless” this summer, as it is such a song of comfort. The music and vocals are tranquil, while the lyrics tell of a protagonist who stands by their convictions against ignorance. It ends on a hopeful note of personal empowerment. This particular theme repeatedly and assertively appears in Floyd’s later work, but this early recording captures a tone of tentative confidence that matches my current mode regarding getting through this pandemic.

I had the honor to be asked to tour manage for the Appleseed Cast / Hospital Ships tour by Chris Crisci and Jordan Gieger in late summer of 2011. It was by far the most fun I’ve had both as a fan and as a friend of all the members of both bands. “Middle States” was unanimously the highlight of every night no matter what song even the die hard fans thought they’d rather hear. In addition to what arguably was the tightest lineup of both bands, Appleseed also had Ted Steven’s of Cursive on this tour in place of Aaron Pilar who had just left the band to pursue owning and operating his own restaurant (Culinaria which is amazing). Minds were blown. Ted even shoved a guitar in my hands to jam with Appleseed near the end of a show in St. Louis. I could have died then. Anyway, I got to visit a lot of places I’d never been before and got to experience it with my friends playing amazing music for two and a half weeks. Every time I hear this song now, I’m back in the small car Jordan drove or the van Appleseed borrowed from Capybara for this tour, soaking in the sites and the music. I’ll never forget it.

The sound of summer’s end resounds in “Summer Skin.” Punctuated by a marching rhythm on snare, a hollowed-out feeling grabs you from the first note of bass. The lyrics transport us instantly to the halcyon days of youth. We would play under the sun until we were dehydrated and sick. We felt our stomachs churn as we realized that the summer wasn’t the only fading thing. Our youth was gently disappearing; the pain of that transition only to reappear in middle age. The story unfolds: I’m fifteen. I’m living out my big summer crush. We kiss under the stars. I’m three hundred miles away from home. We hold each other close. We’re unsure what to do, so we kiss all night. I worry that I’ll lose the memory, but I’ve been given a ticket to my last days of innocence: An unassuming song that hides a cyclone of emotions.

Cat Stevens, “Wild World” from Tea For The Tillerman

“Now that I’ve lost everything to you…”

In my Los Angeles, the car was king. For no real reason, we would hop in the car and drive. As the summer wound down, trips to nowhere continued. Most of the rides were in a champagne Cadillac Sedan Deville. That monster rhythmically glided over the paved roads, every bump, pothole, cushioned. Tonight, toward sunset, we would hit the freeway and head to the beach, stopping at McDonald’s along the way. This ride was not the first time I had heard Cat Stevens’s “Wild World,” but it seemed like the first time the hooks and lyrics penetrated my heart. The gentle, soothing, yet dire warnings of the bad things out there from Stevens, combined with the narcotic of fast food and the magic carpet ride, I could not help but fall asleep in the back seat, and those in the front were free to do exactly what they wanted. I couldn’t tattle on what I didn’t see or hear.

“Sounds Like Fun” is just a little over two minutes long, but it immediately changes how I feel about my life in the middle of this landlocked, isolating, depressing COVID-19 pandemic. When I learned this band was from Raytown, Missouri and formed in 2019 by three young friends, Tyfaizon, TheBabeGabe, and Deiondre, I was floored. They are young, but they have such a great, layered sound that moves the listener to many places. It is pure goodness. I just want to jump off the high diving board at the pool when I hear their music, but alas, the pool is closed. The band members all went to the same high school and have been friends for several years. They have released multiple albums on their own label, Bedroom Records.

“Sounds Like Fun” is the opening track of an 11-song album that is beautiful and musical and honest, and from the next generation of musical artists. The band members are sharing stories about their lives with bold primary colors of sound, and they’re not taking themselves too seriously. The band has said that they are writing music that is the soundtrack of their lives. With Surf as an album title, and metaphor, I want to escape to their world for the summer. Give me the waves, wash me away!

Jade Green, singer and songwriter for The Black Creatures

The Internet, “Come Together” from Hive Mind

This song, like anything frontwoman Syd conjures up, is funky and relevant on levels. Immediately, this song feels like a cool, jazzy breeze on a summer night, wind through a hammock, that sort of thing. Reading really deeply into it, I’ve repurposed the affirmation “They gon’ get us to come together,” to mean “it is dire and imperative that we work in a coordinated way to solve some many deeply connected social issues,” the way the affirmation is repeated feels like a building of urgency, each phrase before crushed by the renewed meaning and added weight of the following. “What we gon’ do? What we gon’ do?” melodic vocals ask from the foreground, while jazz flute accentuates the short and simple questions and affirmations. This song feels like it’s telling me to prioritize self-care so I can better build up the communities I am part of, which wouldn’t be all that bad of a message to spread around right now. Don’t forget if you’re gon’ come together, wear a mask!

The track gives me an electric feeling like taking in a summer skyline at dusk overlooking Clinton lake while I’m whipping my ride and pumping it up to “11… one more!” The sultry vocals by Gambino just take you to another place, maybe enough to make you set aside the craziness of the state of the world currently. The single’s whole vibe is cool and sexy, and I can’t listen to it enough right now. I can mix in and out of this one and never disappoint the crowd or more importantly, myself. Definitely a scorching summer sizzler! The proof is in the pudding. On a side note, this one is listed as a single, I’m sure it’s on an album but in this ADD generation the kids are on singles and we disc jocks have always strived to get the 12” single…

River of Orchids is my summer song of 2020, because it reminds me to drop the technology, slow down, and live presently in the world. It’s the first track on an album that I have fond memories of listening to incessantly the summer of 1999. This year, I have often thought of and listened to this song again because of the circumstances that the Corona pandemic has put me in. Other than running back and forth to work, day care, and home with little time to do much rather than eat, sleep, work, and clean, this summer has forced to me slow down.

I have spent many many days recently just staying home and taking care of my four year old daughter. Laurel and I developed over time a favorite activity of going for miles-long walks together. Our objective was always to find “treasure.” Treasure could be anything, really: the pattern on a leaf, a special rock, an interesting cloud, a dropped object, a unique wildflower, or a stick that is also a magic wand all qualified. I now treasure the experience of slowing down and discovering the world around me through the eyes of my best friend and daughter, Laurel Rose.

I’m a huge Janelle Monae fan (I have “Cold War” lyrics tattooed all over me) and “Hell You Talmbout” encapsulates the summer for me. This is what we need to be talking about. It’s time for radical change. The systems in place have failed all but the most wealthy among us. There’s no more room (there never was) to be complicit in the murder of black civilians at the hands of the police. We need to remove outdated systems that are holding our country back and move forward into a better system that works for all of us. This is the summer. Say their names.