What does the closing of the Thriftway on Main Street mean for midtown? 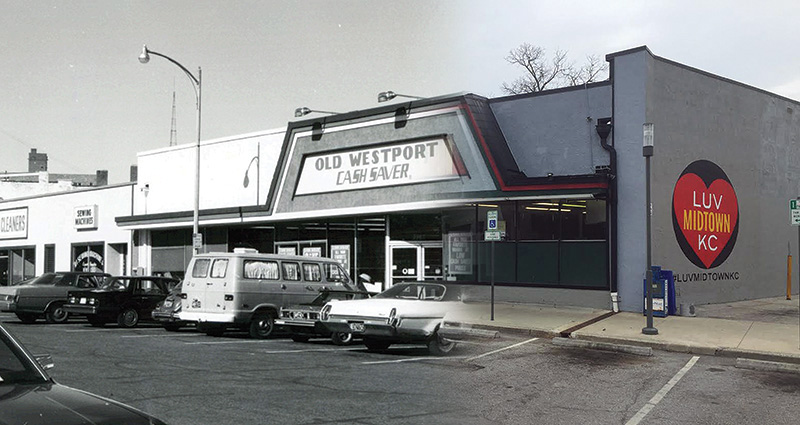 Talk to old-timers around midtown — I’ve put in my time — and you’ll notice that some of them never got around to calling the grocery store at 3967 Main by its most recent name. Seniors in the neighborhood still refer to this Thriftway, the sign for which went up about 30 years ago, by the names of its ancestors: “the old Muehlebach,” “the old Milgram’s.”

Well, time is a flat circle, or something, and last month, that Reagan-era Thriftway sign was stripped off the building and hauled to the grocery graveyard. It gave way to an even more ancient sign that apparently had lived all these years beneath the Thriftway sign. It’s wooden and warped and, in green and black paint, it reads: Old Westport Cash Saver.

This rotten old sign, reunited with the sun and the air after decades, is a wondrous sight for those of us given to romanticizing the past. But so was the Thriftway, a modest, no-frills neighborhood grocer in an era of hulking mega-stores and chichi boutiques. It closed, quietly, in the middle of January. Places like it are so rare anymore — there are two Thriftways left in the Kansas City metro, down from more than 25 in the 1980s — that walking the aisles had come to feel like visiting a grocery-store museum that also happened to sell reasonably priced meat and toilet paper.

Tony Hassanzadeh, the Iranian immigrant who bought the Thriftway in 1990, says he’d been looking to get out of the business since his wife died, a year and a half ago. He had lined up a buyer who would continue to operate it as a Thriftway, but when he went to his landlord, Marilyn Lerner, he was told that there would be a significant rent increase for the new tenant — a $10,000-a-month hike.

“I had been paying $3,500 a month in rent, so I figured the rent [for the potential buyer] would be comparable,” Hassanzadeh says. “But then she got a real-estate broker who told her she could charge much more for the space. They said they wanted $14,000 a month for it. Anybody who knows the grocery business knows that a grocer can’t make that work in a space like that. So the deal fell through. I knew I wasn’t going to be able to find a buyer who could pay that rent, so I decided to close the store.”

“I wasn’t shooting up the rent for Tony — I wanted him to stay,” she says. “The issue with the sale was that the buyer he brought in didn’t have any references I could check. I’m not going to lease to somebody who I don’t know if they have any financial backing. I needed a guarantee that whoever took over the lease would have a viable future here.”

The space, which is a little less than 10,000 square feet, is now being advertised to potential tenants with an asking price of $11,000 a month. The marketing literature notes that the location is along the proposed route for the streetcar extension. Greg Patterson, the real-estate broker for the property, says Lerner “had below-market rent with a long-term tenant, and we brought that up to what we thought the market could bear.”

Diane Burnett, executive director of Maincor, the Main Street community development organization, says it is Maincor’s “strong preference” that the Thriftway be replaced by another grocer. “I think everybody understands the need for a grocery store in that area,” Burnett says.

Lerner says that’s also her goal. Patterson says he has four potential tenants interested at the moment. “One is oriented to meat and produce, one is sort of a nutritious-food type of thing, one is an Italian-food concept, and the fourth isn’t food — it’s a retail operation with three other stores in the metro,” he says.

The space has an existing packaged-liquor license, which makes it attractive to liquor store proprietors, but Patterson says Lerner is not considering a liquor store as a tenant. “It also can’t be a restaurant, because that would require a change in the license,” Patterson adds.

The economics of operating in a space that size, with a lease that pricy, make it unlikely that whatever replaces the Thriftway will serve the needs of people in the neighborhood like J.T. Spotts, a 77-year-old man who lives on the 4100 block of Warwick. For the past 40 years, Spotts, who doesn’t own a car, has walked to the Thriftway (“I remember when it used to be a Milgram’s”) for cheap food and other essentials. Lately, he’s been asking friends to drive him to Marsh’s Sun Fresh, a mile away.

Down the block, Vicki Vance, a 63-year-old woman on disability, also relies on friends to drive her to Sun Fresh, or to the Price Chopper in Brookside.

“I would walk up to the Thriftway every other day or so for meat or dairy or sometimes produce — it was good for everyday things,” Vance says. “I can still walk to Nature’s Own [a health-food store at 43rd Street and Main], but most of the stuff there is too expensive — the milk costs twice as much as anywhere else. So I end up paying friends, or other people on disability who own a car and need some extra money, to drive me to one of the bigger grocery stores. I bet I’ve spent $60 on rides since the Thriftway closed.”

The Thriftway was also convenient for bus riders, located as it was on Main Street’s MAX line. “We had a lot of customers who would get off the bus and come in on their walk home, or who would shop and then get on the bus to go somewhere else,” Hassanzadeh says.

It’s faster to walk the mile or so from most parts of the Southmoreland neighborhood to Sun Fresh than to attempt a bus ride, though. Residents on the southern end of Southmoreland used to have an Apple Market within walking distance, near the intersection of Forest Avenue and Emanuel Cleaver II Boulevard. But that store  also closed in January.

Over the past month, a construction crew has been steadily gutting the Thriftway building — tearing out coolers and interior walls, fixing some drainage issues, and generally getting it in shape for the next tenant. Hassanzadeh says he hopes that whoever signs the lease will preserve the address’s grocery store legacy, which dates back continuously to the 1940s. But he’s not optimistic.

“The grocery market has changed so much, and the profit margins have gotten so small, that a smaller neighborhood place like ours can’t compete on prices with a 50,000-square-foot grocery store,” Hassanzadeh says. “You have to do so much business just to pay the bills, and the numbers don’t work on a smaller scale like the Thriftway.