What can a double-decker bus tour tell us about Kansas City? 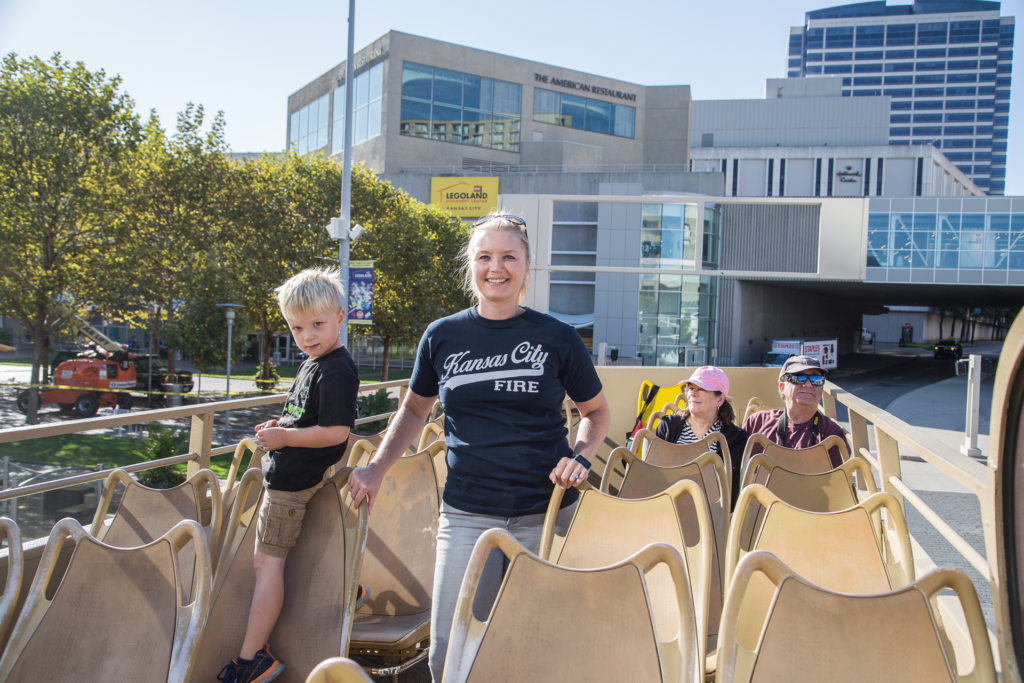 “A word you’ll hear me say a lot today is condos,” said my tour guide, Troy, as we sailed past the Western Auto building on Grand, atop a double-decker bus.

What a coincidence: I had been talking about condos just hours before. Or maybe I am just always talking about condos these days. Luxury housing is sprouting up everywhere in this city. It bothers me. Maybe, as some smart people tell me, this influx of new housing will satisfy the market, make apartments less scarce, help stabilize rising rent prices across the city. Maybe. But when I stare at these boxy buildings and envision the 550-square-foot rooms inside them, renting for $1,700 a month, all I can think is that the best thing about Kansas City — that it’s cheap to live here — is slipping away before my eyes.

I got a short Americano in the Crossroads the other day and it was three dollars and some amount of cents. Do you know what that means? That means my coffee cost $5. I give the barista a dollar, and who knows what happens to that loose change. It’s never in the car when I need money to park. Five dollars!

Call me Andy Rooney, but you know it’s true. I was hardly alone at the brewery the other night, where the cheapest beer was $8 and it came in a 10-ounce glass. Were some of you also wondering when you started getting less beer for more money? Do you really like this Whole Foods–ification of your city?

The fact that there are condos under construction everywhere is not unrelated to the fact that people are now apparently willing to pay $33 to ride around Kansas City on a bus and listen to a man such as Troy talk about buildings and local history. Not only do people want to live here now — they also want to visit here. Take it from Bethanie Schemel, co-owner (along with her husband, Karl) of Kansas City Double Decker Tours.

“We started out in 2012 doing these barbecue tours,” Schemel says. “We’d take a passenger bus to Bryant’s, Gates, LC’s, Danny Edwards, all that. And in between stops — what we call ‘digestion time’ — we noticed that people seemed really interested in the Plaza, UMKC, the Nelson-Atkins, Westport, the World War I museum. So we decided to expand and start offering guided sightseeing tours.”

The Schemels bought a double-decker bus from a Chicago tour company whose owner was retiring. (The vehicle had seen action in New York and, before that, in London.) Today, KC Double Decker Tours owns two such buses and two trolleys. In addition to the barbecue tours, the company also runs at least four sightseeing tours, six days a week. And it’s not the only tour-bus company in town — there’s also Kansas City Fun Tours. But for now, it’s the only one that offers hop-on, hop-off service across its eight stops: Crown Center, Power & Light, the River Market, Boulevard Brewing Company, the National World War I Museum and Memorial, Westport, the Plaza, and the Nelson-Atkins Museum of Art.

“I think locals and people who grew up here are surprised when they see the bus going around the Plaza and downtown or wherever,” Bethanie Schemel says. “But people from out of town, I think they expect to be able to do a tour. I’ve been in KC for 11 years, and my husband for 13 years. We’ve watched it grow into this destination type of place. So we’re not that surprised there’s demand for it.”

Demand was not great the day I rode the bus. My dude Troy didn’t need his microphone for the first leg of the route; I was the only person taking in the sights. (This was not entirely unexpected: It was a cloudy October Thursday. Later in the week, I’d see the bus, mostly full, cruising Main Street.)

Troy used to lead tours at Walt Disney World and in the Florida Keys, but he has KC roots and moved back here recently. He works part time as a stage manager for theater productions, does a bit of acting, and lately spends a couple of days a week standing atop a double-decker bus talking about Kansas City. He’s in his late 40s, actor-fit, and favors sunglasses and a white-and-black fitted KC cap. I could see a tattoo peeking out from under his polo shirt. 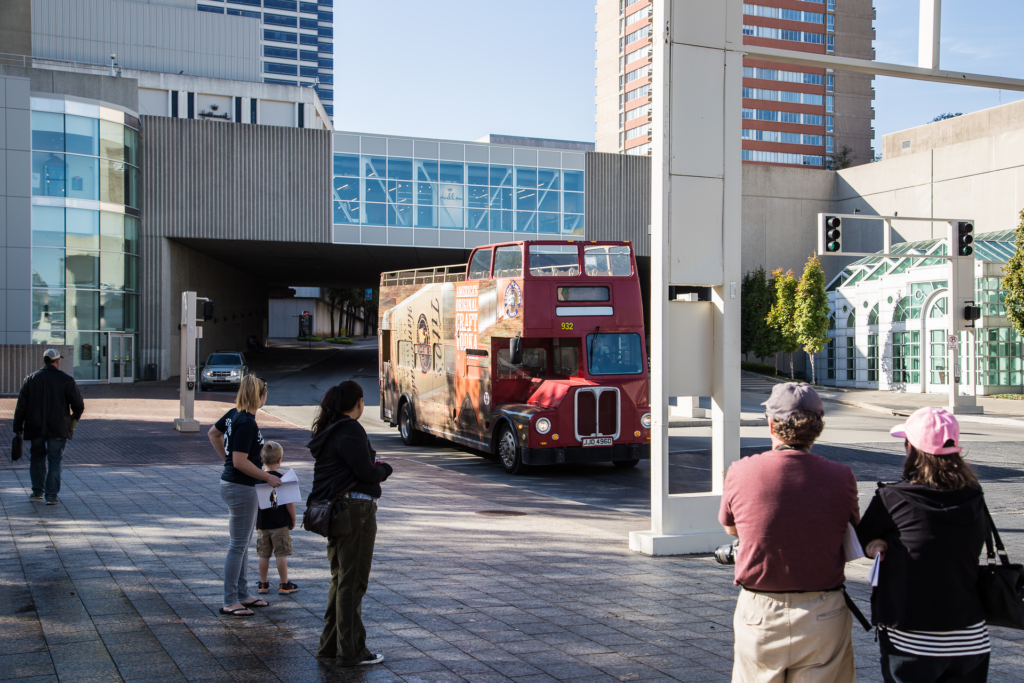 At Power & Light, six middle-aged women boarded the bus, and Troy retreated to the back, plugged in the microphone, and commenced the full treatment.

“Where are you all from?” I asked the ladies.

“Wisconsin,” one of them told me.

“Oh? Where in Wisconsin?”

“Near Milwaukee,” another said, avoiding eye contact. “Hey, Karen, you still got my Chapstick?”

They seemed reluctant to engage the man in his 30s sitting alone at the front of the tour bus. In the silence, I considered the possibility that these unfriendly Wisconsinites were among the 53 percent of white women who tipped the election for Trump.

I wondered this again when the bus stopped at the Nelson and Troy pointed out the headless statues by Magdalena Abakanowicz on the museum’s lawn. Troy identified Abakanowicz as a Polish sculptor and said the headless bodies she’d created were open to interpretation. (For his part, he added, they spoke to a lack of individualism in modern life.)

“Sounds like she’s got issues,” one of the Wisconsin ladies said of Abakanowicz.

“Daddy issues,” another of them said.

Together, they laughed a dumb, nasty laugh of a kind Abakanowicz surely had in mind when she cast her bronze. It’s here that I’ll submit my longstanding belief that Midwesterners are not nearly as nice as our reputation suggests.

As Troy said at the outset, condos were indeed an inescapable component of the tour. So much of our history is now just housing. The old federal courthouse on Grand is now the Courthouse Lofts. Many buildings in the Garment District — which Troy told us was once second only to New York in terms of clothing production — have been converted into lofts. The Western Auto Building (originally built for Coca-Cola): lofts. All these buildings that were once home to businesses that provided fair wages and pensions for workers are now condos for the upper-middle class, or cafés staffed by overeducated employees with crushing student-loan debt, unprotected by unions, with no chance for retirement. That the zombies of late capitalism have invaded Kansas City and are in the process of making this quiet place unlivable for the average person is horrifying. We should be enacting policies aimed at making life easier for ordinary Kansas Citians. Instead, we give massive tax breaks to developers, ignore our failing schools, and build a streetcar for people lucky enough to work or live along the increasingly expensive route along which it travels. And for tourists. Don’t forget the tourists.

Maybe it is starting to sound as though I didn’t enjoy the tour. Guess what? I loved the tour! It felt great to sit up high and roll through the city and listen to someone talk without the responsibility of having to respond. Things I learned:

‌• Harry S. Truman worked at The Kansas City Star? In the mailroom for two weeks, apparently, but I did not know this. Subsequent Googling revealed that Truman once wrote, “If the Star is at all mentioned in history, it will be because the President of the U.S. worked there for a few weeks in 1901.” Trumpian!

‌• During the height of Prohibition, there were 50 jazz clubs on 12th Street alone. Related: The tour did not go to 18th and Vine, which seemed like a significant oversight to me. Schemel later told me that it’s hard to access the area on a tall bus due to a variety of issues with trees and overpasses. Getting there is on her to-do list.

‌• Mobsters bombed the hell out of the River Market — then called the River Quay — back in the 1970s. Only when they all died off or went to prison did it start to become the cutesy place it is today.

‌• Because of all the critters that roamed near the banks of the Missouri River, Rabbit Run and Possum Trot were also in consideration when Kansas City was named. I knew about the latter, but had never heard the former. Some cursory web research has found no hits on Rabbit Run, but Troy said it, and I trust Troy.

‌• As we approached the Country Club Plaza, Troy referred to J.C. Nichols several times as a “visionary.” I was on good behavior, so I did not raise my hand and correct the record to reflect that Nichols’ vision included wildly racist housing covenants that prevented blacks from owning property in the many neighborhoods he developed — a disgusting policy whose aftereffects in some ways continue to define our segregated metro.

At one point, we passed Royal Liquors, on Southwest Boulevard. A bum slouched against the wall out front yelled at the bus: “Hey!” It was more like a warning than a greeting. There was menace in it. I looked back at the ladies. They seemed unnerved. This pleased me. That’s what I’m talking about, I thought. There’s the city I love.