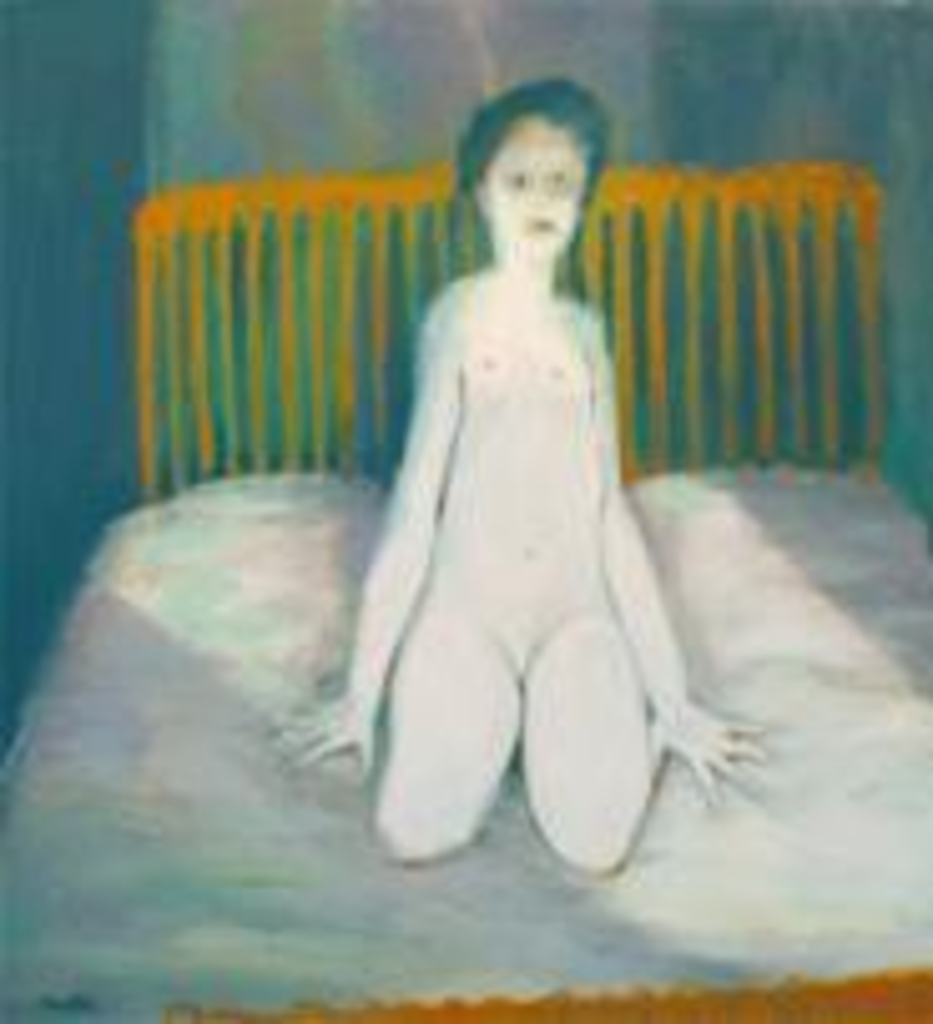 Bob Bartholic couldn’t cut it as a high school art teacher. But his latest show at the Grothaus and Pearl Gallery, Reflections of a Spirit Within, makes a good case for why he shouldn’t have kept his day job anyway.

Bartholic, a native of Wichita, is now retired and lives in a little town north of Tulsa, Oklahoma, with his wife and a couple of horses. He took his first drawing class in Salt Lake City after World War II. After the war (he never fought overseas but instead was sent to gunnery school and trained around the country), he got an art degree from Tulsa University, then a master’s, then the job as a high school art teacher. But he never really enjoyed teaching, he says. In fact, he was fired from his last job.

“I would line the halls with the work of my students,” Bartholic explains, “and, I think, due to the innovative nature of the work, they thought the kids weren’t being taught art properly.”

Or maybe “they” were scared. In “Daddy’s Home,” a naked adolescent girl leans back on a brass bed, her long, thin fingers gripping the bedspread, a look of horror on her face. Her eyes are green dots amid white, circular brush strokes; her mouth is a slash, muted by its simplicity. The painting stands out not only because of its subject matter but also because the girl is totemic, symbolizing every abused child.

It’s also strikingly reminiscent of Edvard Munch’s “Puberty,” an 1895 painting of a girl seated naked and wide-eyed on the edge of a bed, her arms crossed protectively over herself and her legs pressed tightly together. Bartholic says he wasn’t inspired by Munch’s work (though, he says, “I saw that painting recently and was struck by the similarity of the two paintings”). Actually, Bartholic’s work provokes even more unease than Munch’s. What really motivated him was a question, he says. “How in the hell could anyone get to that state of mind, to do something like that [molest a child]? I wanted to express the grotesque.”

Bartholic succeeded, but not all of his work is so provocative. “Seated Woman” shows a tranquil and robust female, sitting half-clothed in what appears to be a private room. Instead of clearly defining the fabric of the robe draped over her shoulders, Bartholic uses a whisper of a pattern to suggest lace; he does the same thing for the upholstery of the chair. In “Siesta,” he paints a voluptuous woman curled into a ball, grinning in satisfaction, her skin pale seemingly illuminated by the blue, brown and green brush strokes that envelope her in midday slumber. She’s like a fat napping cat, and we almost want to crawl into the painting and lie down next her.

Elsewhere, though, Bartholic’s work is forgettable. In the inconsequential “Hunted,” a gestural panther pounces on a smudge that we’ve determined must be some sort of vermin. And “Tree of Life,” a canvas filled with yellow sun shining down on two figures seated closely to each other, feels like a Disney movie about bears being our brothers.

Bartholic has also made sculptures, such as “Incarnation,” a mixed-media ceramic bust dressed in thrift-store finds. Once you’ve seen what he’s capable of, looking at boring work from Bartholic isn’t just disappointing. It’s offensive.