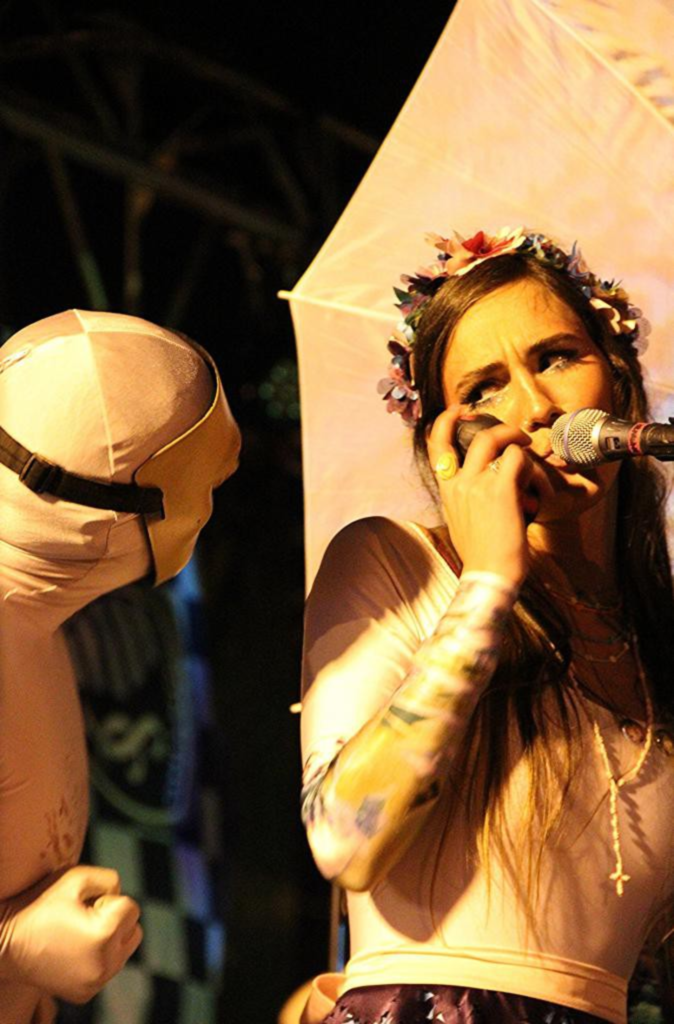 The music-festival game is a rough one; ask anyone involved – major multiday festivals are immensely challenging to plan and to profit from. It involves the types of months-long planning that most sane people steer clear of.  Go too big too soon and you might fail pretty spectacularly (see Kanrocksas). Too small and there’s no money to be made, or no big draws. That in mind, it’s an impressive feat that Middle of the Map is celebrating its fourth year in Westport – and it’s safe to say that the festival can call itself a success, having brought in acts during its tenure including Daniel Johnston, Grizzly Bear, Deerhoof, Tennis, Mission of Burma, and Fun, among many other national touring acts and hundreds of local musicians. This year’s headliners included Of Montreal and the Get Up Kids, among dozens of other acts.

The 2014 incarnation of Middle of the Map also saw some big improvements, including a large outdoor stage set up in the parking lot in front of Buzzard Beach. With the closing of the Beaumont Club last year, the headlining acts of MOTM were shuffled over to the Uptown, largely segmenting the festival. This year’s more successful setup kept people clustered in the heart of Westport between the outdoor stage, Ernie Biggs Dueling Piano Bar, the Riot Room, Westport Saloon and RecordBar. 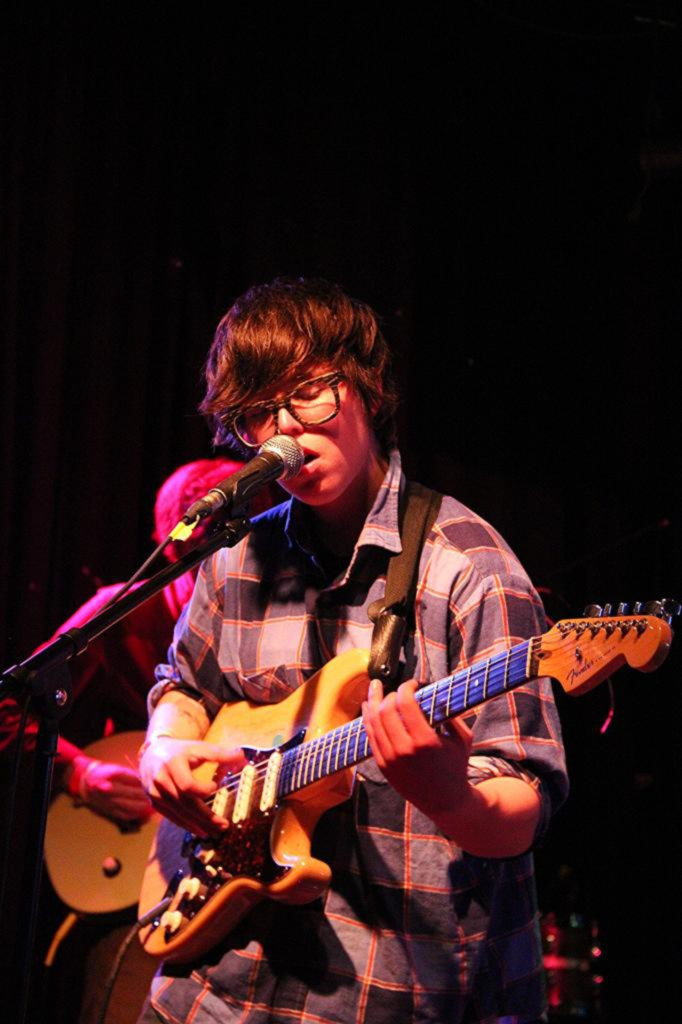 My evening began at RecordBar, to catch Your Friend. Taryn Miller is riding pretty high lately, with her debut album Jeckyll/Hyde to be released on Domino this month, and a ‘Best New Artist’ nod from Spin Magazine for April 2014. You wouldn’t know any of it from watching the modest Miller perform. She has impressive control of her voice – she moves from a quiet note to powerful projection without changing her posture or even really the expression on her face – but she is not a highly emotive performer. Probably because the atmospheric, dreamlike music speaks for itself. Her band also creates a sound more powerful than you might expect. I overheard someone in the audience say, “This is way harder than I thought it’d be,” as Miller and her band built up to the reverb-soaked guitar climax of “Tame One.” 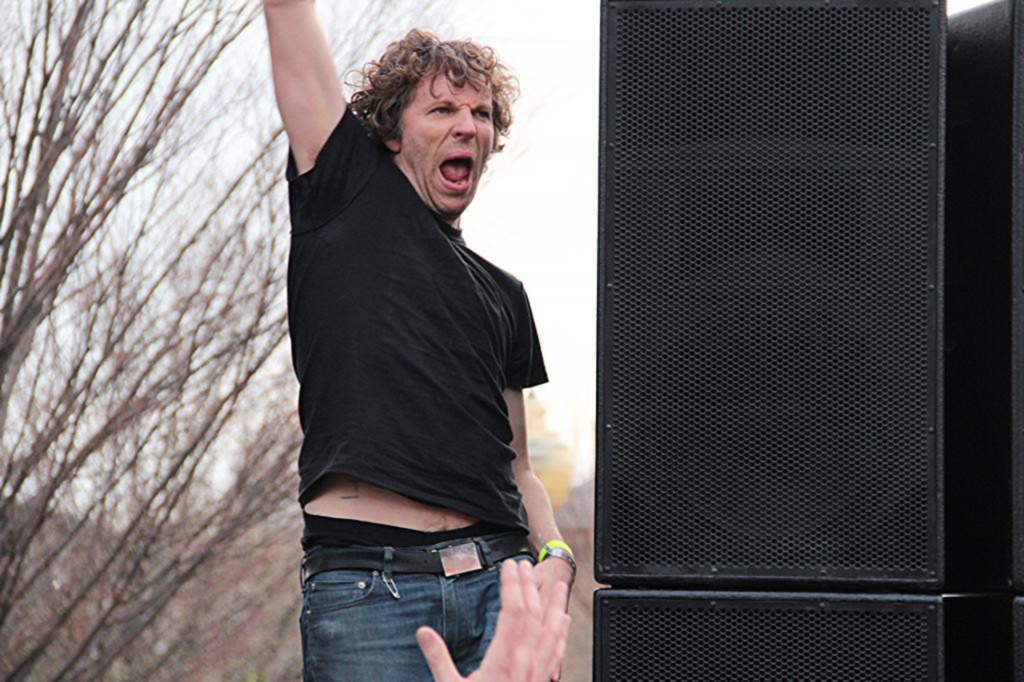 I then took the short walk down Westport Road to the outdoor stage to catch !!! (pronounced “chick chick chick”). Having seen them open for TV on the Radio at Crossroads KC a few years back (and in some respects, outdo TVOTR), I consider !!! a no-miss. They did not disappoint. The band’s funky bass lines and, of course, the over-the-top, frantic ADD energy and dancing of Nic Offer, got the crowd in the parking lot to dance along. He even jumped down into the audience and moved 20 feet deep into the audience, dancing with everyone in his path, grabbing women and (sort of) apologizing to their boyfriends as he moved along. 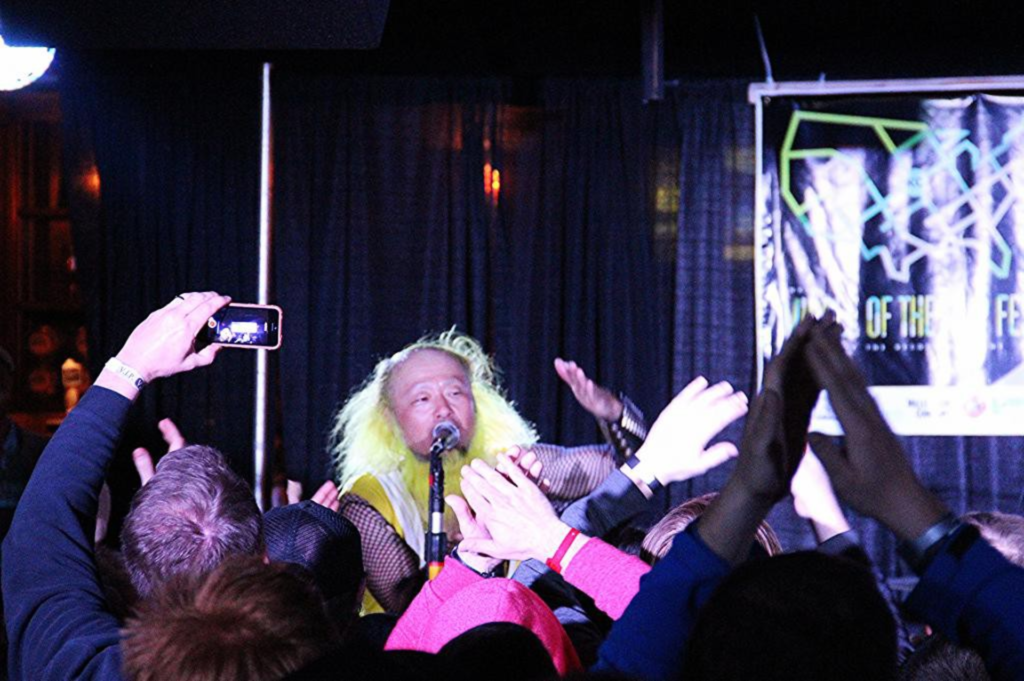 Next door at Ernie Biggs, Peelander Z whipped the audience up with loud guitars, screams, signs, and the ferocious energy that this New York-by-way-of-Japan act has become known for. The band’s routine hasn’t changed much over the last decade – I think the first time I caught them was at the long-defunct Coco Loco in Lawrence – but somehow the antics of Peelander Yellow, Pink, Blue, Purple, and whatever other color, still makes entire crowds smile straight through their sets. And perhaps no one has better hair than Peelander Yellow. 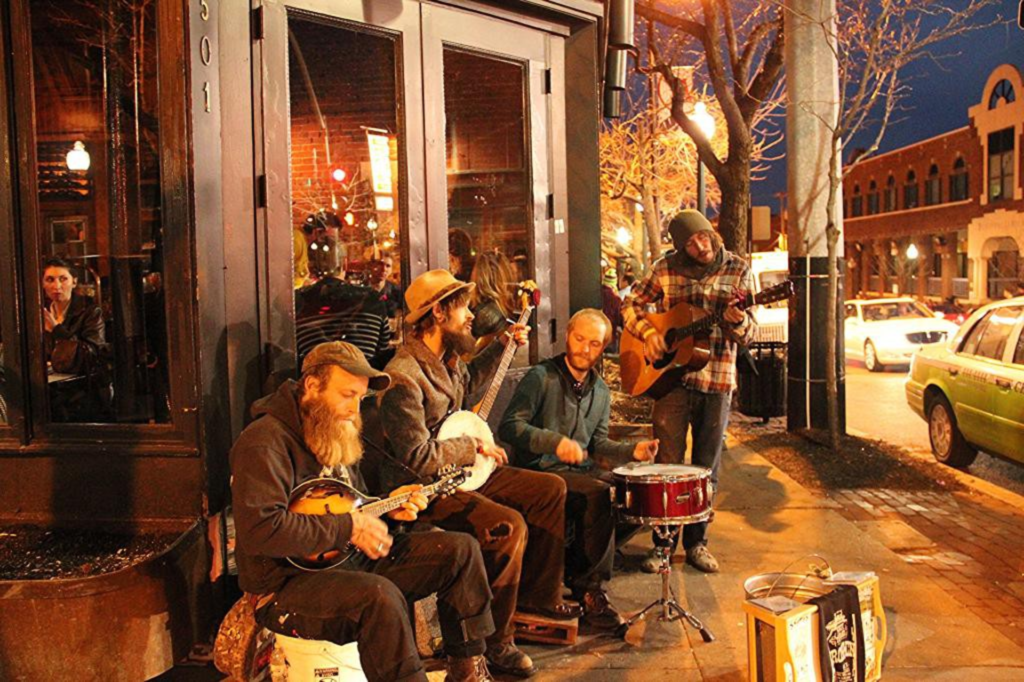 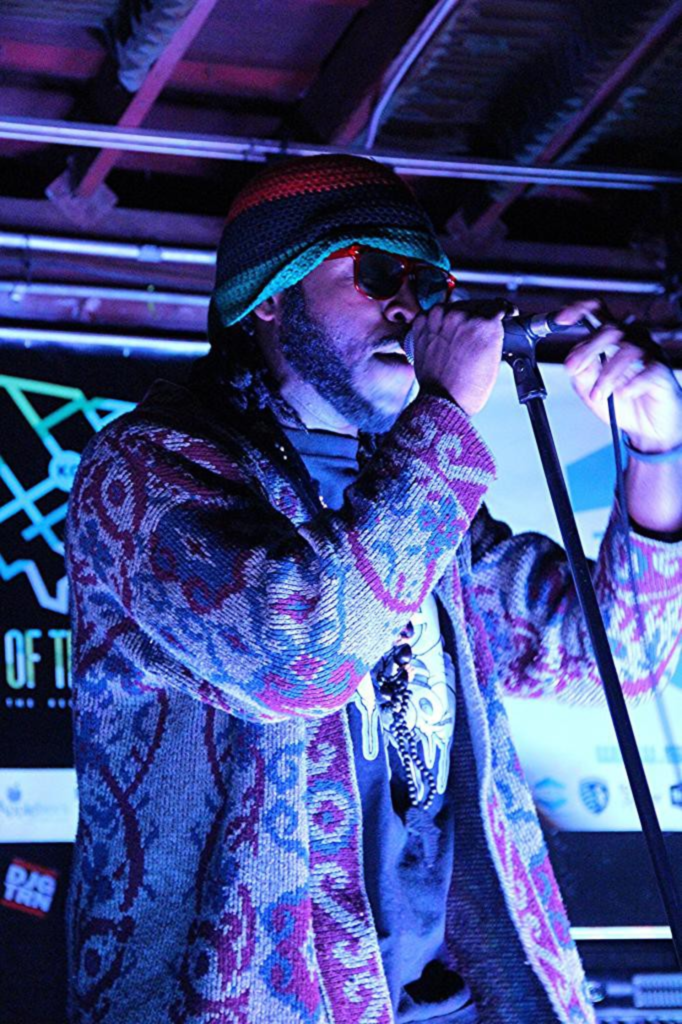 Over at the Riot Room patio, Marty Hillard (of Cowboy Indian Bear and Ebony Tusks) curated an evening of hip-hop acts, which throughout the evening proved to be one of the best stopping points. This was my first opportunity to see Heartfelt Anarchy, and I walked away deeply impressed. Heartfelt Anarchy features rapper Les Izmore (well known for his work with Hearts of Darkness), alongside producer D/Will, wearing a Jason mask, which was particularly effective when the stage was lit only in red. Les Izmore’s sharp tongue and deep, scratchy voice are a nice match for D/Will’s (Denzel Williams’) complex beat constructions, which he creates live and included during Saturday night’s performance a surprisingly great sample of the theme from “Reading Rainbow.” Izmore also often used two mics, one with loads of reverb, which made it sound like there were four of him onstage.
[page] 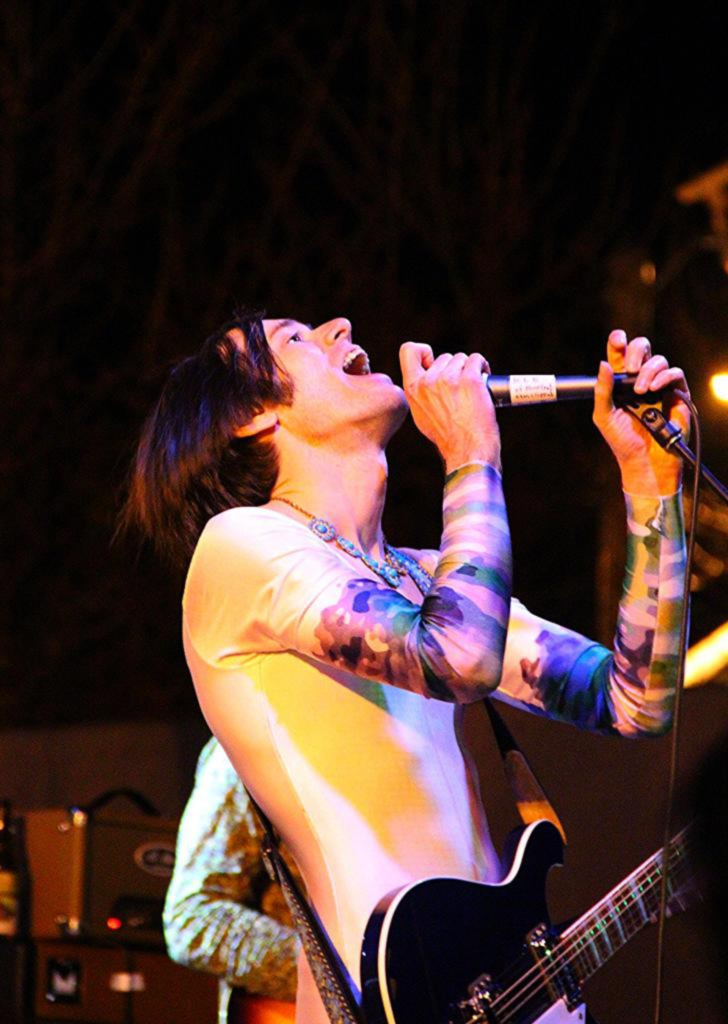 Back at the main stage, Of Montreal received a notable introduction, courtesy of what I can best describe as a large bulge-sporting luchador ringmaster, wearing full face mask and bodysuit, as well as a top hat and coat. He introduced frontman Kevin Barnes, who came to the stage also wearing a full spandex bodysuit, matching the one worn by keyboardist/vocalist Rebecca Cash (who, random note, looks tremendously like Kate Middleton).

The band, which has seen dozens of members and nearly a dozen albums, sticks more or less to its tried-and-true, bass-heavy, funky pop psychedelia, but they absolutely know how to put on a visually stimulating show. Costumed extras made regular appearances onstage, at one point looking like the biths from the Star Wars bar scene, another time wearing crash-test-dummy-esque masks and twirling parasols. Kevin Barnes knows as well how much of a focal point he is, and he brought it under Westport’s streetlights, stripping half down, sexually strutting his thin body back and forth across the stage, to the delight of the deep crowd that was eager to dance. 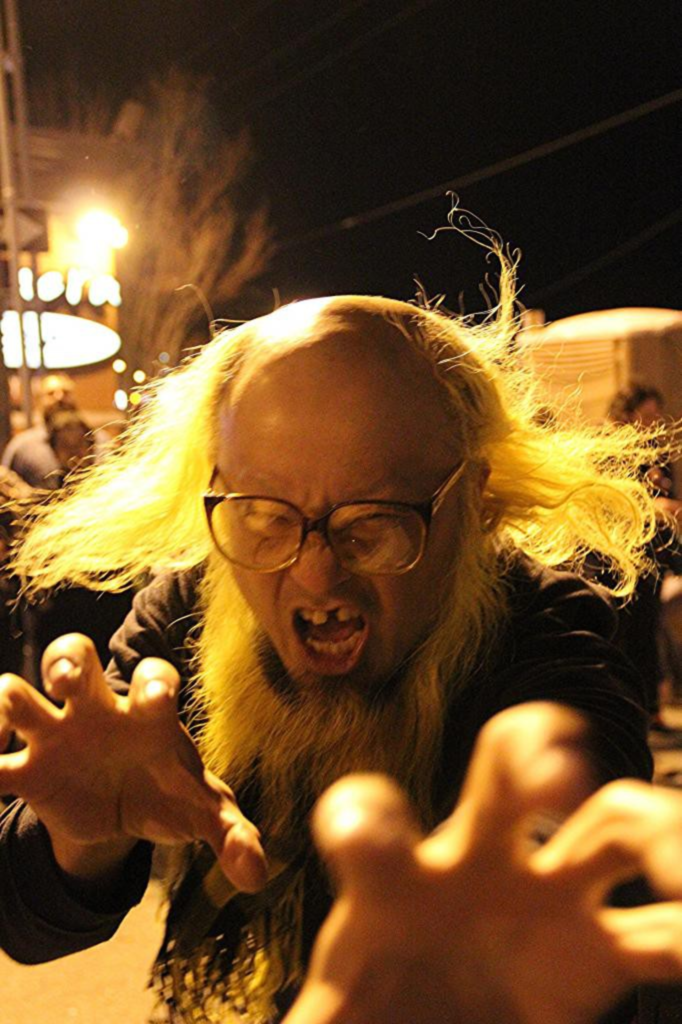 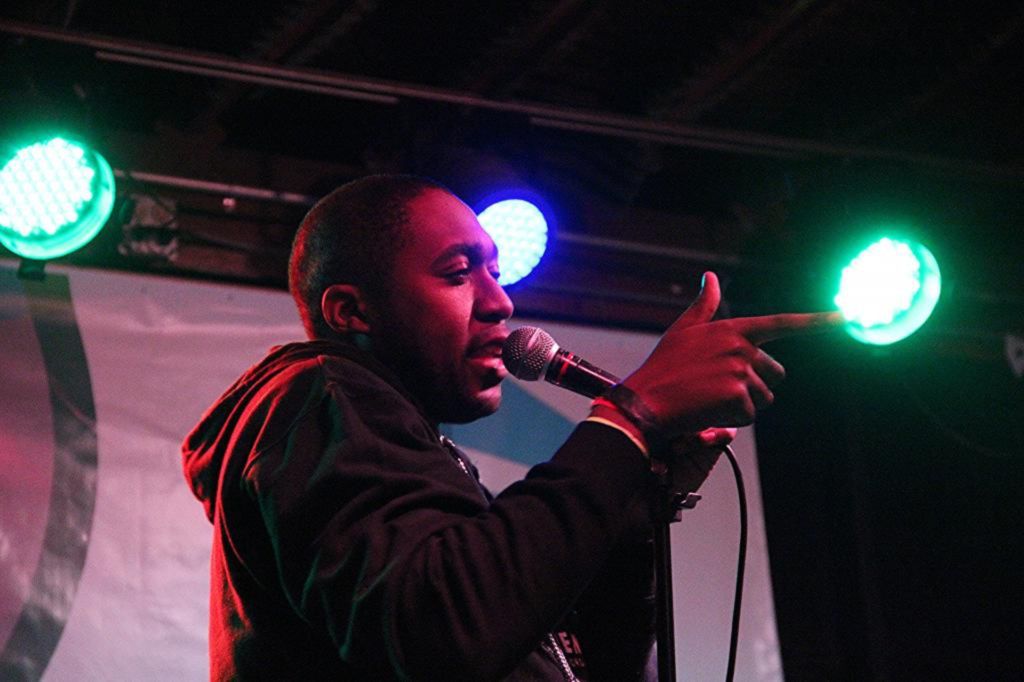 I left shortly before Of Montreal’s set concluded so not to miss Topeka’s Stik Figa, back over at the Riot Room patio. Stik Figa has several years in the local game, but his performances manage to feel fresh every time. His skill level is still growing, too: You can hear in the way that he cuts up his words, almost syncopating them, to work with the beats delivered by his DJ, who rapped behind him through an American flag draped over his microphone (I regret not having caught his name). Stik Figa’s set included a fair amount of new material, but in the spirit of the festival, he closed his set with an old favorite, “Absotively Posilutely.” 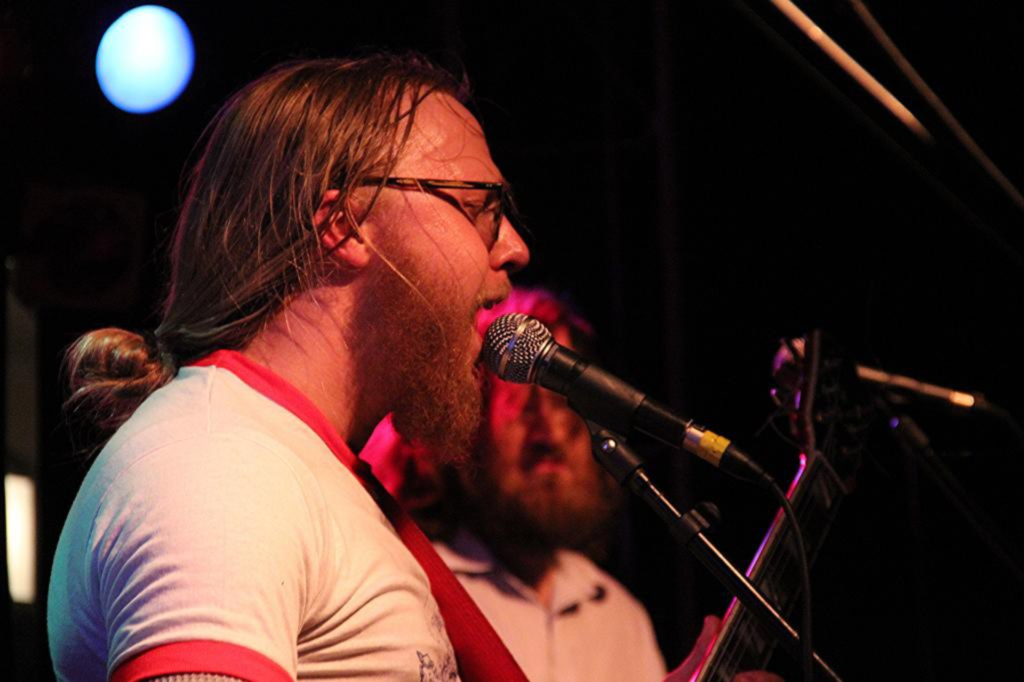 After a much-needed sustenance stop at a food truck for a comically large fried hot dog (nutrition first), it was back to RecordBar for the conclusion of Spirit Is the Spirit’s set and to close out the night with Why?. Spirit Is the Spirit’s lush harmonies and tight percussion had the crowd bouncing and dancing. The band’s name is a bit misleading and could throw you off, but fans of Fleet Foxes or Local Natives would find plenty to like here. 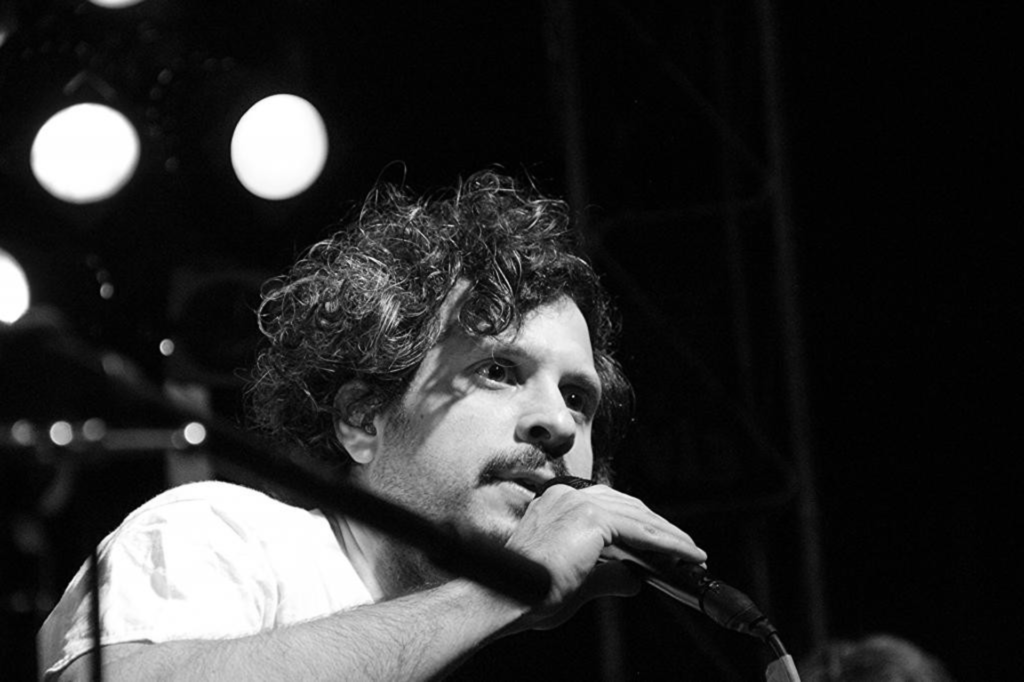 After a rather long delay in setup, Why? at last began to play a to a one-in, one-out crowd that was intimately and intensely familiar with the band’s material and Yoni Wolf’s self-effacing and self-immolating lyrics. And while Wolf is clearly the star of the show, those behind the instruments are equally impressive: Sharp, clattering percussion interplays well with xylophone, keyboards and guitars. The crowd responded with an extra wave of enthusiasm for “The Hollows,” during which the venue’s overhead lights came on. 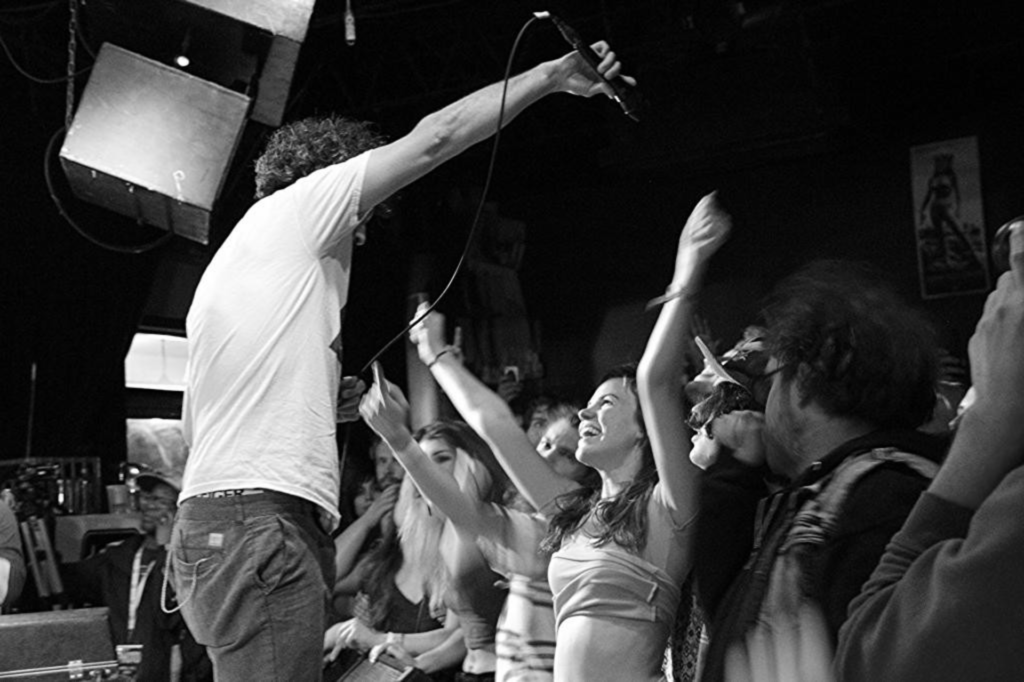 Wolf, sensing the audience’s disappointment, soldiered on, saying, “We’ll do one more, forget it. If they shut us off, we’ll go outside.” The band played “The Vowels, Pt 2,” and it’s bright call of “Cheerie-ee, Cheerie-ay” carried the audience to the end of the song, and then out the door. Back down the street at Westport Saloon and the Riot Room, the festival continued for another hour, but several hours of standing and walking around did me and my old back in. Yet back pain and all, this year’s festival hit all the right notes. Cheers to the Record Machine for another successful Middle of the Map.