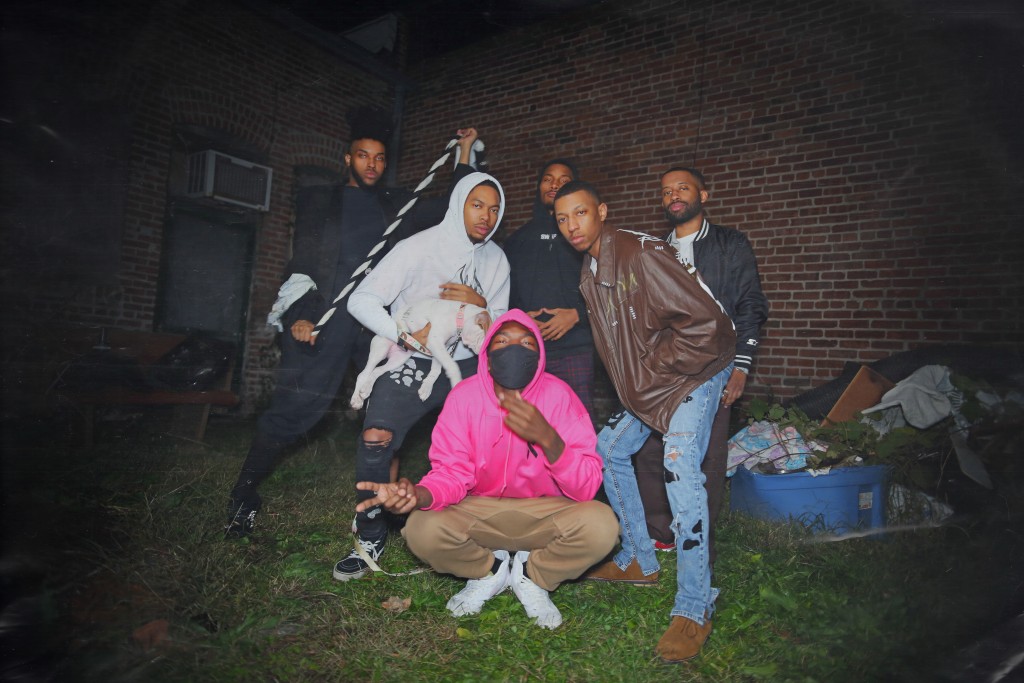 Originally intended to be a single short film, Middle Of Nowhere had been in the works for roughly two years before its first episode was uploaded back in August. The video series—named after creative director/graphic designer Tad-Michael’s discussions with coastal friends about living in a “flyover state” or “the middle of nowhere”—spends each of its four episodes thus far following a different Kansas City area artist and offering a dramatized version of the day-to-day struggles and small victories that a Midwestern creative experiences.

Tracking down a weed dealer, needing a haircut while strapped for cash, dealing with a reporter who doesn’t quite get what you do, watching your work finally come to life; if you make music, design clothes, or create visual art, you’re likely to find at least one moment in the series you can relate to.

Speaking with the core team behind Middle Of Nowhere via Zoom call last month, I got to learn a bit more about how they came together and what inspired the series. Brothers and directors Nick and Nate Littlejohn first met producer Chris Fields when Nick was buying a hoodie that Chris had made back in 2017 and ended up talking about their video work. Soon after, the three collaborated on music videos for Chris’s song “Pizza Rolls” and their friend and future MON collaborator Khari’s song “Say You.” The Littlejohns met Tad on the set of the “Say You” and the crew eventually began spitballing what would become Middle Of Nowhere.

Before they knew exactly where they wanted the project to go, the crew just started letting the cameras roll, logging footage of music, fashion, and art events that they and their friends were hosting at First Fridays. “We always wanted to do films that resided in Kansas City and show the creative side of things,” says Nate. “‘Cause there was this whole side that wasn’t being shown and we thought had hella potential to be big.”

“We were doing events, so when we would pull up at events, or while we’re preparing stuff, we would just turn the camera on and just capture the natural moments,” Tad says. “And as time went by, we had this whole stock of footage of us being creative and doing what we normally do. And then it was just like, what if we put a little spin on it and connected the dots in some kind of weird way, like mesh this clip with this clip, and it just kinda built itself naturally.”

Just as things were coming into focus, a one-two punch was thrown at Middle Of Nowhere. First, in August 2019, a tragic shooting death at First Fridays occurred, which led to the scaling down of the events that once provided a wealth of material and collaborative energy for the team. Next, the COVID shutdowns that began in March 2020 made production even more challenging than before.

The team agrees that First Fridays had been moving in a negative direction prior to the shooting, with more people attending just for the party atmosphere and with more financial obstacles being placed in front of artists who wanted to display their work there. “I feel like stuff in Kansas City just doesn’t last too long, so you can’t really bet too much on a First Friday or this or that,” Tad says. “You’ve gotta be impactful in those moments,” Chris adds before Tad poses me a question: “‘Cause the only thing consistent in life is what?” “Change,” answers your beloved reporter, correctly, to the astoundment of the four artists.

So they’re taking it in stride. As the lockdowns hit in the spring, the crew buckled down, shifted their idea from a short film to an ongoing series, and uploaded episode one in the fall. “It’s kinda just a love letter to what was,” Tad says.

Beyond serving as a fun-to-watch series showcasing many slices of Midwestern creative life, Middle Of Nowhere looks like it’s preparing to take a darker, and perhaps more artful turn. An extended trailer posted in December shows images of the crew being kidnapped and interrogated about the project in an eerie abandoned storefront. “Weird things are happening in the middle of nowhere” reads a promotional graphic posted on the MON Twitter account and in a By Design Magazine ad.

While parallels could be drawn between the recent rise to prominence of Black horror filmmakers like Jordan Peele and Nia DaCosta, the MON crew tells me some of the inspiration for this ominous, psychedelic shift in tone came from a less obvious source: Courage The Cowardly Dog. The phrase from the promo material is half-cribbed from the cartoon’s opening sequence where it’s explained that Courage and his family live in a fictional, rural Kansas town called Nowhere.

“[We liked] the idea of having the relatable [parts of the series] contrast with something like a Final Destination where something can happen in these regular peoples’ lives,” Tad explains. “‘Cause that’s kinda what the pandemic has shown us. Like, yeah, we’re living our regular lives, but something could switch up the next day, so why not play that up?”

As anticipation builds, the crew says the next episode of Middle Of Nowhere should be uploaded no later than this March. Before then, be sure to subscribe to the channel and get all caught up on all the fun you’ve missed so far.