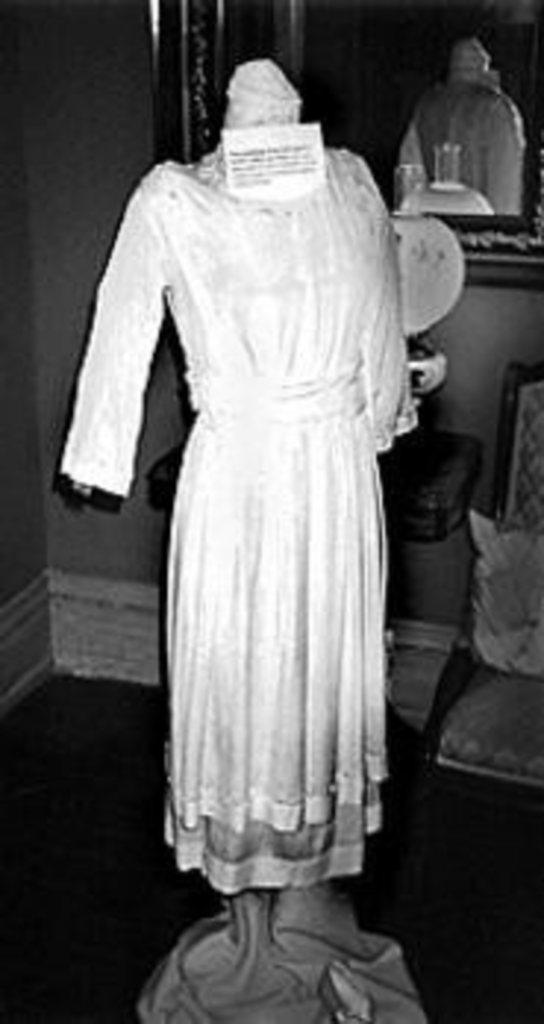 Stepping into the Vaile Mansion in Independence isn’t so much like stepping back in time as it is like seeing time stacking up in front of you, layer upon layer. The restored Victorian house was built in 1881 for entrepreneur Harvey Vaile and his wife, Sophia. But after her death, it was used as a sanitarium — the doors on the third floor still have wire mesh, which kept in the more unhinged residents. The house also has a small collection of wedding dresses from the late nineteenth century to the 1950s. Like most things in the house, the dresses stand freely in the rooms, tucked between the furniture rather than locked in glass cases. This makes a visit to the museum (1500 North Liberty) a cross between sifting through a curiosity shop and checking out the furniture in a quiet room at a house party. (You can even go through the closets.) In this setting, there’s something sad about the dresses, perhaps because of Sophia Vaile’s own unhappy ending. On Valentine’s Day in 1883, while her husband was in Washington on trial for mail fraud, she was found dead from an overdose of morphine. Sandra Dougherty, president of the Vaile Victorian Society, says it was probably suicide. A depressed Victorian wife, old lace and mad people in the attic make for a truly gothic experience. The wedding dresses are on display from 10 a.m. to 4 p.m. Monday through Saturday and from 1 to 4 p.m. on Sunday. The exhibit lasts through June. Admission costs $4 for adults and $1 for ages six to sixteen. For more information, call 816-325-7430.—Liz Smith

Discover your inner J. Lo at the Hip-Hop Workshop at City in Motion Dance School (3925 Main). The weekly class, taught by vivacious dance maven Gabrielle Lucas, covers isolations, jumps, spins, patterns and rhythms. If you don’t know what those words mean, fear not — Gabby promises to get you moving better than recurring-nightmare infomercial Darrin’s Dance Grooves. Students start with a warm-up, learn progressively more complicated steps and, at the end of class, perform an entire dance routine. Don’t forget to wear sneakers — this ain’t tap dance, folks. The workshop, from 7 to 8 p.m., is open to all ages and costs $12. To sign up, call 816-561-2882. — Sarah Smarsh

Nearly fifty painters, potters and photographers display their wares in downtown Lee’s Summit for the Creative Juice Festival of the Arts. The featured professional artists are accented by a juried student-art exhibit, and the entertainment stage includes a little folk and blues music as well as dance from ballet to flamenco. And lest anyone think it’s an event only for the kiddies, organizers have brought back last year’s popular wine garden. Festival Chairperson Ramey Neal says the daylong festival is a great convening place for such a rapidly growing community. The juice flows from 10 a.m. to 6 p.m. at Third Street and Southeast Main, near the historic railroad station. For more information, call 816-246-6598. — Steve Walker

People who think of urban revitalization as something that happens not in an architect’s office with a sketchbook but on the floor of an old bathroom with work gloves, tile and grout should make a trip to Habitat for Humanity’s ReStore at 4701 Deramus. It’s a huge warehouse stocked to the rafters — weekend remodelers drop off partially used cans of paint and other leftover materials, and ReStore sells them to other handyworkers for cheap. Volunteer opportunities range from helping customers at the cash register to scavenging for salvageable materials at work sites. And volunteers get first pick among newly donated finds. For information, call 816-231-6889. — Gina Kaufmann