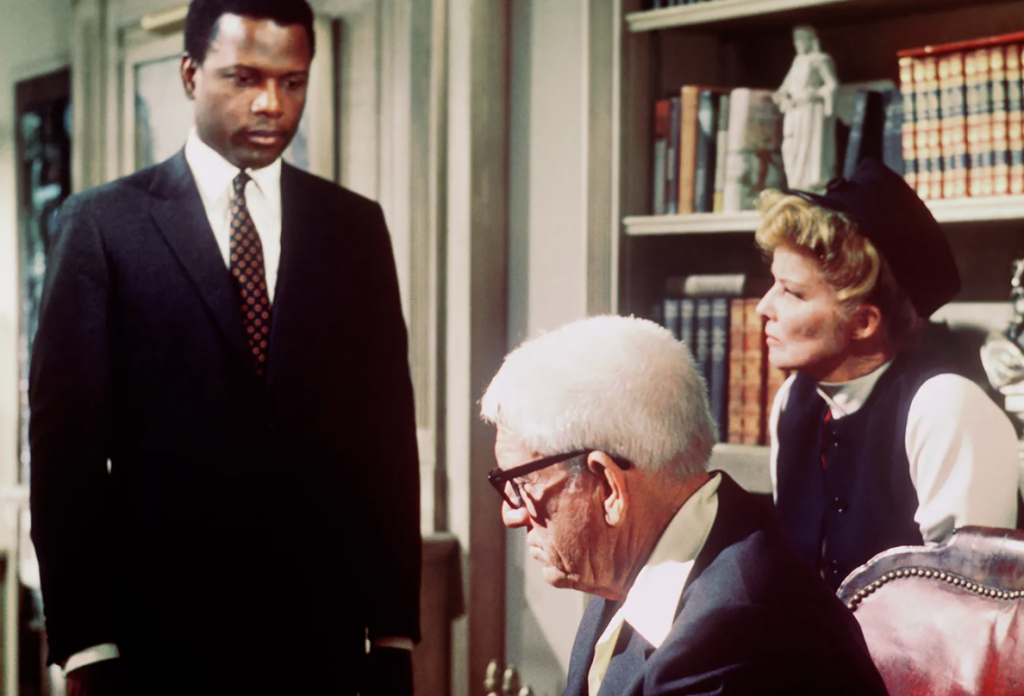 In the wake of Sidney Poitier’s passing, there’s a scene that we find ourselves revisiting from the 1967 film In the Heat of the Night—one that set the tone for two additional films in which Poitier would reprise his role as Virgil Tibbs, an African-American police officer in confrontation with a dubious mid-century America.

His initial exchange with Rod Steiger’s Bill Gillespie, a police chief in Sparta, Mississippi, is perhaps just as pivotal. There is a murder investigation underway and Tibbs is intercepted by local police as a potential suspect.

“Meanwhile, you just killed yourself a white man, just about the most important white man we got around here, and picked yourself up a couple hundred dollars,” Gillespie shouts.

“Colored can’t earn that kinda money, boy. Hell, that’s more than I make in a month! Now where did you earn it?”

“Now just what do you do up there in little ole Pennsylvania to earn that kinda money?”

Tibbs slowly retrieves his badge from his jacket and tosses it on the desk. Gillespie picks it up, opens it to look at the identification card, and gives Tibbs a silent, incredulous stare.

It’s not just his disbelief in Tibbs’ profession but the fact that Tibbs will not yield to his gaze, that he would dare look him back in the eyes and calmly but firmly assert who he is and why he ended up in his office. Tibbs has the audacity to take up space where Gillespie and others like himself don’t think he belongs—as a Black man from the North, a successful wage earner, and a fellow law enforcement agent.

This interrogation is an unsurprising exchange for anyone deemed “out of place” in society at large and questioned as a result. The idea that Mr. Tibbs not only exists but whose existence has implications beyond Gillespie’s racist worldview—that he is deserving of human dignity—is wildly unfamiliar, and that unfamiliarity is revealed in his condescension and open anger toward Tibbs throughout the film.

Viewers must also bear in mind that the state of Mississippi, where In the Heat of the Night takes place, didn’t desegregate schools until 1970, 16 years after Brown v. Board of Education.

Led by Gilbert R. Mason, Sr., and the Biloxi chapter of the NAACP, Black protestors were beaten by white mobs and local authorities for entering “white’s only” beaches between 1959 and 1963. The beachfront, 26 miles in length and taxpayer-funded, was not opened for everyone to enjoy until 1968. Sharecropping, a relic of the Reconstruction era, was finally on its last legs around this same time.

Perhaps the only implausible subplot in Poitier’s turn as Tibbs was that he made it out of Sparta alive.

That would not be the only time I worried for the safety of one of Poitier’s characters—Blackboard Jungle, A Raisin in the Sun, and Guess Who’s Coming to Dinner all come to mind. He demanded courage from his audience and his industry. A courage that he took great pains to cultivate both on and off the silver screen.

He joined his contemporaries, including his good friend and fellow performer Harry Belafonte, in supporting the Civil Rights movement. They contributed to organizing efforts at the March on Washington in 1963. They made a harrowing trip to the deep South, and narrowly avoided violence at the hands of Ku Klux Klan members during Freedom Summer—a voter registration campaign aimed at Black Mississippians in 1964.

He capitulated to what he deemed “the fabric of society,” which demanded that he portray Black male characters who retained their posture, despite the bigotry they grappled with. While civil rights grew increasingly militant in response to a country resistant to change, the Academy Award winner was defined by his deliberate pace on the long road to freedom. He opted for a willingness to play the long game for those who came after him.

Poitier’s best work examined the conditions of our humanity and the nature from which our biases and prejudices are formed. He forced us to contend with the liminal space between our past and future.

Because of Poitier’s wit and width throughout his film career, we were gifted a giant. He stood with poise, and a knowing gaze back at the rampant injustice around him. May we forever celebrate that in so many spaces, he opened the door for the rest of us to follow suit.

Categories: Movies
Tags: in justice, in memorium, In the Heat of the Night, Sidney Poitier, Virgil Tibbs