Voters will be required to present a government-issued photo ID to cast a ballot under a wide-ranging elections bill. 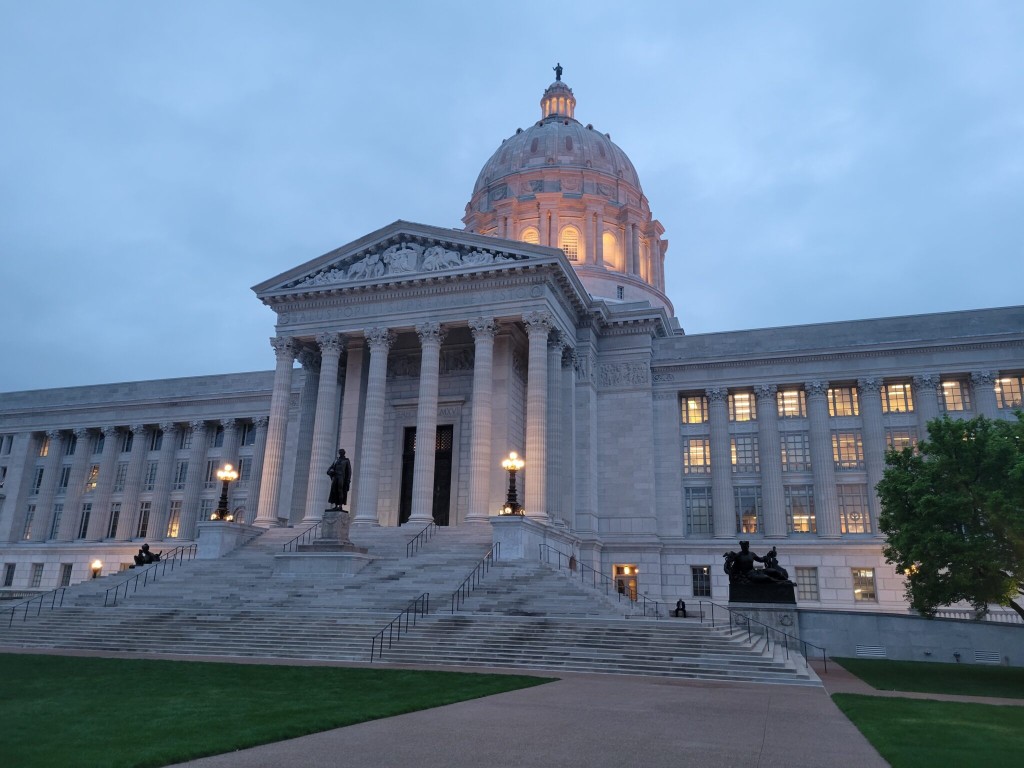 The bill is the latest in a 15-year Republican effort to enact a photo ID requirement to vote in Missouri. Legislation has passed several times, but it’s never been able to fully withstand legal challenges. // Photo by Jason Hancock/Missouri Independent

Missouri voters will be required to present a government-issued photo ID to cast a ballot under a wide-ranging elections bill headed to Gov. Mike Parson’s desk.

The bill includes several other provisions —  such as prohibiting touchscreen voting machines, and requiring a number of cybersecurity checks — that came out of hearings last summer, where legislators heard a parade of debunked conspiracy theories about the 2020 election. It would also do away with Missouri’s presidential primary and create a two-week window to cast an absentee ballot without an excuse.

But the main provision, and the most controversial, is the photo ID requirement.

Sponsored by state Rep. John Simmons, R-Washington, the bill is the latest in a 15-year Republican effort to enact a photo ID requirement to vote in Missouri. Legislation has passed several times, but it’s never been able to fully withstand legal challenges.

“Missouri has security and accountability and transparency in our election system,” Simmons said on the House floor Thursday. “We already have a good system. We just have to make sure it’s always better because Missourians want and deserve to know that their election system is trustworthy.”

The bill passed out of the House Thursday by a vote of 97 to 47 — one day before the legislative session ends. The Senate passed the measure on Monday. Democrats agreed to end a filibuster and let the bill come to a vote after adding an amendment to allow for in-person, no-excuse absentee voting during the two weeks before an election at the local election authority office.

A move to allow for satellite in-person absentee voting was squashed.

If the governor signs the bill as expected, registered voters would either have to get a government-issued photo ID or else only be allowed to cast a provisional ballot on Election Day.

The provisional ballot would be counted only if the voter returns later that day with a photo ID or if election officials can verify their signature based on voter records.

“This bill is a major disenfranchisement movement,” said Rep. Joe Adams, D-University City. “It is to deny people who have fought and denied for this right to vote. It’s an attempt to restrict their participation in the process.”

Members of the legislative Black caucus harshly criticized their Democratic counterparts in the Senate for letting the bill pass after what one referred to as a “lackluster filibuster.”

“The inside of me is hurting right now,” said Rep. Rasheen Aldridge, D-St. Louis. “I’m not that upset at the other side. I’m more upset with senators that look like me that could have stood up for hours.”

Rep. Kevin Windham, D-Hillsdale, said the fact that Democrats only stood up for nine hours was “sickening,” given the sacrifice their relatives made to have the right to vote.

Rep. Raychel Proudie, D-Ferguson, agreed saying, “If there’s a hill to die on, certainly this was one because frankly, there were hills that people literally died on.”

Simmons’ seven-page bill grew to more than 80 pages when it was combined with an election bill sponsored by Sen. Sandy Crawford, R-Buffalo, in a Senate committee.

The legislation would also require all election authorities or political subdivisions to have cybersecurity reviews. The secretary of state would be authorized to withhold funds from that election authority if they failed to do so, unless that funding is a federal mandate or part of a federal and state agreement.

Funds could also be withheld if the secretary of state finds a local election authority has not properly maintained their voter registration lists or accepts private donations.

Democrat senators argued against the proposal, saying that the “far right” wants to give unprecedented power to the secretary of state.

“In the environment that we’re in right now, with unfounded questions surrounding the last election, with a gubernatorial election around the corner, it gives me heartburn to put those types of fiduciary responsibilities into the hands of one person,” said Sen. Greg Razer, D-Kansas City.

There is no evidence of widespread voter fraud or irregularities during the 2020 election.

However, during legislative hearings held last summer, several people testified — including Rep. Ann Kelly, a Lamar Republican — that they believed a conspiracy peddled by MyPillow CEO Mike Lindell that claims the Chinese were behind President Joe Biden’s 2020 victory.

Witnesses said they could prove voting machines were hooked up to the internet, which Missouri law already prohibits.

It was these ideas that led to several of the measures in Crawford’s bill, including requiring that all automatic tabulating equipment and electronic voting systems to all be “air-gapped,” or disconnected from the internet or any network.

Local election authorities have repeatedly pointed out that election equipment is not connected to the internet. All that equipment is certified by the Secretary of State’s Office. They use an encrypted memory stick that’s certified by a bi-partisan election team.

The conspiracy theories were also behind the measure to ban electronic voting equipment as of Jan. 1, 2023, making the paper ballot the “official ballot.”

Election authorities said they certify elections off of paper ballots, and only use electronic equipment on election night in order to be able to put uncertified results out to the public.

Currently Missourians can vote absentee in advance of an election if they attest under penalty of perjury to being incapacitated or confined due to illness or physical disability, out of town, incarcerated, religious exemptions, or if they’re working at the polls on Election Day.

For those voting from home, the legislation requires that a person be incapacitated or confined due to illness or physical disability “on Election Day.” And if the reason for voting absentee is due to being primarily responsible for the physical care of a person who is incapacitated or confined due to illness or disability, the person voting would have to live at the same address as the person that is being cared for.

The measure impedes some voters with disabilities from casting an independent ballot, said Denise Lieberman, director and general counsel of the Missouri Voter Protection Coalition.

“While Missouri should join the 35 states that allow no-excuse absentee voting, it should be available to all voters, not just those who can take off work to get to the election office,” Lieberman said, “and certainly not contingent on a discriminatory photo ID provision.”

Under current law, in charter counties and the cities of St. Louis and Kansas City, if the election authorities receive 10 or more applications for absentee ballots from the same address, they may appoint a team to deliver and witness the voting and return of absentee ballots by voters residing at that address. The bill would require those teams to be dispatched.

It also bans future use of the mail-in ballots that were used during the pandemic.

Before Thursday evening’s vote, Rep. LaKeySha Bosley, D- St. Louis, pointed to the House chamber, saying few of her Republican colleagues were listening to the debate.

“We’re talking about democracy at its finest, the root of what our country in itself was supposed to be built on, the exact fabric,” Bosley said. “And it is empty in here. Lord have mercy.”