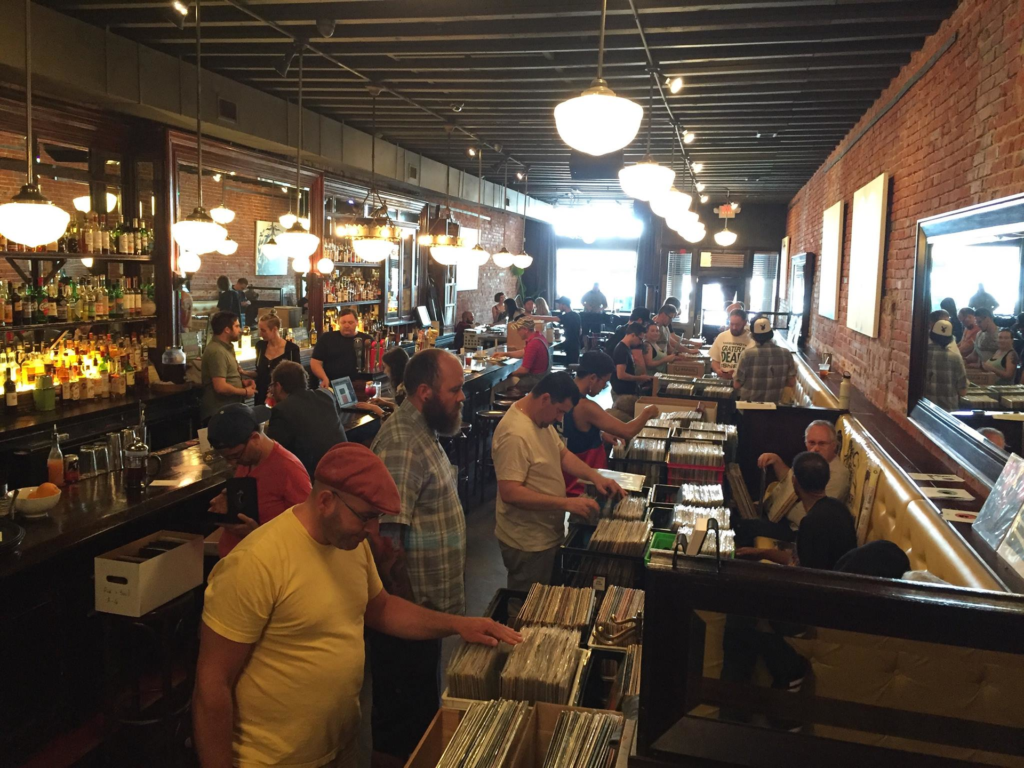 After the success of its first record fair, back in June, West Bottoms restaurant and bar Voltaire is playing host to a holiday version of the event Saturday, December 2. From 11 a.m. to 3 p.m., Got What U Like, Brothers Music and Vinyl Underground, among other local vendors and collectors, will dare you to give away as presents the cool stuff you find in their bins.

Voltaire’s Joe Darling says the thing about a record fair like this is that what’s on display isn’t necessarily what you can find anywhere else. Some of the most desirable pieces will come courtesy of vendors who don’t have brick-and-mortar presence.

“The dollar goes a lot further at shows like this, as well,” Darling says. “Generally, vendors are pricing records at or under their market value and — usually, but not always — you’ll find great records marked significantly lower than a record-store copy.”

A selection of vendors worth checking out includes Dave Schenk, who owned and ran Zebedee’s RPM on 39th Street; the rootsy record collection of local writer, editor and blues music conservator Jim O’Neal; and Wake Mitchell, host of KKFI’s Galactic Supermarket, who works at Brothers Music and formerly worked at Love Garden Sounds,

Darling is most excited about Columbia’s Dismal Niche Records & Tapes. “I can’t say enough about this label,” he says. “They’ve been unsung in Kansas City for the most part thus far, but they produce a world class crop of recordings from an array of regional folk, new age and experimental artists.”

Darling calls “ambient folk” the best categorical umbrella under which to place Dismal Niche’s stylistic sense. The label’s founder, Matthew Crook, is a collector, as well, and will have selections from the Dismal Niche catalog, along with crates of used material.

In addition to those selling records, Voltaire’s also offering up some folks spinning tunes while you shop. A few of these cats have played at Voltaire before, but the ones the bar asked are simply those they thought would play a good variety of engaging styles for a daytime event.

“DJ Shoutshimmy runs a terrific first-Thursday residency at Voltaire, playing all-vinyl Latin soul,” he says. “That residency is organically becoming one of the most delightful regular weekday events in KC.”

There will also be Dawayne Gilley, a major collector who does a regular event at the Ship called Dawayne’s Rare Record Party. There’s also J.G. Wright, the man behind Expo 70, who Darling calls probably Kansas City’s preeminent collector of European psychedelia and early electronica records. Finally, DJ Elwood is another Voltaire regular, who specializes in disco, boogie and funk.

“It’s an important community project,” Darling says. “It seems like there are less and less occasions to leave the house these days and I’d like to think that there are still good reasons like this to do so: finding and geeking with people who share an interest in recorded music, in the tangible proof of life that a vinyl record is.”

The complete list of vendors and further details is here.