Visionary ceramist Don Reitz leaves his fingerprints on the Belger 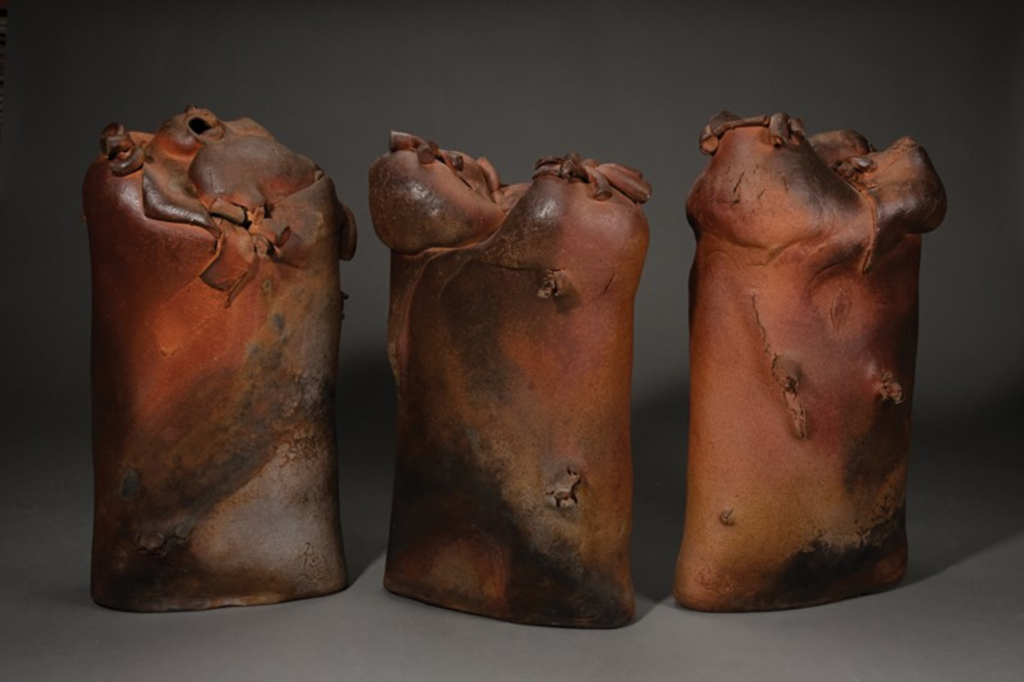 Over a career that spans half a century, Don Reitz has become a legendary ceramist. But his real medium might be time.

In the artist’s statement that accompanies Reitz’s eponymous exhibition at the Belger Arts Center, he reminds us of the essential connection between time and ceramics. Time “hardens and colors the clay,” he writes, while giving him space to “think and look inward.”

Before the ceramist’s process hardens it, clay is dug up from a planet that, gauged against a human life, is ancient. And pottery is one of our oldest art forms, durable enough to last for centuries. At 82, Reitz understands the passage of time and has long since mastered transforming it into objects of weight — weight measured in mass as well as in emotional importance. It’s a mastery on impressive display in this retrospective of more than 100 Reitz sculptures.

The artist’s hand is visible everywhere here, sometimes literally (as a painted print on the surface of a hefty platter, for example). Like fossils in stone, evidence of his manual labor — pinches, gouges, the long contact with vessels formed on the potter’s wheel — is engagingly visual throughout.

The works are arranged in the second-floor gallery so that, if you begin by walking in and making an immediate right, you can proceed studiously through the years. You start with Reitz’s well-crafted products of his graduate-student work, which clearly demonstrate his ownership of the medium, then move counterclockwise to the “Sara” shields, platters and vessels of the 1980s. At last, there are the numerous towering forms — tea stacks, kachinas, large jars — forming the apex of the artist’s interaction with clay as a structural expression of the time and energy invested in it.

The sheer scope of the exhibition, however, makes any disciplined adherence to a timeline almost impossible. As with the experience of entering a roomful of party guests, you feel an eagerness to run up to each simultaneously.

On the first floor, you’ve already met very quiet Asiatic tea bowls lined up neatly on a cabinet off to the side. In the center of that room are some of Reitz’s most recent works: totem tubes painted with designs scattered over scratched surfaces. These are huge clay pipes, in fact, that come from a sewer factory in Phoenix. The deviation from the physical demands of throwing, moving and firing is an interesting maneuver for someone Reitz’s age.

This show’s contents remind us that Reitz has never been afraid of collaboration or assistance. In fact, during the five years after a car accident that left him unable to use his left arm and leg, students made slabs and shields for him, on which he drew using tools and glazes. It was during this period that his 5-year-old niece, Sara, was diagnosed with liver cancer. The letters they exchanged helped them as they both healed. Sara’s drawings and Reitz’s childhood memories lend colorful life to his work of that period. Charming messages etched into the clay comment on the dreamscapes: “Hay, I’ve been down this road beford [sic],” “An excess of the sensible,” “Don’t walk in your flesh all the time,” “Don’t worry we can find it again,” “Tomorrow this will be just an echo down a rusty railroad track,” “Hold tight I’m coming.” Like 3-D storybooks, the pottery from this part of Reitz’s career shows derailing trains and dragons. There are also people, part of narratives as nonlinear as real life feels.

Reitz’s own career has followed a path not uncommon for artists of his generation. After serving as a diver for the U.S. Navy and studying painting on the G.I. Bill, Reitz did graduate work in the 1960s at Alfred University and then joined the faculty of the University of Wisconsin-Madison for more than two decades. Over the past 20 years, he has lived on a remote ranch in Clarkdale, Arizona, with four wood-fired kilns that continue to give him the satisfaction of creating. Reitz also has taught thousands of workshops — at least one in each of the United States.

The Belger Arts Center is known for presenting large-scale, important exhibitions of some of 20th-century art’s major players: Jasper Johns, Terry Winters, Sun Smith-Foret, Robert Stackhouse, Wendell Castle. Its Reitz exhibition is very much in that vein, and Kansas City has benefited from the inspiration of Evelyn Craft, the center’s executive director, who had the vision to curate this display during Reitz’s lifetime.