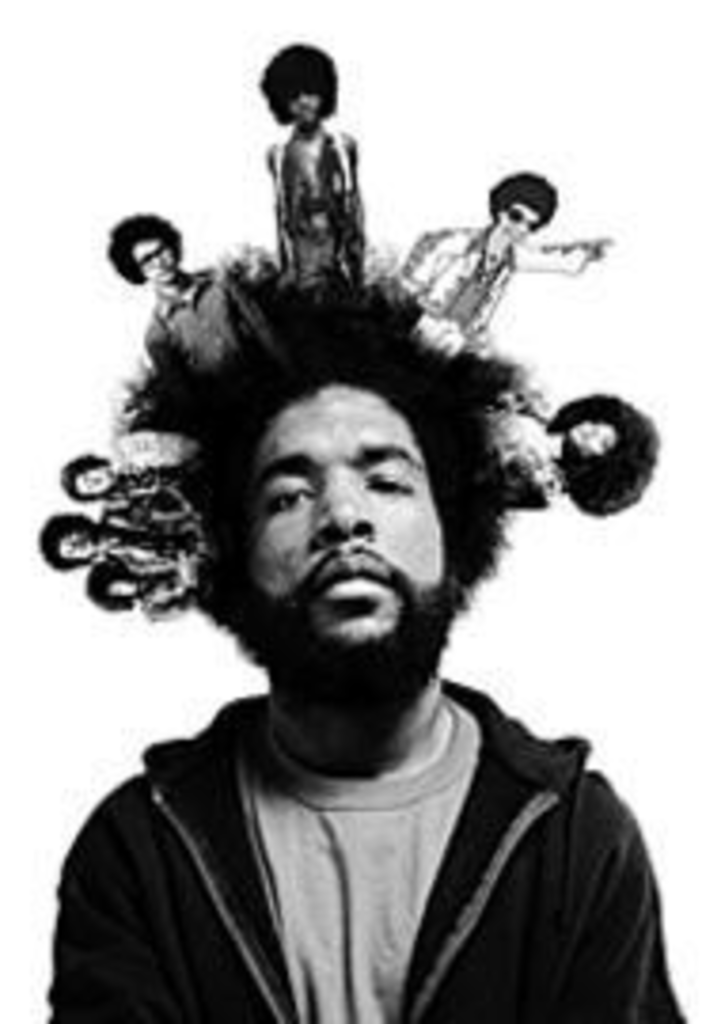 Ahmir Khalib Thompson is the coolest motherfucker on the planet.

Musician. Producer. DJ. Actor. Talent scout. Social commentator. Svengali behind the Okayplayer hip-hop community. A man who can pull off punctuation in a stage name: ?uestlove. The kick-ass drummer of the ass-kickingest hip-hop collective on Earth.

Oh, yeah. And then there’s his hair.

The man has spectacular hair. Iconic even. The dark, glorious cotton-candy plume serves as a metaphorical mushroom cloud rising above a desolate hip-hop landscape as the man beneath the mane drops proverbial bombs on the music community.

He was once just another close-cropped kid who loved jazz and soul. He and MC Tariq Trotter formed the Roots after they met in the principal’s office of the Philadelphia High School for the Creative and Performing Arts. The pair gave themselves new names —?uestlove for Thompson and Black Thought for Trotter — and enlisted a supporting cast to form a group that went on to put out two of the best hip-hop albums — 1999’s Things Fall Apart and 2002’s Phrenology — of the past five years (earning a Grammy in the process).

The Roots are among the progressive Outkasts of popular hip-hop. The group’s new album, The Tipping Point, aspires to duplicate the central tenet of the Malcolm Gladwell book it’s named after, which asserts that ideas, messages and behaviors can be spread like viruses.

But every band in uncharted waters needs an anchor. And ?uestlove’s Afro serves as the literal and symbolic ballast that keeps the Roots on an even keel.

Is it a coincidence? Is ?uestlove’s hair — allegedly last shorn on prom night, June 2, 1989 — really a conduit for channeling creative genius? Does it absorb musical acumen from across the ages? Sure, why not. To prove it, we say screw Kevin Bacon — here’s six degrees of ?uestlove.

Sly and the Family Stone
Throw a hair pick into the ’70s, and you’ll snag the mutton chops of at least a dozen artists who have influenced the Roots. But ?uestlove’s ability to harness a groove and hitch it to subversive soul owes a debt that The Tipping Point repays with “Star/Pointro,” which includes a sample of Sly’s “Everybody Is a Star.” And there really was enough room for everybody — or at least two or three garden gnomes — to be a star inside Sly’s pompadour ‘fro.

The Jackson 5
I’m Ahmir Thompson, bitch! Doesn’t have quite the same ring, does it? But whereas ?uestlove probably wouldn’t endorse putting cigarettes out on prostitutes, he has appeared on Chappelle’s Show, home to the infamous Rick James skit that sparked the domestic-abuse catchphrase of the year. For his part, James is a staunch friend of the embattled Jackson family, who, in happier times, taught us the A-B-Cs of sporting righteous hair helmets.

The MC5
The Roots’ social commentary is a smidge more cerebral than shrieking, “Kick out the jams, motherfuckers!” But the group does share a penchant for politics with the White Panther Party’s one-time de facto house band. The Roots also toured with Rage Against the Machine — which did a scathing cover of the MC5’s “Kick Out the Jams” — before fiery frontman Zach De La Rocha enlisted ?uestlove’s production expertise for his solo material when Rage disintegrated.

Earth, Wind and Fire
Afro Sheen might be impermeable to the elements, but it doesn’t stand a chance against Earth, Wind and Fire. Having absorbed that group’s funky grooves and groovy funk, ?uestlove included EWF’s “Clover” on his Babies Making Babies album of rare skins-slapping tunes.

Cedric Bixler and Omar Rodriguez
The quirky, dueling puff balls of alternative hard rock, Bixler and Rodgriguez first captured their eclectic mix of heavy rock, Latin-influenced jazz and experimental freakouts as At the Drive-In before becoming the Mars Volta. At the Drive-In was signed to the now-defunct Grand Royal label, owned by the Beastie Boys, for whom the Roots opened shows.

Art Garfunkel
There would seem to be little connection between a pasty Jewish folkie from Queens and a streetwise hip-hop collective from Philadelphia. And you’re right, there isn’t much — beyond Garfunkel’s curly, redheaded-stepchild ‘fro. But both A-Gar and ?uestlove share a love for soulful songwriting … and rooting for the Phillies.

Ludacris
Ludacris sported the largest Afro in human history — albeit digitally enhanced — for his “Stand Up” video. But even though Luda and the Roots reside on opposite ends of the hip-hop spectrum, Luda did have Kanye West produce “Stand Up” when West wasn’t working with Jay-Z, who happens to have employed ?uestlove in the same capacity.

The Jimi Hendrix Experience
The Jimi Hendrix Experience is arguably the most formidable ‘fro trio in history. The guitar god had a credible do of his own, but drummer Mitch Mitchell and bassist Noel Redding boasted some of the most wicked Afros (or is it Anglos?) ever to burden the heads of white men. Both the Roots and the Experience enjoyed stretching musical boundaries, and ?uestlove channeled the Voodoo Child as the driving force behind D’Angelo’s Voodoo.

Erykah Badu
Erykah has a ba-ba-ba-bad do. And the soul sister shares similar artistic vision and purpose with her Okayplayer compatriots in the Roots. Badu also helped ?uest and the gang capture a Grammy when “You Got Me” — on which Badu contributes vocals — snagged the award for Best Rap Performance by a Duo or Group in 2000.

Disco Stu
Disco Stu lives the ’70s. ?uestlove loves the ’70s. ?uest sports a rockin’ fro. Stu does, too. Stu wears killer goldfish platform shoes. Alas, ?uest won’t let us peek in his closet. But we do know that Stu’s neighbor Homer Simpson once starred in a Lollapalooza-style festival by catching a cannonball with his ample gut. The Roots cut their teeth performing on Lollapalooza’s second stage. There is no word on ?uestlove’s ability to absorb artillery.