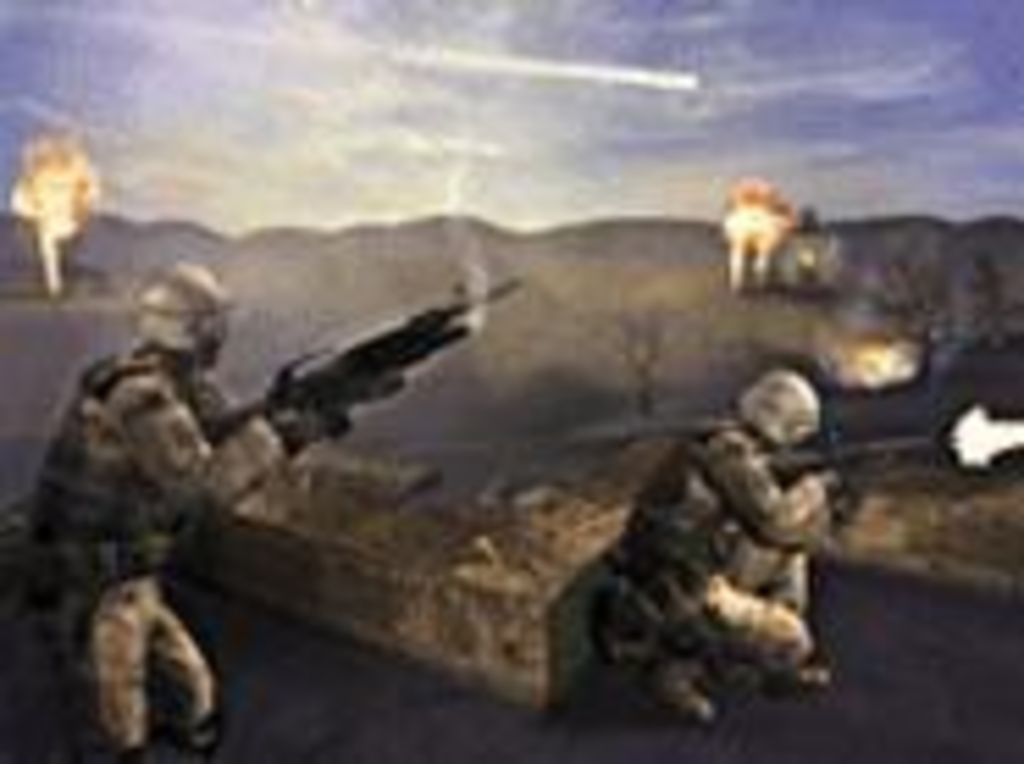 No wonder Iraq is a mess. If the battlefield in America’s Army: Rise of a Soldier is an accurate picture of what it’s like in the Middle East, we should cut and run ASAP. The United States Army’s officially licensed shooter puts you smack in the middle of the action in an Iraq-like country bearing all the familiar landmarks: desert towns, mountain redoubts, improvised explosive devices, and hordes of angry insurgents.

The game’s impressive realism makes this anything but your normal run-and-gun shooter. It’s hard to kill and easy to die. One well-placed shot will take you out, soldier.

Like its popular PC predecessor, America’s Army serves as a recruiting tool for a hollowed-out military trying to enlist the gamer generation. Set to a thumping rap-and-rock soundtrack, the game is filled with chest-puffing talk of honor and pride, as well as video clips of macho soldiers staging maneuvers.

But America’s Army also attempts to instruct. Ubisoft, the game developer, worked with actual soldiers, known as “subject-matter experts,” or SMEs, to fine-tune the details of combat. When you come under fire, your gun twitches in your nervous hands and accuracy degrades. Likewise, when you lay down suppressing fire, the enemy can’t hit a thing.

As you advance through the ranks — from lowly grunt to special forces commando — you acquire skills that boost your chances of survival, such as how to provide security for your squad and when to use smoke as cover. After a couple hours of game play, it’ll seem like second nature.

There’s only one problem: Your fellow soldiers suck. Most of them can’t hit the broad side of a ziggurat. Even the elite special forces are poor shots. They leave you exposed while they saunter across dangerous streets, bouncing grenades off walls and into your face. They even hide behind explosive drums, waiting to be blown sky-high.

If you make it to the final level — a brutal escape from a Fallujah-style town, after a rocket-propelled grenade downs your Blackhawk chopper — you’ll encounter Sergeant Rosen, a man who puts the “special” in special forces. Rosen has either a death wish or a string of bad code in his constitution. He charges pell-mell into swarms of bullets. Slay nine enemies, and the tenth will invariably nail Rosen right between the eyes.

Normally, the sergeant’s demise would be reason to rejoice (no more stray grenades or exploding drums). But the “rules of engagement” stipulate that almost all your troops must be alive to finish the mission. In both life and death, Rosen is a big liability.

So are the other flaws in the game. Design glitches cause insurgents to materialize out of walls. And it’s almost impossible to climb down a ladder without falling.

Then there are the conceptual glitches. As might be expected, the game is part agitprop. Crass jokes are made at the expense of the bad guys. When they’re not getting killed, the residents of the country — or “indigs” — babble nonsense in a phony foreign tongue. It’s not hard to see why the American military is losing the battle for hearts and minds: It can’t even scrub the hubris from its own PR vehicle.

Donald Rumsfeld once famously said that “you go to war with the Army you have.” If this game is any indication, we’re in more trouble than we thought.