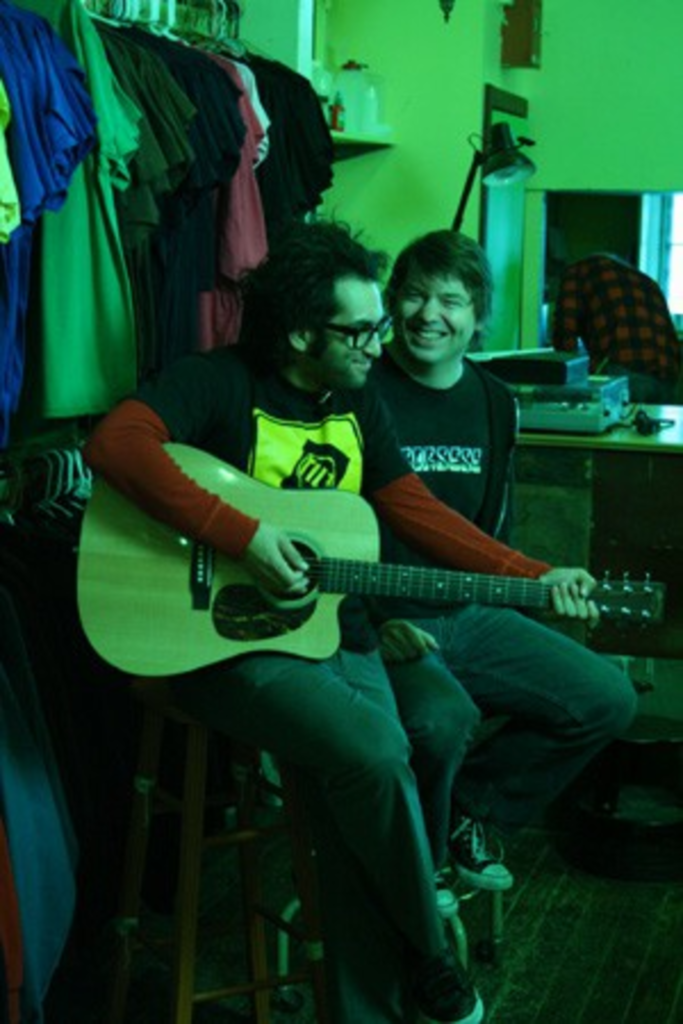 Motion City Soundtrack‘s new album, My Dinosaur Life doesn’t come out until January, but that hasn’t stopped frontman Justin Pierre from promoting it.

The full band heads out on tour opening for Weezer on December 1, but Pierre’s been traipsing about the country playing shows such as the one he did yesterday at Love Garden in Lawrence.

Well, maybe not exactly like the one he did at Love Garden. Before Pierre played few songs, he sat down with Eric Melin and recorded a review of New Moon for Scene-Stealers. It was Scene-Stealers’ first review with an audience, too.

Pierre then strapped on a guitar and played four songs for a crowd of twenty or thirty excited fans (most of whom, like myself, are probably bummed that the full band isn’t coming through here on that Weezer tour). His voice rang out true and clear, as he played without any amplification whatsoever. The first song, “Broken Heart,” featured some playful joking, as did the last song, “Disappear,” which is MCS’s new single.

There a few requests that were unfulfilled — the big fans always request the obscurities, don’t they? — as well as some kid who requested “Friends of P,” which is a song by the Rentals. He was roundly mocked.

After Pierre finished his set, they jacked an iPod into the Love Garden stereo, and everyone got to hear the new album. He also played a show at Blue Collar Distro last night, which I was unable to attend. If anyone got a chance to check it out — Pierre had promised a longer, fuller set — post your take in the comments.