Video games that are absolutely not pandemic escapism 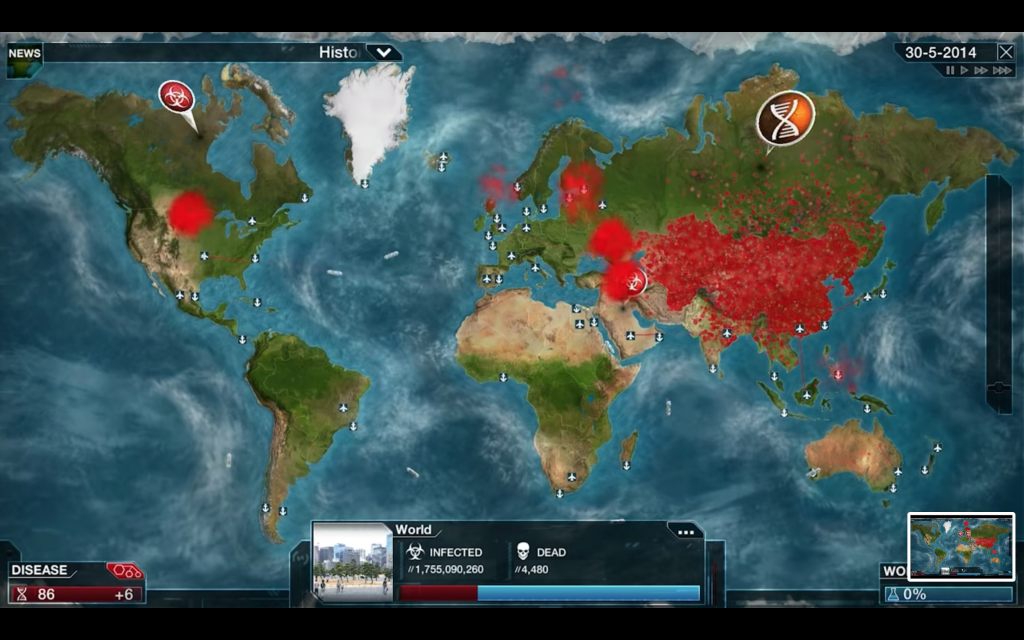 The plague as a game. // Screenshot by Brock Wilbur

COVID-19 is spreading around the globe and as a result, many folks are stuck in their homes while they practice social distancing. So it seems like a perfect time to play some fun, carefree video games. Or you could play games about pandemics, viruses, and diseases. It might seem weird, but these games can offer us all something we so desperately want in these dark times: Control. I might not be able to save people in the real world, but I can do just that in video games and even earn a nifty little achievement for doing so.

Here are a few games that focus on nasty viruses and outbreaks of deadly diseases. I promise you, this list is fun. Trust me. We’re all going to have a good time, okay?

Something I’ve thought about a lot while sitting at home looking outside and remembering the old world is how in a strange way, zombie games and movies might be my only real experience with a global and dangerous pandemic. I wasn’t around in 1918, so I missed that whole Spanish Flu thing and recent outbreaks of Ebola and Bird Flu were contained and didn’t spread nearly as much or as quickly as COVID-19. No, my only real experience with something like Coronavirus is zombie viruses from games like Resident Evil.

In these games, the most recent of which is a remake just released on PS4, Xbox One, and PC, you usually play as a tough badass who can easily shrug off the infection that seems to kill everyone else. Not only does the star of Resident Evil 3, Jill Valentine, get to run around without a mask on, but she can also actually find a cure for the disease and help save people. And even better, the whole virus situation can be blamed squarely on a giant and evil corporation. You don’t get that kind of satisfaction in the real world.

They say the best way to defeat your enemy is to become your enemy and in Plauge Inc, a popular mobile game released a few years back, this is exactly what you do. You star as a virus or a disease, you get to choose. Like picking a character in Street Fighter, virus you pick has different strengths and weaknesses. Maybe you can spread quickly, but you produce symptoms that are very noticeable. Maybe you are hard to kill but aren’t very deadly. The choice is up to you. Then you spend the rest of the game spreading around a map of the world, trying to infect every country before they can shut down their borders or create a vaccine.

In a recent update, the creators of the game decided to shake things up and let folks fight a global virus. If you watched the news over the last few weeks and felt like our leaders were doing a terrible job and that you could do better, Plague Inc is for you. This is the game that will let you fight back how you see fit. And if you end up saving the globe, maybe shoot an email over to the President with some helpful tips. It seems like he needs them.

The most important people right now are all the folks working at hospitals and clinics, fighting to save lives and stop this damn virus from wiping us off the map. However, in the United States, our medical system is…broken. I was trying to find a funny way to say that, but honestly, I can’t come up with a joke. But in Two Point Hospital, you get to help save lives while providing affordable healthcare. Or you could be a jerk and raise the prices on everything in your hospital. But then you would be an asshole and we don’t need more of those right now.

The viruses and diseases you combat in Two Point Hospital are silly, such as people with balloons for heads or overly long necks that need to be shrunk back down to normal size and oh god…those sound terrible now that I’m writing them out. In the game, with silly sound effects and British charm, I promise it’s not a nightmare. It’s a cute game that lets you control and build a hospital. Think Sim City, but with only one giant building a lot of rooms and chairs.

The world of Mario, filled with magic and cute creatures, is not safe from diseases. So Mario, a plumber with no formal medical training I might add, decided to become a doctor. This might seem wild or even dangerous, but over the years he has proven to be an effective doctor. How you fight viruses and diseases in Dr. Mario is by playing a Tetris-like game, where you match different colored pills to similarly colored viruses.

In the most recent Dr. Mario game, everyone you know including folks like Luigi and Princess Peach and even Yoshi, have put on white lab coats and are now doctors too. Sure. Why not? It turns out all you have to do in the Mario universe to be a doctor is toss pills at different colored viruses and you’ll succeed. If only the real world worked like that. Though I’m not actually a doctor, so maybe it does. How knows? (Editor note: It doesn’t work like that.)

Back when The Division 2 came out in early 2019, I didn’t buy the idea of a pandemic starting in New York and destroying the entire country. Fast forward and in 2020, as the game keeps getting updates, I find it harder and harder to NOT think about how this could happen. But The Division 2 also shows that people can come together to create groups, helping each other survive through a terrible disaster. Sure, some of these groups are dangerous bands of maniacs who use flamethrowers to kill people, but at least they are working together and that’s always nice to see.

In The Division 2 you and everyone else playing the game are super cool Division agents, who are the best of the best. You have a cool watch and gas mask that never runs out or gets gross. In fact, gas masks are one of the most common items you will find while playing this game. Having over a dozen masks in my inventory that are worthless in the game and then seeing news reports of nurses and doctors having to use trash bags and scarves to protect themselves while treating people isn’t making it easy to come back to this game each week. But each time I log in I help some folks find food or water or even help the government, what’s left of it, find a cure. And that’s why I keep coming back. One day I’ll finally help solve this damn problem and if an idiot like me in a video game can stop a pandemic, it seems very likely that a bunch of smart people in the real world will be able to do so too.

So. There were these two games that did a weird build on each other. The first was a game about you becoming a superhero by being infected with a terrible virus that ruins your life. [Prototype] is set within NYC, and bad science experiments result in zombie-type monsters over-running the city. Things start pretty low-level and spiral wildly out of control, until people are living in constant panic. It’s unpleasant, until everyone starts staying inside.

In [Prototype] 2, you play as a different character, whose family was killed by the hero of the first game. Okay. That’s already a very weird switch-up for any pop culture sequel, in any format. The fascinating part of the epidemic now is that different areas of NYC are now dealing with a long-term monster infestation. Each zone of the city varies from totally over-run by freaks to sections that are continuing forward as if nothing was happening. The idea of such a metropolis figure out how to segment in such a way as to “open the economy back up” creates a hopefulness for our new normal.