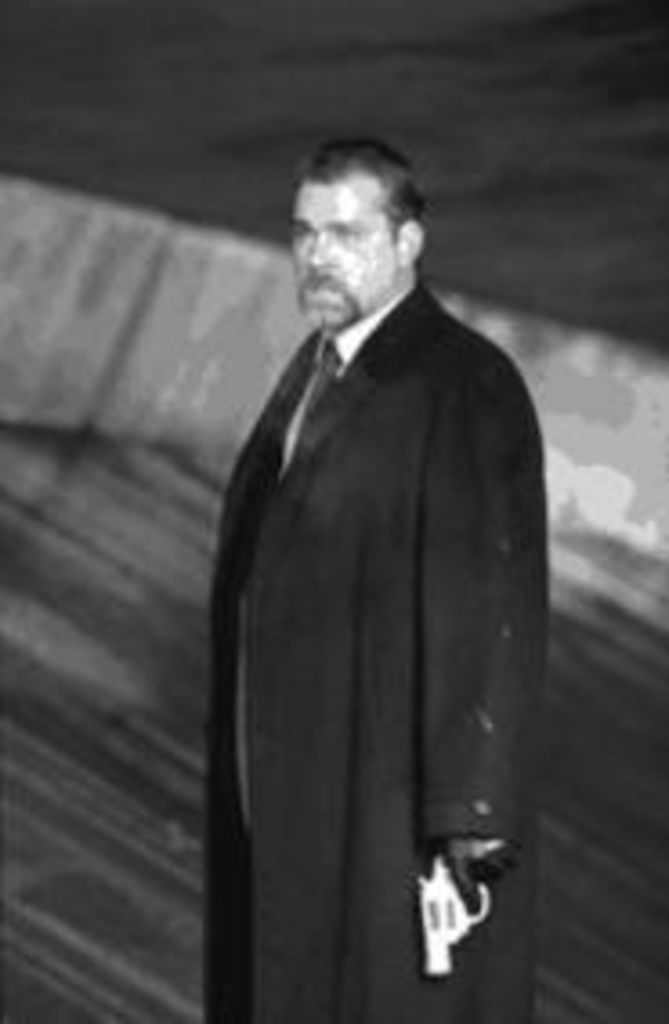 As far as he can remember, he always wanted to be an actor. To him, being an actor was better than being president of the United States. Even before he first wandered into the high school auditorium for an after-school audition, he wanted to be one of them. It was there he belonged. To him it meant being a somebody in a neighborhood full of nobodies. Actors weren’t like anyone else. They did whatever they wanted. They’d wear tights and nobody would ever give them any trouble. In the summer when they did Cabaret and West Side Story all night, nobody would ever call the principal. He was the luckiest kid in the world.

Far as he’s concerned, he still is. No matter how many bombs he detonates, no matter how many good roles they hand off to some blond kid instead of him, they won’t be able to take away from him what he’s already done. His dad would remind him of it, tell the boy he’s got two immortals to his credit, what else does he want. One’s called Field of Dreams, in which he played a friendly ghost in black socks. Other’s called GoodFellas, in which he got to play gangster dress-up with De Niro and Pesci, who wanted to know if he thought he was funny. They’ll live forever, his dad would say. Everything else puts food on the table, so what’s the problem? Like his old man told him: “At the end of the day, it’s a fucking movie. What ya complaining about?”

A lot, actually. You can’t blame him; you can’t stop him. And he’s not doing it just to bitch, just to make noise. Ray Liotta’s always worked, ever since he was at the University of Miami doing Sound of Music in the mid-’70s, dancing and singing as one of those kids who couldn’t keep their Von Trapps shut. He was Joey Perrini on Another World for three years, 1978 to 1981. He made TV pilots after that, did a movie with Pia Zadora called The Lonely Lady. That was 20 years ago. Going downhill would be uphill after that. No wonder he doesn’t mind talking about Muppets in Space, in which he got to sing with Miss Piggy. Hell, he’s the one who brings it up.

See, everybody knows who Ray Liotta is. They just don’t seem to care all that much. He possesses a reputable filmography, especially the early stuff, but he’s no Brad Pitt, no Tom Cruise, no Tom Hanks, no Mel Gibson. He’d like to be—who wouldn’t?—but never had the chance and never gets the shot. He lit the screen ablaze in his first major role, as dangerously nuts ex-hubby Ray Sinclair in Jonathan Demme’s 1986 Something Wild. He laced up as Shoeless Joe three years later, went to work for Marty Scorsese the next year, then found the fire had turned to smoke had turned to soot. Of the 14 movies Liotta made in the 1990s and into 2000, maybe you heard of, oh, two. Counting Operation Dumbo Drop.

“The only thing that I want to prove is them wrong for not casting me in bigger and better movies,” Liotta’s saying now, sitting in a Dallas hotel room. He sits almost perfectly still, but his voice moves all over the place; one minute he’s speaking in a near-whisper, the next a pleasant bark. “At the end of the day, I want to work with the best people. I want to be up on the list where I get the opportunity. Now, I don’t necessarily want to be Brad Pitt or one of those guys; I just want to prove that I don’t like losing. I hate to be up for something and to lose it, not to Owen Wilson per se—nothing against anybody—but you’ve got to, you know…”

Hold up for a sec. Back up the tape to a moment earlier in the conversation. First off, the reason we’re in this hotel room is so Liotta can promote his new movie Narc, in which he and Jason Patric play—what else?—ratty drug cops looking to catch a cop killer, or so the plot synopsis goes till all hell breaks loose in the twisty third act. Liotta’s awfully proud of the low-budget picture, directed by a guy, Joe Carnahan, whose first movie was so awful its name cannot be spoken in polite company. Liotta produced Narc. He took a chance on Carnahan when smarter people than he would have passed, given his sketchy history. Nice, meaty role in a gritty ’70s-styled cop crime movie? Smells like a Rush of a comeback, marinated in Serpico and served with a side of Denzel. Already he’s been nominated for an Independent Spirit Award as best supporting male; he’s not coy enough to deny he’d like bigger, shinier prizes.

“Narc has given me my profile back again, and I’m getting further up the list,” he says, grinning. “I’m getting back in the movies that were more successful. The heat that we’re getting on this is really great; we’re getting mentioned right now for end-of-the-year stuff and, you know, with the predictions. Not that that matters, but it helps with the profile.”

But Liotta pretty much had to take a chance on a $3 million movie. He was down in the valley, he’ll tell you—”never below the surface,” he says, but just out of eye level. His luck improved in the new millennium—Hannibal, Heartbreakers, Blow and John Q gave him proud paychecks—but still, he was a bit player in those movies, fourth or fifth or sixth on the bill, a glorified cameo in old-man makeup or a bad guy without half a brain after Tony Hopkins got through eating it. He’d been at the top, then started the slow slide to the middle that happens to all talented actors not possessing pretty faces and blank stares. It’s often been said of Liotta he’s too intense for his own good; hell, even his Shoeless Joe looked like the kind of guy Kevin Costner shouldn’t have left alone with his wife when he went looking for James Earl Jones. So he got typecast as crazy cops and psycho killers, and nobody took him seriously when he tried to play softies. Bad things just happen when you’re a butcher’s blade in a drawer full of butter knives.

About Owen Wilson, then. Turns out Liotta now loses parts to guys like Owen Wilson. Happened just recently: There’s a script floating around in which an FBI agent poses as a movie producer to catch a bad guy infatuated with the movies. It’s a comedy, of course, and Liotta and Wilson were up for the part of the agent. Guess who the studio wanted. “But who knows after I Spy, since that wasn’t too good,” Liotta says, chuckling.

What irks Liotta, among other things, is that most of what’s been written about Narc doesn’t have much to do with Liotta. It’s been turned into a business story, that of the little indie that became a major-studio release after Tom Cruise saw it and decided to lend his name to it as exec producer and get it a wider release than Lions Gate could muster. It’s now a Paramount movie, this $3 mil indie, celebrated not for its performances but for the, ahem, risk Cruise took by lending his name to someone else’s finished product. It’s a better story that way: Like the writer said in the New York Times Magazine not long ago, it’s not like Liotta’s exactly Vanity Fair cover material. Not like Cruise.

“Yeah, that pissed me off,” Liotta says. Pause. “But it’s true. Vanity Fair, what they do is, they need to sell magazines. I would think it’s more interesting to read about somebody that you don’t know about than have the usual suspects that just rotate covers. It’s the same people, but the nature of the business is that’s how they think, and they’re not going to take a chance. Everybody, they spend too fuckin’ much, they want too big of a piece of the pie, so what they do is they compromise their magazine and they compromise movies because it’s the same, it’s the usual suspects. Well, ha, look at what I Spy did. So, you know what, it serves you right because you fucking went with the usual suspects. Good for Owen, because he’s the new guy in town, but they went for the usual fucking suspects.

“Now, if Narc does well and we get nominated for stuff and it does a lot of money, then that’s going to change, and then someone’s going to be saying, ‘Oh, fucking Liotta, of course, you know, why not me?’ And then they’ll hate me. I can’t wait to be hated. Because that just means success is kicking in.”

Ray Liotta’s the kind of actor you want to root for; for too long he’s been the underdog, the punch line, the superstar rendered character actor by studios and filmmakers who have no idea how to harness his force. He’s failed nobly (Article 99, a dramedy set in a VA hospital, ranks high on the list of great Liotta performances seen only by viewers of late-night cable), turned down the chance to cash in on cultural phenomena (he refused a part on The Sopranos, because “why the fuck would I want to be in The Sopranos after having done GoodFellas?”) and gone out of his way to prove himself adept at being goofy when everyone else wants him to play crazy. It was his idea to play himself on NBC’s Just Shoot Me, in an episode in which Liotta is too much in love with Christmas. He did it once more, and he’d do it again and again and again just to prove to a studio boss or a director or just other actors that he’s capable of doing anything. The veteran will still try out for a spot on the team. All the bastards have to do is ask.

“It’s based on the ball and the bat that they have: If you make money, you’re going to get the better parts or whatnot,” he says. “It’s kind of like a ‘Fuck you, I’ll show you. You don’t give me this? You don’t think I can be funny?’ Monthly, that stuff comes along and you do it. If it’s a $30 or $40 million movie and it’s the lead, I’m probably not going to get it. But in a sense, it’s kind of like, you know, ‘I’ll show you,’ I still have that, I still have as much passion and as much ‘fuck you’ to them as I always have. But right now, it’s like that whole Pia Zadora thing: As long as they’re talking about you, that’s what’s good. There will be an interest.”

“You know, you remember Pia Zadora.”

Sure. Uh, weren’t you in a Pia Zadora film?

“Yeah, yeah,” he says, flashing that crazy grin. “Raped her with a hose. Somebody had to.”