Uzazi Village grows into a new home as it continues to serve women, babies and families in the urban core 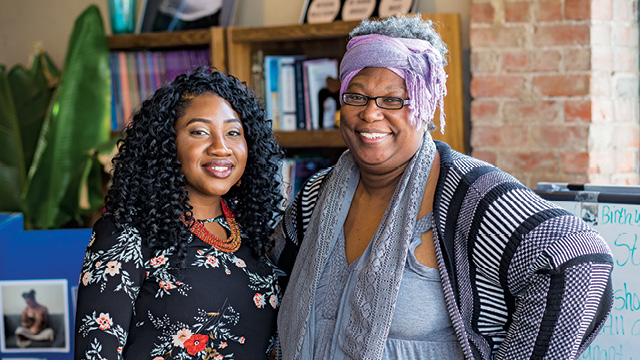 Zara Bever, pregnant with her second child, wanted to avoid another cesarean section like the one she’d had at a Northland hospital when her first child was born. She had been confined to a bed then, prohibited from walking around. What should have been a time of elation had left her second-guessing her doctor.

“If I had let my body labor, it would have been all right,” she says. “I wasn’t given to the instinct from my body to do that and be allowed what my body needed to do.”

This time, Bever hoped to have a vaginal birth — which, for a mother with her previous experience, is called a VBAC (vaginal birth after cesarean).

She understood that she’d probably meet some resistance. It’s common for doctors to advise women who have already had a child to plan on a C-section for a subsequent pregnancy. The idea is to limit certain risks and potential complications (and to minimize liability for the doctor and the hospital).

Bever, who has bachelor’s and master’s degrees from Missouri Western State University, had done her own research and was comfortable choosing a VBAC. But she says what she encountered from some medical professionals she saw at first was a blunt insistence that she go with the C-section.

“Every time that I went there, I left there crying,” she says. “I just felt that my birth wasn’t welcome.”

Bever is Muslim, and she says a cultural divide may also have played a role in what she says was a harsh interaction with staff at her doctor’s office.

“I went there because my primary doctor was there,” she says. “I don’t know if it was a personal bias. But I had grown up in the neighborhood and I had a master’s. Biases do affect the way we interact with others. My pregnancy was a time for me to enjoy. It was what we prayed and were excited for. I wanted and deserved to enjoy every moment, as I believe every mother should.”

So she talked with her family and set out to find a place that did want her birth. Her search led her to Uzazi Village. 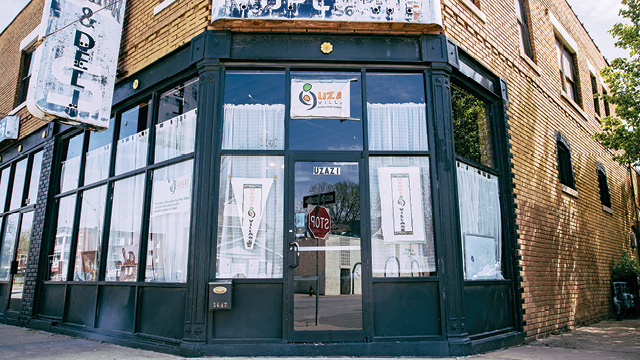 “We serve primarily the urban cores, and it is primarily African-American women — the women who reside in high-infant-mortality areas like the Troost corridor,” says Sherry Payne. She is sitting at her desk inside Uzazi Village, talking to a group of nursing students from Kansas City, Kansas, Community College. They huddle close to Payne, asking questions about how and why she started Uzazi.

Payne was a labor and delivery nurse, and in her hospital work she had seen what she calls a “two-tier health system” — one that treats patients of color differently than it does white patients. “There is a systemic bias in health care,” she tells the students. “It might be access. And then, when we get access, the quality of care might be different.”

In a 2015 committee opinion, the American College of Obstetricians and Gynecologists notes that “significant racial and ethnic disparities persist in women’s health and health care.” While socioeconomic status was considered in some cases, “factors at the patient, practitioner, and health care system levels contribute to existing and evolving disparities in women’s health outcomes,” the report reads.

The Missouri Health Department reported in 2015 that the infant death rate of African-Americans in the state was 12.7 per 1,000 live births — nearly 2.4 times the white infant death rate (5.4 per 1,000 live births). This was the same as it had been a decade before. Statistics from the Kansas City Health Department indicate that a similar statistical disparity exists here.

“The healthcare system thinks it is above that [racism], but hospitals are just businesses,” she tells the students. “Altruism is not the motivation. I was naive. I thought that working as a nurse there I could have a positive impact. I burned out quickly. Practically no one wants to hear that the system is the problem.”

In December 2011, Payne — who has a bachelor’s degree in nursing and a master’s degree in nursing education and is on the board of the National Association for Professional and Peer Lactation Supporters of Color — was part of a discussion at the Kansas City Health Department about maternal health. When the idea of a place dedicated to improving birthing outcomes was raised, she helped recruit a few other people with the same concerns. They met on Saturdays to hammer out details on what Uzazi would be. Within a few months, they were able to open the first iteration of the facility.

“This is the place that is the intersection of health care and social justice” Payne says of Uzazi, which today is a 501(c)3 funded through a combination of grants, donations and fees, many paid through insurance companies. Healthcare workers pay to take classes here, and the center also offers perinatal doula classes, birthing classes, lactation consulting and advice on bonding techniques.

“It’s a three-pronged approach to solve the problems of racial-biased maternity care and bad outcomes and the high rate of C-sections among black women,” Payne says. First, she tells the students, Uzazi means to reach women and families, educating them about their options and how to ask for and receive the best perinatal care. The second prong involves communicating and collaborating with healthcare providers. “My goal is to influence the influencers,” she says.

The third part of Uzazi’s mission is arguably its most ambitious: bringing successful candidates of color to the healthcare field — as doulas, as nurses, as doctors. “We offer training and classes that help those candidates of color who want to become part of that group,”

The idea is for Uzazi to provide clinical services and a midwifery school (the latter, Payne says, as early as this fall, depending on state accreditation) as well as a prenatal clinic and a birth center.

“I didn’t know much about having a doula, but I came here and told them that I just wanted to have a VBAC,” Bever says, recalling her first visit to Uzazi. “They let me know that I wasn’t crazy and that I could be an active participant in the birthing process.”

When Bever’s second child was past due, she says, Payne met her when she was induced to start labor. “She stayed with me the whole time, and I thought: Who in their right mind would stay with someone who they hardly knew?”

Bever is sitting at a table inside Uzazi, holding her 2-year-old daughter on her lap while her 7-month-old son lies across her opposite arm with his head up, nursing. She tells me that, when she was pregnant with her third child, she headed to Uzazi early on. Now, on this Saturday morning, she has returned again — to study toward becoming a sister doula herself.

Kellye McCrary, who was Bever’s doula, comes into the room to pick up some supplies for a client she’s going to visit at a hospital. McCrary and Bever smile at each other across the room and then move together to share a hug.

“I’ve lived in zip codes where infant mortality rates are the highest,” McCrary tells me. She’d worked administrative jobs in the past and has sometimes been self-employed. Now, trained by Uzazi — which she joined when someone she was talking with at a local YMCA told her about the place — she’s a sister doula. Her job, she says, is to provide “emotional and informative support to women who need it and may be high risk.” she adds, “We help the women advocate for themselves.”

“My husband became an active participant,” Bever says. “They showed him how to rub my back. They invited him to the Uzazi childbirth class. They also showed him different techniques such as robozo, safe and effective counter pressure and massage. They encouraged him to be my birth partner, so he did a lot of holding, hugging, sway dancing, how to place the peanut and the birth ball, and pep-talking to help me through contractions. They also made sure that he was a active participant in the birth plan so when I was too tired he could voice how we wanted immediate skin-to-skin and breastfeeding. How, after the delayed cord clamping, we wanted him to be the one to cut the cord.”

Chrans invites McCrary to tell the students something about being a doula.

“It’s such a rewarding thing to be able to help moms,” McCrary says. “I just get emotional every time that I see that baby come into the world and hear I don’t know what I would have done without you.” She turns to Bever and goes on: “I’m proud that Zara is the first sister doula client that is now becoming a sister doula herself.”

As the class continues, with Payne joining the discussion, talk turns to how to know whether babies are getting the amount of breastmilk they need. McCrary tells the students it’s important to let women make their own decisions rather than telling them what to do. “You have to support this mom where she is,” she says. “You can’t put your goals on her. One thing we tell community health workers is that your goals don’t matter. You have to step back and let them [the mothers] lead the way. That is a really hard thing to do.”

“Uzazi reminds me of how the Senegalese culture and community in general — that of Senegalese communities still in Africa, and the immigrant community here,” Bever tells me later. I’d asked her why she wants to do what Payne and McCrary do. In her mother’s culture, she says, “it is customary for the community members to support new babies and their families.” That’s what she wants to do here, she says. 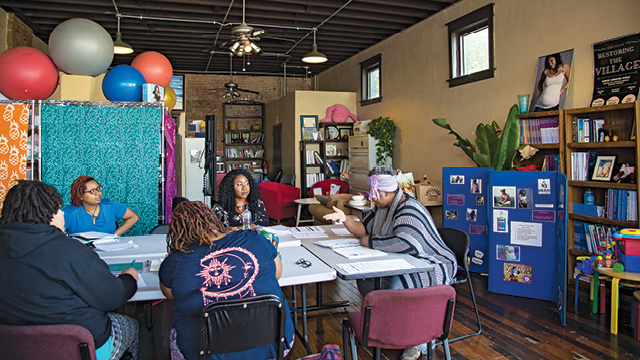 Evening sun warms the front room of Uzazi on a Monday evening in April as future community health workers finish discussing their final chapters around a table at Uzazi. The women have studied since January and are here to talk with Payne — who has recently changed her name to Hakima Tafunzi Payne — about the group’s final project, an early summer workshop for local teenagers and women. (One part of the workshop: a presentation titled “Debunk the Funk,” about the harm of synthetic materials and chemicals in women’s hygiene and skin-care products.)

That and other events will take place at Uzazi’s new headquarters, 4232 Troost. A Gofundme campaign has been collecting donations to help fund the first six months’ rent, with the move set to take place in late July. Payne believes that this is the right spot to advance her three-pronged vision.

Payne arrives, and the women begin their discussion. At one point, she asks the class: “Some of you have roles in the community or had roles where you were doing community organizing — how would you define it? How else can you define community?”

A few students answer. Then Payne turns the question on herself. She tells the women about Uzazi’s mission — about the women, the babies, the, families, about training doulas and teaching health workers. There’s no easy summary for all of that, for the statistics and for the obstacles confronting women with and without health insurance. So Payne just says, “Part of my job is to make sure that the voice of the community is heard.”