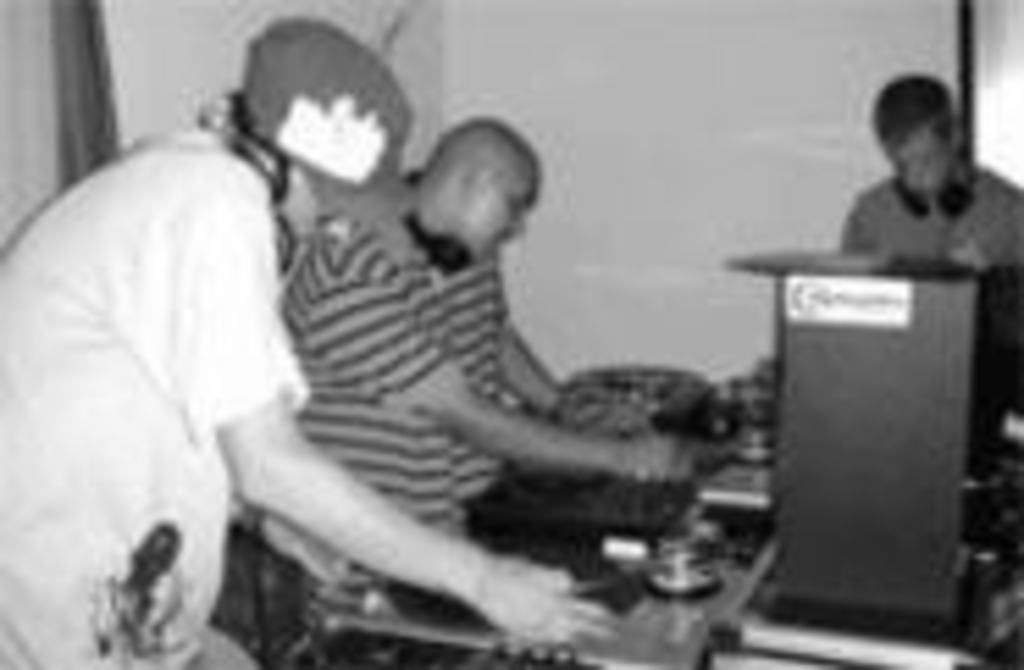 To attend a lot of DJ-centric events is to realize the phenomenon of “DJ face.” Some DJs’ mouths hang open, as if they’re astonished at their own abilities. Some tuck their tongues into the sides of their mouths. Some stare blankly ahead, listening to their handiwork.

DJ Sku‘s face is pure elation, but you might miss it if you’re too busy watching his hands make chop suey of some poor, defenseless records. At the third anniversary party for the skate shop Lovely, held at Jilly’s downtown, Sku, whose real name is Corey Aguilar, stood in the same spot where so many other DJs have faded into background noise, and he stole the entire room’s attention.

Aguilar, then, was a natural host for a spinning extravaganza in Lawrence. Once every couple of months, Aguilar invites all the DJs he knows, and they invite all the DJs they know, and everyone converges on a heap of turntables, speaker wires and boxes of favorite sounds. Vinyl nerds drive from as far as Emporia and Topeka to meet Aguilar’s challenge and throw down some wax.

“My goal is to get those DJs out there who are hidden away in their bedrooms, get them out here to play,” Aguilar says. “Because it’s always those guys who come in and blow everyone’s mind, because they’ve been practicing for eight hours a day.”

That’s pretty much how Skratch Track went a couple of Fridays ago in Lawrence. It was Aguilar’s fourth such event, this time generously hosted by a handful of newly graduated college girls at their place near the University of Kansas campus. They opened up their house and two kegs of beer for what turned out to be one of the live-est hip-hop shows ever to go down in someone’s living room. The basic structure of the event worked nicely: Someone would throw down an instrumental track on the first turntable, then three or four DJs would step up to perform scratch solos over the music with records of samples and sounds.

Around midnight, the session on the turntables had evolved into full-scale beatmaking — all the components of a song, from the drums to the melody, were constructed from the turntables and the DJ’s fingertips — and the party spilled out the front and back doors. DJs with names like Flotilla, Oscar Slugworth, Johnny Quest, Papercut, Barnyard Barbarian, Boogie and Spinstyles traded scratching over songs underground and mainstream — the Hieroglyphics, One Be Lo, Mos Def, Ludacris and Bjork.

Finally, around three in the morning, someone found a microphone, and two KC hip hop MCs, Reach and Approach, battled it out. The college partiers realized that inside was the place to be, despite the heat, and threw their hands in the air.