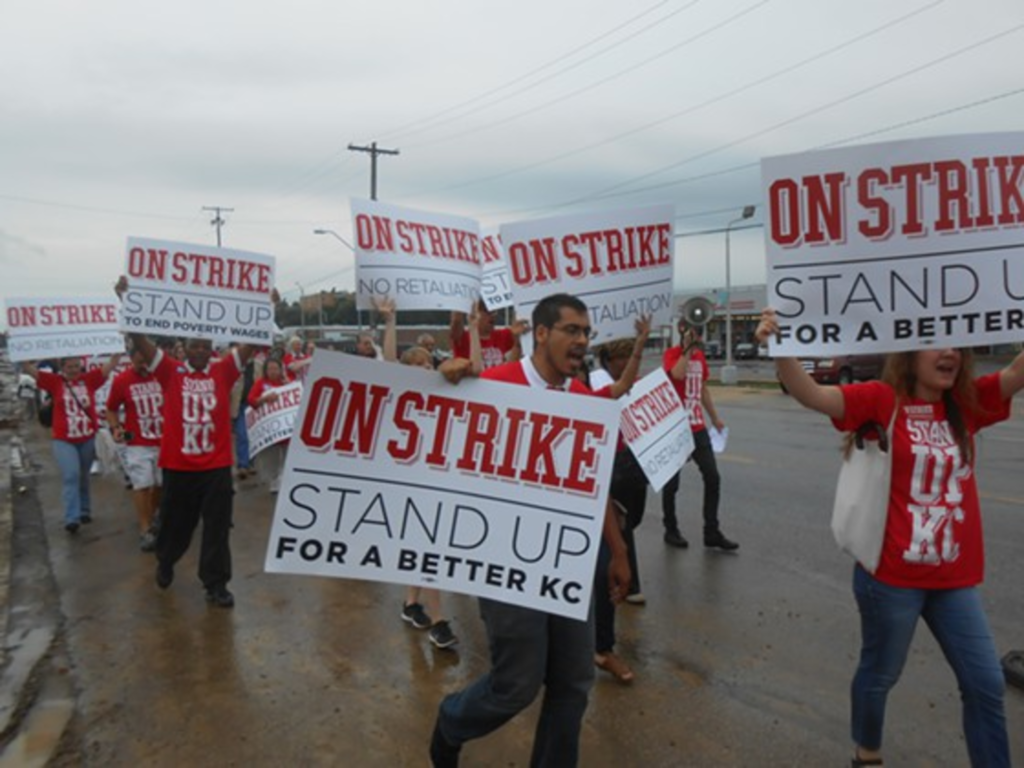 Update: Gina Chiala, spokesperson for Stand Up KC, the group spearheading the two-day employee strike in dozens of fast-food restaurants in the Kansas City area (there are no planned walkouts in Kansas, Chiala said) can’t give even a rough estimate of how many local restaurant employees are scheduled to walk off their jobs tomorrow but said that “every major fast-food chain will be represented.” The strike, she said, “is intended to inspire other local food-industry workers to fight for a $15 minimum wage and the right to unionize.” This blog has been updated to include additional information from organizers of the strike.

There wasn’t much lunchtime drive-through business at the Burger King restaurant at 1102 East 47th Street. The parking lot and the adjacent stretch of Troost were full: three police cars, at least four dozen protesters in red shirts printed with “Stand Up KC,” camera crews and reporters from most of the local TV stations, a few print reporters, and U.S. Rep. Emanuel Cleaver II.

“My father was a restaurant worker who made 25 cents an hour in 1938,” he told the enthusiastic crowd. “Minimum wage has only risen $7 in 74 years.”

Inside the Burger King, manager Nia Cline and a skeleton crew of assistant managers were selling burgers and sodas to the dozen or so customers who seemed fascinated by the commotion outside the restaurant.

“Only one worker didn’t show up today,” Cline told me, “because we knew what was coming and didn’t have any other staff scheduled for today. We were open for business this morning, and things are going just fine.”