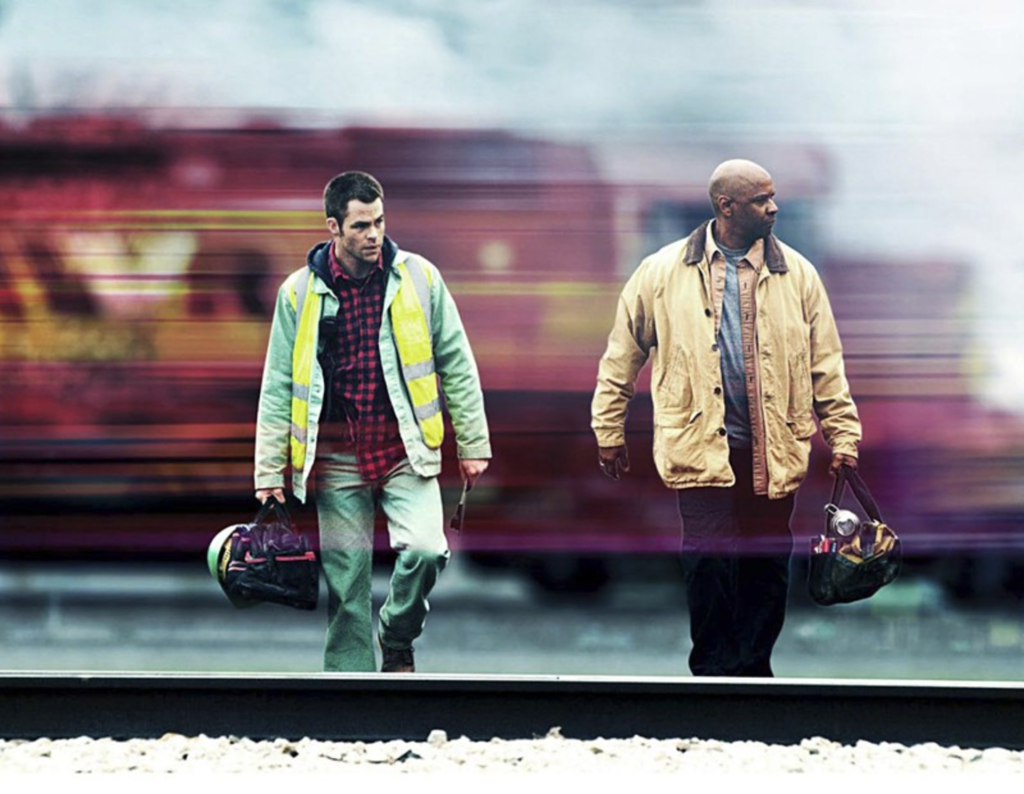 It’s based on actual 2001 events in Ohio that caused an unmanned freight train, laden with toxic waste, to go haywire, but Unstoppable could just as well be set in the shining sun of Ronald Reagan’s 1980s.

As the driverless locomotive begins gathering speed across rural Pennsylvania, it crosses through blue-collar hamlets full of hardworking men and women, loyal dogs and fresh-cut grass. And from those plain-spoken, beer-drinking, family-loving folk come two heroic railway workers who break the rules and pursue that runaway train with their own locomotive, while the TV news choppers whirl admiringly overhead.

The two heroes: Will (Chris Pine) is young and white, while the other, Frank (Denzel Washington) is mature and black. Will is unhappily separated from his wife and son; Frank is a widower forced into early retirement by his employer of 28 years. But still they go after the errant train because it’s the right thing to do. They don’t need elitists or big government or special interests to provide orders or advice. Enough with this talk of physics and math and timetables — let’s go get that train!

Oh, do you need to be told that this is a
Tony Scott film? Last year, the hectic-action auteur did subways, in his The Taking of
Pelham 1 2 3 remake; this year, he’s aboveground.

Train movies are as old as the movies themselves, and it’s almost impossible to make a boring railroad flick. We expect — and Scott duly delivers — scenes of trains smashing through cars, trains smacking into other trains, and people trying to jump aboard moving trains from helicopters and trucks and other moving trains. When a trailer full of thoroughbreds is stalled on the tracks and has to be pulled out of harm’s way, only then does the otherwise obvious Unstoppable miss an obvious rail-pursuit combination: Denzel Washington on a horse.

Frank does eventually end up on top of the train, leaping manfully from one boxcar to the next, just as we expect. And the rest of the story (written by Mark Bomback) proceeds just as we expect, too. It’s like a mash-up of classic commercials for Ford pickup trucks, Bud Light and Hooters (where, God help us, Frank’s daughters are working their way through college).

Frank’s credo: “If ya gonna do something, do it right.” Will’s motivation is to keep the train from derailing in his hometown, where his estranged wife and child lie sleeping next to a fuel depot. And, yes, because you ask: There’s a train full of schoolchildren on the same track, headed right toward the runaway train. (Still, I was disappointed that Scott didn’t also add a caboose full of adorable puppies. Michael Bay would’ve added puppies.)

Pine, away from the helm of the USS Enterprise, adequately conveys a sense of tetchy insecurity as the junior partner in the chase. Oscars on the mantel, Washington coasts comfortably in his role. Frank just smiles at his inept railroad bosses and gets the job done.

And apart from one sympathetic manager (Rosario Dawson), the suits are corporate weasels who — no surprise — value profits over people. Still, Scott doesn’t exactly take them to task: A CEO is briefly glimpsed on a golf course, muttering into a cell phone about a potential $100 million loss and diminished share prices, but he’s never seen again, never held accountable.

In Unstoppable, cheerful can-do populists save the day, but the movie ultimately blames the little guy for the mishap. A preview audience hoorayed at the postscript stating that the culprit was fired and today works in fast food. Never mind that a culture of cost cutting has contributed to several rail-freight accidents in the last two decades — including the near disaster that inspired this movie. A Pennsylvania toxic-waste derailment occurred six months before that event, then again six months later in New York, during which time CSX Corp. reported record profits, and its CEO went to work in the regulation-averse Bush administration.

But that’s a different movie.