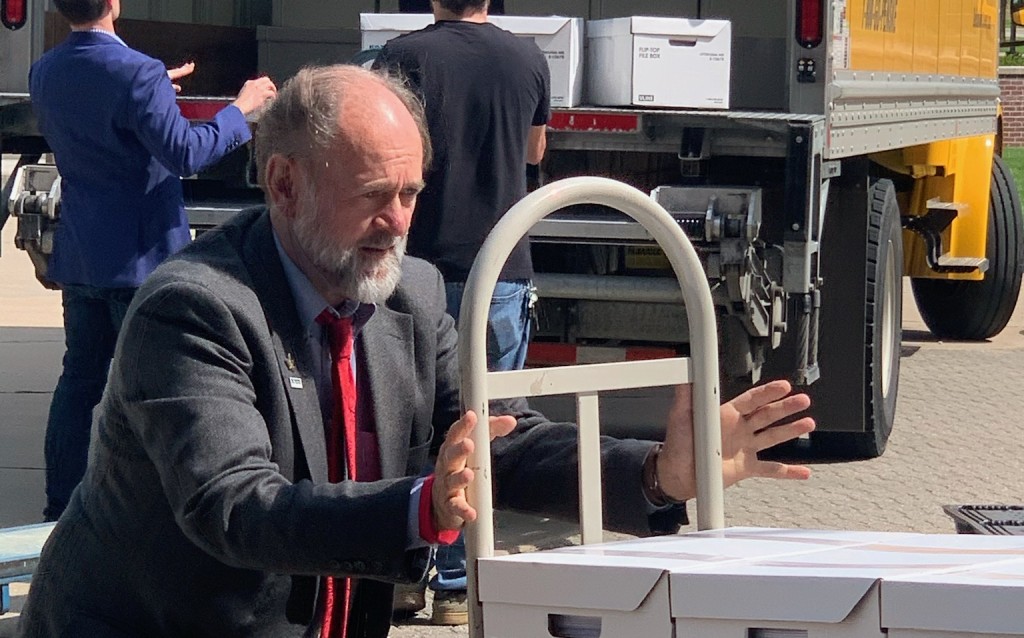 Dan Viets, chairman of the Legal Missouri 2022 advisory board, pushes boxes of petitions to legalize marijuana as they are submitted in May to the Secretary of State’s office. // Photo courtesy of Scott Charton / Better Elections Missouri

An initiative to legalize recreational marijuana use in Missouri will need help if it is going to be on the November ballot.

Reports every county in the state, delivered to Secretary of State John Ashcroft’s office, show the petition is short of its goal in two of the six congressional districts needed to qualify for the ballot.

The same reports show that a proposal to bring ranked-choice voting to Missouri failed to obtain the necessary signatures in any congressional district.

The figures are unofficial and subject to amendment until the final Aug. 9 deadline for Ashcroft to determine whether the campaign succeeded or not, spokesman Madison Walker wrote in an email to The Independent.

Roughly 400,000 signatures were submitted for the petition to legalize adult use of marijuana and automatically expunge most nonviolent past cannabis offenses, he said.

“As we continue to see more signature counts submitted by counties, it’s become crystal clear that we have more than enough signatures to qualify our citizens’ initiative for the November general election ballot,” Payne said. “The Legal Missouri 2022 campaign continues to work to ensure that every valid voter signature is counted properly, and is excited that Missouri voters will soon have their opportunity to decide.”

The Legal Missouri initiative would expand the current medical marijuana businesses program by allowing existing licensees to serve both medical and non-medical purchasers. There would be an additional 144 licenses for what will be known as “microbusiness facilities,” with six dispensaries and 12 wholesale facilities in each congressional district. It would also require expungement of marijuana offenses from criminal records.

Supporters of Legal Missouri lobbied heavily against a bill introduced in the Missouri House that would have legalized marijuana use and set up a fairly simple licensing system similar to that used to license liquor businesses.

“We have 16,000 liquor licenses in this state. I don’t see why we should be treating cannabis any differently,” said state Rep. Ron Hicks, R-Defiance and sponsor of the legislation.

Told that the initiative is currently short of the needed signatures, Hicks said it was “wonderful news.”

Hicks is leaving the Missouri House due to term limits, but he urged lawmakers to pass a simple legalization bill in the coming year. License limits that are artificially low hurt small entrepreneurs, especially minority businesses, he said.

“If we do it the right way, through the legislature, the state will be better off,” Hicks said.

Both the Legal Missouri and Better Elections initiatives were proposed constitutional amendments, meaning they needed signatures from registered voters equal to 8% of the vote from the 2020 gubernatorial election in each of six of the state’s eight congressional districts.

Legal Missouri succeeded in the 1st, 2nd, 3rd and 5th districts. Of the 379,336 signatures submitted for those districts, 52.1% were deemed valid.

Signatures are checked by local county clerks and election boards.