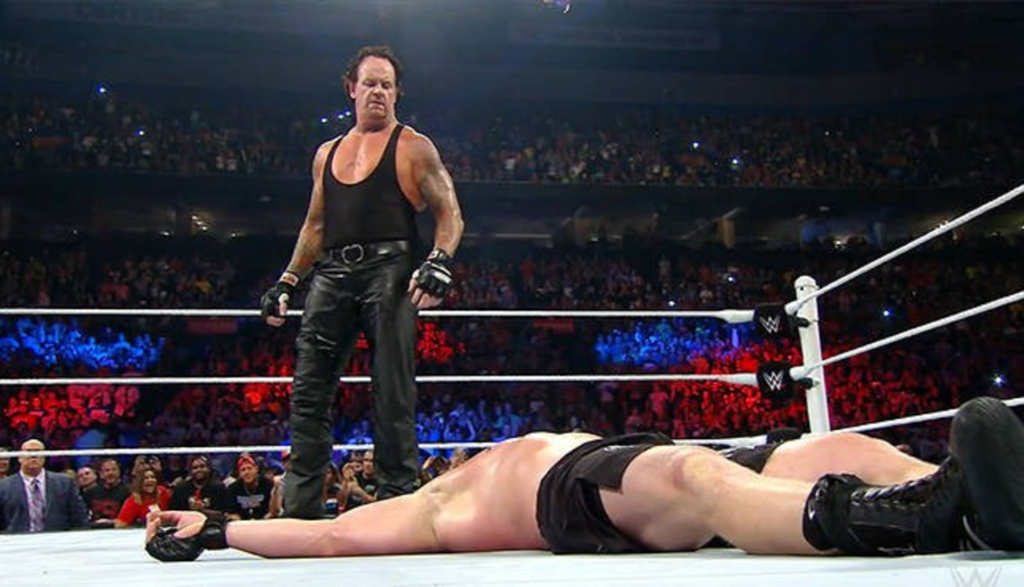 The Undertaker returned to WWE at last night’s Battleground pay-per-view, to kick Brock Lesnar in the crotch and Tombstone pile-drive him — twice! — in the middle of Lesnar’s match against WWE World Champion Seth Rollins. That leads us to tonight’s WWE Raw show at the Sprint Center.

Lesnar has been advertised as appearing in Kansas City (so look for Suplex City: Kansas City shirts at the merch tables), and Undertaker is likely to also make his intentions known, which could be revenge for the Beast Incarnate breaking Undertaker’s WrestleMania undefeated streak or payback for snapping the leg of Kane, the Phenom’s storyline brother. Either way, expect a showdown at SummerSlam in Brooklyn.

Also, we’ll get the rest of the fallout from the Battleground show in St. Louis. John Cena retained the United States Championship against upstart Kevin Owens, giving the Champ a 2-1 advantage in their series of matches. Where does Cena go from here? How about Owens? Could Owens answer Cena’s US Open Challenge tonight? Let’s hope so.

Before last night’s match, Owens smashed a Cena painting by Kansas City’s own Rob Schamberger, who will be doing a live painting in front of the Sprint Center.

Also, the women’s wrestling revolution continues with Charlotte (the daughter of the legendary Ric Flair), Becky Lynch and Sasha Banks moving up to the main roster from WWE’s developmental territory to challenge the Bella twins and Alicia Fox. And the Prime Time Players and Mark Henry will hopefully make it to Kansas City after being pulled over on the way out of St. Louis. Why does this keep happening? Oh, man.

Thank Goodness for Clean Records… @fredarren almost Got me and @themarkhenry Locked up!! #DamnShame #UsFree

The show starts at 6:30 p.m. and then goes live on the USA Network at 7 p.m. Tickets are still available. Get them here.