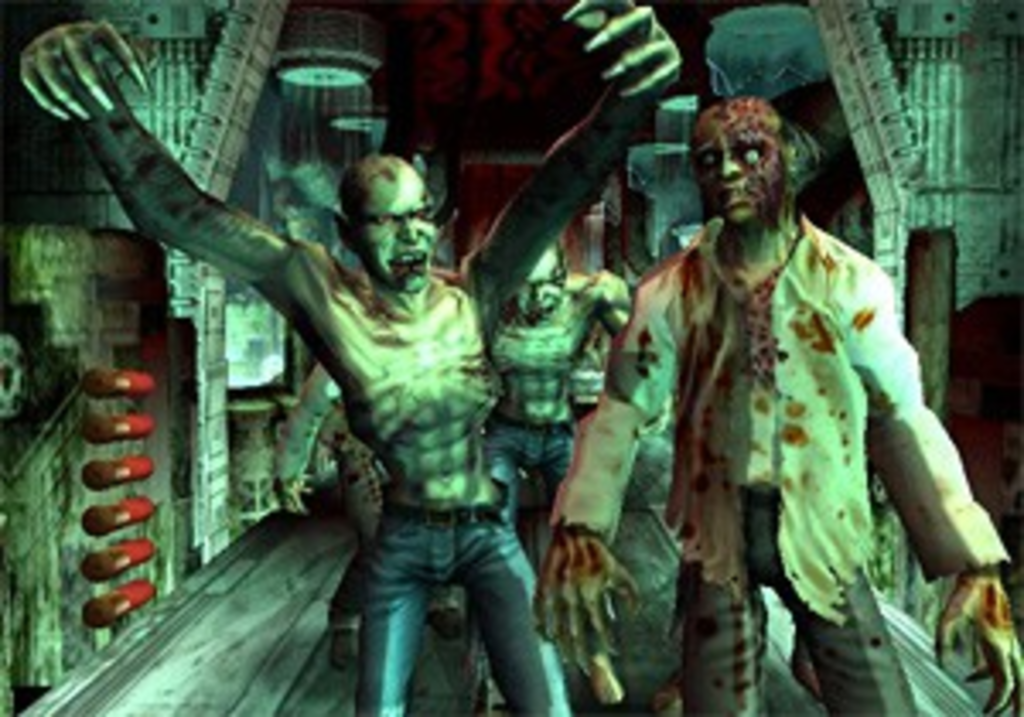 If you don’t remember a game called The Typing of the Dead, you’re not alone.

Released on the failed Sega Dreamcast system, this gory, hilariously titled arcade-style shooter was in many ways exactly like its popular counterpart, The House of the Dead. But instead of aiming a gun at the screen, players fired by typing non sequiturs — “Smeg Head,” “Potato Man,” etc. — on the keyboard. When entered quickly and accurately, the corresponding letters blasted bloodthirsty corpses with a kind of alphabet ammunition not seen since the bloody Sesame Street riot of ’82.

Yes, Typing of the Dead was gimmicky and laughable, but it also turned out to be much more: a unique, surprisingly enjoyable game in a zombified industry plagued with brainless, carbon-copy titles. No wonder it still enjoys cult status as well as its share of critical praise.

This isn’t necessarily an indictment of the House of the Dead series; retro arcade shooter games were simply made to be adapted for the Wii, and nostalgic fans of the genre will love this inexpensive compilation, at least for a while. Time hasn’t been kind to House of the Dead’s graphics (which are still scary, just no longer in the intended way), but it’s still the same mindless shooting-gallery entertainment you’d expect from the quarter-draining classic.

Still, playing House of the Dead 2 & 3 again, this time on a $300 next-gen system, leads to an inescapable conclusion: If the Wii had been readily available to everyone who wanted one back in 2006, it would have already gone the way of the Dreamcast because of its perpetual dry spell of worthy games. Two years later, you can still count Wii’s must-buy offerings on one hand; playing ancient shooters between long-awaited Nintendo blockbusters like Super Smash Bros. Brawl (itself a retread of a 1999 game) just ain’t cuttin’ it anymore. Where we should be getting games that take advantage of the Wii’s brilliant technology, we’re instead force-fed bargain-bin clutter.

Perhaps there is hope on the horizon. September brings a promising new game called De Blob, starring a mischievous paint blob who’s charged with restoring color to a black-and-white village — kinda like Pleasantville with anthropomorphic art supplies. But that same month also marks the debut of other Wii tripe, such as Build-a-Bear Workshop. Yep, a game based on the plush taxidermy chain of the same name.

So if you too have exhausted all other Wii options, maybe it’s time to saddle up and relive the ’90s with House of the Dead 2 & 3. Better yet, relive the ’80s with more of Nintendo’s Virtual Console retreads.

Or you could just drop $30 on an old Sega Dreamcast and a dusty copy of Typing of the Dead, and spare yourself the heartache.