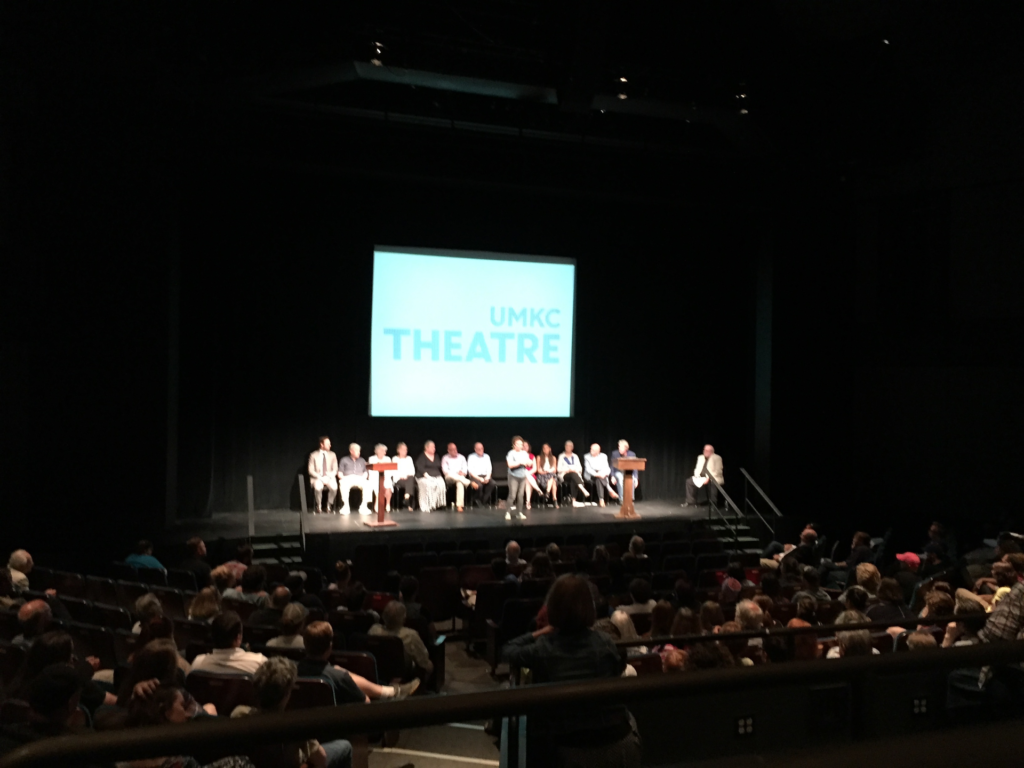 It’s short-sighted, but it’s a truism: When the economic going gets tough, the arts get going. And so, with budget problems plaguing the University of Missouri system, the school is scaling back the UMKC Theatre program, resulting in the layoff of four nontenured instructors, a loss of programming, fewer graduate students, and the elimination of productions.

UMKC Theatre is a crown jewel in the area, not only a point of pride but also a nationally recognized vehicle for future theater artists. This point was made repeatedly at UMKC Theatre’s public town hall Sunday, at the campus’ Spencer Theatre in the Olson Performing Arts Center. A series of speakers attested to the program’s history and reach, as did a video shown before the event’s start, with clips of theater professionals and academics with close ties to, or knowledge of, the UMKC program, and former students from different areas of the theater arts who are now working in their fields.

Spencer Theatre, which seats a little more than 500 people, was close to three-quarters full. And attendees, some carrying placards, were roused.

Acting professor Theodore Swetz moderated the town hall and noted that the theater department’s ideas for reducing the budget while maintaining quality had been disregarded. He said that the repercussions of Gov. Eric Greitens’ cuts are so severe that they will destroy the theater program.

This point was driven home throughout several short but spirited presentations.

First to speak was Richard C. Brown, an actor who attended UMKC in 1963. He said the public “must demand that the MFA program continues here.” Felicia Londré, curators’ distinguished professor of theater, joined the faculty in 1978, before UMKC Theatre had its MFA program (which started in 1981). Londré said the program is highly regarded, yes, but also the only one offered in Missouri. “The survivor adapts to change,” she said, “and we’ve always done that. But we’re not just survivors but leaders in the field.”

Karen Vorst, a professor of economics and former dean of the College of Arts and Sciences, said only in recent years has funding come from the College of Arts and Sciences; theater used to be funded from the highest level. “A shrinking budget is not a sustainable model. Cuts will be catastrophic.” And KC Rep artistic director Eric Rosen said it was time to unite against external threats. “A threat to the department is a threat to us all.”

For students, the MFA program is a big part of this city’s appeal. UMKC Theatre has long prepared theater artists for work throughout the country, even as it has also remained integral to the local theater community. Sidonie Garrett, executive artistic director of the Heart of America Shakespeare Festival, emphasized that UMKC faculty, designers and actors have been a vital part of the festival every year. “Theater is about collaboration,” she said, adding that when the festival itself had financial concerns, the community stepped up.

Building on that idea, John Rensenhouse, core artistic member of Kansas City Actors Theatre, said KCAT would not exist without the resources and people of UMKC Theatre. He received his MFA at an urban school in Milwaukee, Wisconsin, a program later eliminated by budget cuts. And now, he said, “We don’t hear about Milwaukee Repertory.”

Cynthia Levin, producing artistic director of the Unicorn Theatre, said there weren’t many theaters in KC other than the Missouri Rep when she arrived here a little more than 40 years ago. The Unicorn was started by three UMKC Theatre graduates, and the Unicorn has had more than a dozen collaborations with UMKC. There wouldn’t be this level of artistry in KC, she said, without UMKC. Jeff Church, producing artistic director of the Coterie, said the Coterie’s co-productions with UMKC actors have been ongoing since 1992. The reduction of so many at once, he said, would wreak havoc.

Nick Gehlfuss, who stars on the TV show Chicago Med, spoke of his experiences in the UMKC MFA program and its lasting effect on him as an actor and a person. He wouldn’t have attended, he said, without a scholarship. Becoming a better actor, he said, made him a better person. “Without this program,” he said, “people will lose the ability to follow their dreams.”

I’ve attended many student productions, which are high-quality, exposing the public to the likes of Henrik Ibsen, Bertolt Brecht, Tennessee Williams and Shakespeare, among others, as well as original works such as Eat This: KC Chew on the Politics of Food, written from community interviews and directed by Stephanie Roberts, associate professor of physical theater; Freedom Rider and Kansas City Swing, co-written and directed by visiting assistant professor of theater Ricardo Khan; and many co-productions with area theaters.

Three of the faculty facing layoffs spoke of their experiences in the program. Khan said, “When we talk about community, we talk about people,” and the ramifications of the cuts “affect not just KC but the entire country.” From New Jersey, Khan spoke of the effect theater had on him as a child growing up in Camden, and said he’d seen the impact of his previous collaborations on the community as well as on the students who have been involved with them. Another collaboration, the work-in-progress Freedom Summer, will now not be produced this coming year. “Missouri deserves better,” he said. Shane Rowse, assistant professor of lighting technology, and Chaz Bell, assistant professor of technical theater, spoke movingly of their roles as teachers and mentors.

Following the speakers, Tom Mardikes, chairman of UMKC Theatre and professor of sound design, opened the forum to questions while noting that the program has been understaffed for five years after taking a huge budget hit; this current cut, he said, is a tipping point.

Unfortunately, Mardikes could offer no plan of action for the community summoned to the event. Rousing speeches and moving personal stories at the town hall were as much as the theater department seemed to have planned, other than using media and social media to spread the message. Who are the people in power who can be contacted? one attendee asked. What can the community do? Mardikes’ answer: “We’re theater professors, not community activists.” The chancellor and dean were in attendance to hear the concerns, he said, and students want to take action, so UMKC Theatre will be announcing its next steps.

The time is now, not later.