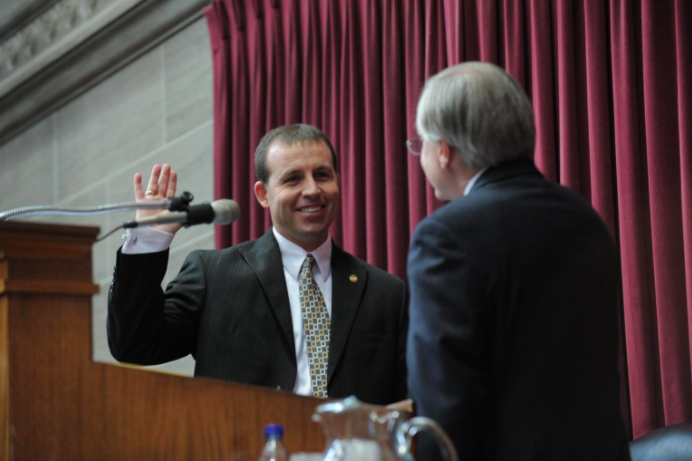 Steve Tilley was sworn in as Missouri House Speaker in 2011. He resigned in 2012 to become a lobbyist and political consultant. // Courtesy of Missouri House Communications

In late February, University of Missouri Curator David Steelman raised objections that one of the system’s lobbyists — former House Speaker Steve Tilley — was using his connections to the university to seek business for other clients.

Steelman called the arrangement “an obvious conflict,” and openly worried that if he didn’t “play ball” he would lose his seat on the nine-member board that governs the university system.

Steelman laid out his concerns in a Feb. 24 email to UM System President Mun Choi obtained by The Independent under Sunshine Law requests submitted to each of the nine curators.

A well-connected Republican attorney from Rolla who is the husband of Sarah Steelman, commissioner of the Office of Administration since 2017, Steelman is the longest-serving curator. His term is expired and he remains on the board until a replacement is confirmed by the Missouri Senate.

Tilley, who both lobbies state government and provides campaign consulting services, has been paid $5,000 a month since February 2019 to lobby for the University of Missouri System.

Along with Holloway, Parson on March 18 nominated former state Republican Party Chairman Todd Graves, a Kansas City attorney, to a seat on the board. The appointment is generating controversy, with Democrats objecting to Graves partisanship and some Republicans objecting to his actions as party chairman.

Two other curators are serving in expired terms but Parson has not appointed replacements.

Tilley has been working behind the scenes to get Graves confirmed, setting up at least one meeting last week between Graves and a state senator.

The Senate Gubernatorial Appointments Committee will hold a hearing at noon Wednesday on Graves’ nomination. No date has been set for a hearing on Holloway’s appointment.

The email that prompted Steelman to write to Choi was dated Feb. 22. Tilley forwarded an email from Tremco, an Ohio-based roofing and construction company that is one of Tilley’s lobbying clients. The company said it was “approved and ready to go” on projects funded by federal coronavirus aid under the March 2020 CARES Act.

The email subject line listed three national purchasing cooperatives that act as a clearinghouse for public agencies to piggyback on other projects. That meant the company could be hired without a separate bidding process, the email stated.

“Can we talk on this,” Tilley wrote to Steelman, who put him off by stating that another curator was in charge of the board’s finance committee.

“This is not the first time Steve Tilley has approached me on behalf of someone who wanted to sell a product or service to the University,” Steelman wrote. “I have always simply deflected as I did this email because I saw no reason to stir anything up.”

“Also, since I am aware that the Governor’s office has made inquiries as to a new curator to replace me, I also take this, perhaps unfairly, as a signal that if I want to be reappointed I need to learn to play ball,” Steelman wrote. “I want to make it clear that I do not know that, but am concerned that the same signal may be sent to new curator appointments and perhaps the university should step up its education on conflicts of  interest.”

Steelman declined a request for an interview to discuss the emails.

Tilley did not respond to text messages seeking comment.

Parson’s office did not respond to an email asking whether Tilley has played a role in recommending appointments to the Board of Curators.

In a statement provided by email, the university stated that Tremco has not been hired for any university projects awarded this year.

“No matter how vendors come to the attention of the university, we have systems in place to ensure that no one person or company receives preferential treatment,” the statement read.

Tilley does not have a direct contract with the university. He is a subcontractor, paid through the contract between the university and Andy Blunt of Husch Blackwell Strategies that costs $252,000 a year.

The university also employs a staff lobbyist at a salary of about $120,000 a year.

The university was one of dozens of new clients Tilley acquired in the months after Parson became governor following the resignation of Gov. Eric Greitens in June 2018. Before Parson took over as governor, Tilley had 25 lobbying clients. His client list currently stands at 74.

Tilley was hired to help with the university’s overall effort to make its needs known in Jefferson City, a spokesman for the university said in an email to The Independent.

“As we receive more than $400 million from the state and have a presence in every county of the state, we want to ensure that we are effectively communicating with all of our elected officials,” the university stated. “He is adding to a very important effort, especially as we progress on the UM System NextGen initiative and the NextGen building in Columbia.”

The NextGen Precision Health Institute is a new research building currently under construction at a cost of more than $200 million. The university is using reserve funds, debt and donations to finance construction and lawmakers have appropriated $10 million for the project in each of the past two years.

Tilley has been close to Parson since both served as House members. Tilley helped Parson become chairman of the House Rules Committee in 2009, and chipped in $10,000 to Parson’s bid for state Senate in 2010. When Tilley resigned as speaker of the Missouri House in 2012 to become a political consultant and lobbyist, Parson was among his first clients.

During the 2020 campaign, Tilley helped raise millions for Uniting Missouri, a political action committee formed to help Parson win a full term as governor. And he remains a close adviser to this day.

For more than a year, Tilley has been working under the cloud of a federal investigation of his lobbying activities. In late 2019, the FBI began questioning officials in Independence about a pair of utility contracts.

Tilley’s firm is paid by the city to lobby on behalf of its utility, Independence Power & Light, and he has longstanding ties to a company that was awarded one of the contracts under scrutiny.

The FBI questions spread to Jefferson City in early 2020, with a handful of lawmakers, lobbyists and statehouse staff reporting being interviewed about Tilley’s ties to medical marijuana companies. Tilley has numerous medical marijuana clients, and records show he was in direct contact with state regulators throughout the months they were setting the medical marijuana program up, writing its rules and accepting applications.

A federal grand jury issued a subpoena to the state Department of Health and Senior Services around that time seeking information about four medical marijuana license applications. The copy of the subpoena that was made public redacted the identity of the four applicants, but Lyndall Fraker, director of medical marijuana regulation, later testified in a deposition that the subpoena was likely connected to the FBI’s investigation in Independence.

A grand jury subpoena was also received last March by the City of Independence, seeking records of non-public meetings of the City Council. Over the next few months, the FBI requested minutes of specific council meetings, receipts submitted by four council members for reimbursement and coordinate maps of neighborhood boundaries within city council districts.

FBI spokeswoman Bridget Patton declined to comment on the status of the investigation.

“The FBI neither confirms or denies the existence of an investigation,” she wrote in an email.

The Independent’s Jason Hancock contributed to this story.

This piece is reprinted with permission via Missouri Independent, which focuses on Missouri political and policy reporting.