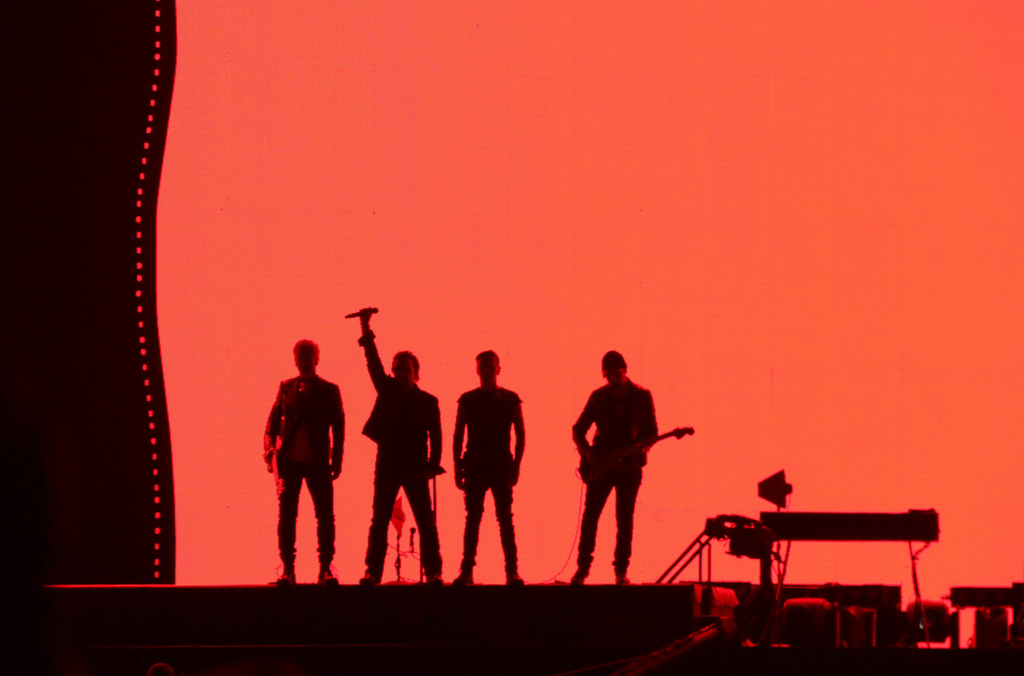 Though the band’s history goes back further, U2 has spent the past 30 years all but defining arena and stadium rock — a period that commenced upon the tour supporting 1987’s The Joshua Tree. That album catapulted the band to superstardom, became one of the decade’s essential albums and has remained central to the U2 mythos. The decades since have brought the band to Kansas City several times, but last night ended a drought of some 15 years.

It was worth the wait. Because on this tour, U2 performs that album in its entirety, before a stunning 8,000 feet of high-definition LCD panels. Which meant that, on yet another of this odd season’s memorably temperate nights, in the area’s biggest venue, nearly 50,000 people saw The Joshua Tree come to life.

The band began its two-hour performance with a reading of “Sunday Bloody Sunday” that was both intimate and epic. Singer Bono referenced the recent ugliness in Charlottesville, Virginia, and Larry Mullen Jr. pounded his drums, and the Edge fired out the political warhorse’s signature guitar lines. That opener and the three other pre–Joshua Tree numbers that followed (“New Year’s Day,” “Bad,” “Pride”) were played forcefully and without spectacle on a runway built from the stage onto the field, in the rough shape of a Joshua tree. These early moments, with the GA section crowded around the band, raising fists to the beat, were among the night’s best, a display of just how timeless the band’s best songs are, and how potent. 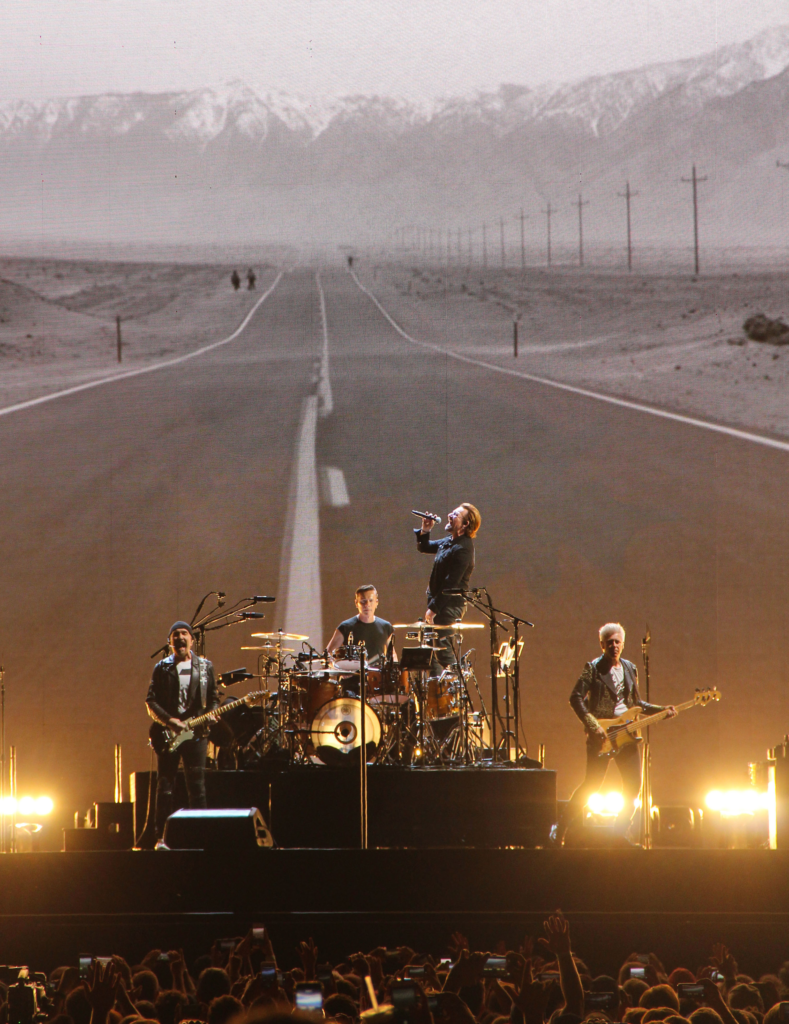 The band retreated to the larger stage, where the Edge began the cascading opening notes of “Where the Streets Have No Name.” Thus began the night’s draw, Tree‘s 10 songs, played in their album order. The staggeringly huge LCD screen behind the band came on, and a POV black-and-white scroll of footage, presumably shot from a vehicle, rolled down a long, dusty road, as though headed to the original Joshua Tree album cover. The band remained clustered together at center stage, resembling their formation at U2’s 1987 Kemper Arena date. Bono’s voice — over the expert execution of Mullen, the Edge and bassist Adam Clayton — rang full and clear, sounding as strong as ever.

The band continued to dazzle with the hits “I Still Haven’t Found What I’m Looking For” and “With or Without You,” set against more desert scenes on the video board, with Death Valley’s stark and barren mountains in a full blaze of color for the latter. While I’d heard from some that the band’s 360 Tour was visually stronger, it was impossible to be unsatisfied with last night’s union of songs and images.

As the band progressed through the album, Bono repeatedly went full Bono: He praised middle-American values of generosity, helpfulness and good spirit while not subtly advocating the band’s progressive political beliefs (subtlety not being what has made Bono, you know, Bono). He noted that the United States has long been a refuge for the Irish during times of need, and he thanked Americans for welcoming his country’s people for hundreds of years (whether the Irish were actually welcomed in our history being a matter for some other, more nuanced occasion), before making the logical jump to our current predicament with regard to refugees and immigrants and DACA “Dreamers.”

“The Irish were the original Dreamers,” he said. “The future was built for and by dreamers.” This particular sentiment was received with polite warmth, considering it was espoused in Missouri. Throughout the evening, Bono name-checked other beliefs, decrying the white-supremacist sentiments on display in Charlottesville and strongly advocating for Black Lives Matter and feminism. Patience for these ideas was somewhat more limited, at least in the section I was in, but there was no hostility, either. (Maybe there was discomfort, but that’s all part of the Bono approach.) All of these monologues were couched in a broader message of unity and love, which in theory every human at a pop concert should be able to get behind.

So, yeah, Bono was totally preachy. He is totally preachy all the time. This is his brand. Also, he’s not wrong. (My editor at this publication has mentioned to me more than once what he calls the Bono Doctrine, to which I subscribe: Bono, both musically and politically, hath done more good than harm. So, preach on, friend.) 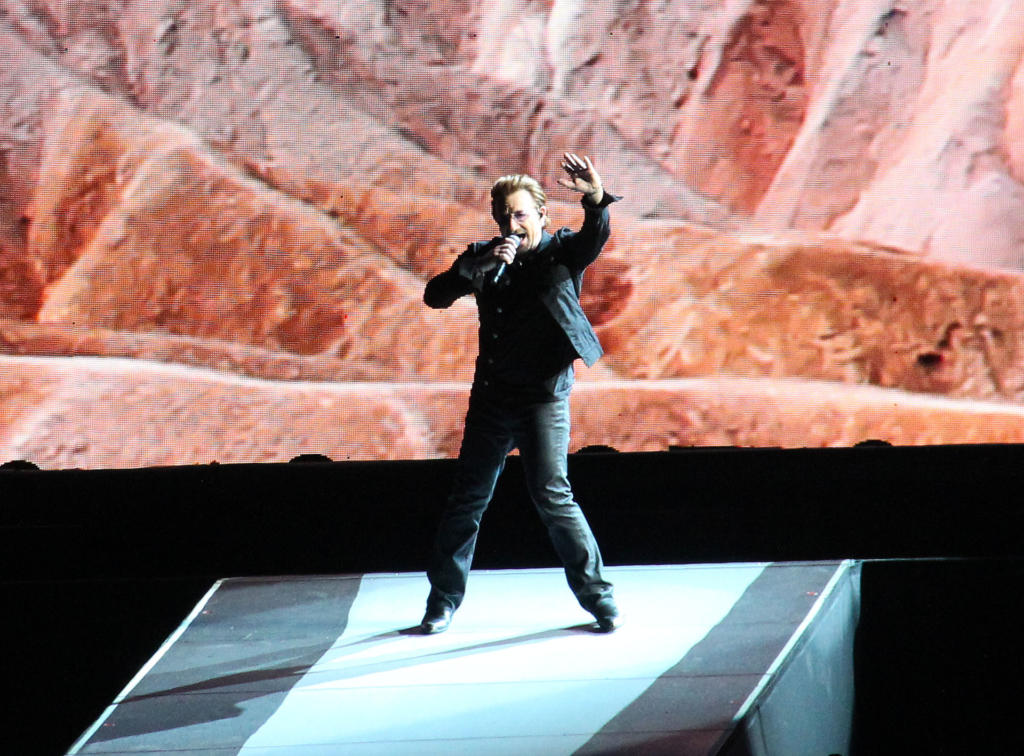 A clear highlight of what Bono called Side 2 of “the cassette” was a big, brooding performance of “Exit,” one that involved Bono heading back down the tree-walk in a flat-brimmed hat indistinguishable from his late-1980s look, rousing the crowd at the end of the thrust. The album’s closer, “Mothers of the Disappeared,” became a hymn as the LCD screen showed us a line of haunted women holding candles that, one by one, went out.

The post-album set amounted to an encore centered on latter-day hits: “Beautiful Day,” “Elevation” and “Vertigo” were greeted as big stadium bangers by a big stadium crowd. A new song, “You’re the Best Thing About Me,” followed, with Bono introducing it as the second time the song had been played live. Like so much of the band’s post-2000 output, this number, from the forthcoming Songs of Experience, sounded like something grown in an expensive lab, engineered to be played at weddings. (Chalk this up to a little counterweight re: the Bono Doctrine.)

U2 righted the balance by closing with two songs from Achtung Baby, including the great “Ultraviolet (Light My Way),” which Bono dedicated to women, both in our everyday lives and those who fight for women’s rights. As the song shimmered, female heroes well known and less familiar shone from the screen: Michelle Obama, Moms Mabley, Eleanor Roosevelt, the Match Strike Girls, Pussy Riot and many others.The band finished its night with one final call for unity in the United States, a place Bono said he and his bandmates love and consider a second home. He referenced the unity of spirit witnessed this month in Texas and Florida, then settled into a slowly grooving “One.” For a night that largely began blissfully awash in nostalgia, the present also became inescapable. But it also felt like that might be OK. 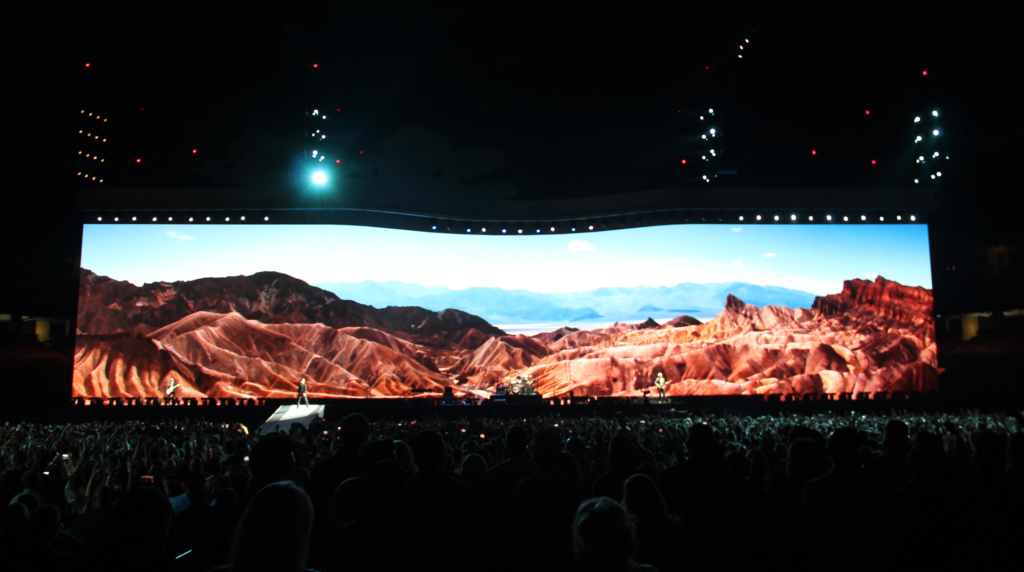 It feels maybe a touch wrong to limit assessment of Beck’s opening performance as some kind of afterthought. Beck was on-brand, too: funky, light and fun. He talked about spending summers in Overland Park, and he gave wide berth and what looked like true affection to a startlingly great band. He played his newest, “No Distraction,” as well as a range of career-spanning hits: “Where It’s At,” “Loser,” “Devil’s Haircut,” “I Think I’m in Love,” “Wow.” Any other night, no one would have wanted his set to end.

Pride (In the Name of Love)

Where the Streets Have No Name

I Still Haven’t Found What I’m Looking For

With or Without You

Trip Through Your Wires

Mothers of the Disappeared

You’re the Best Thing About Me

Soul of a Man

Where It’s At (reprise)