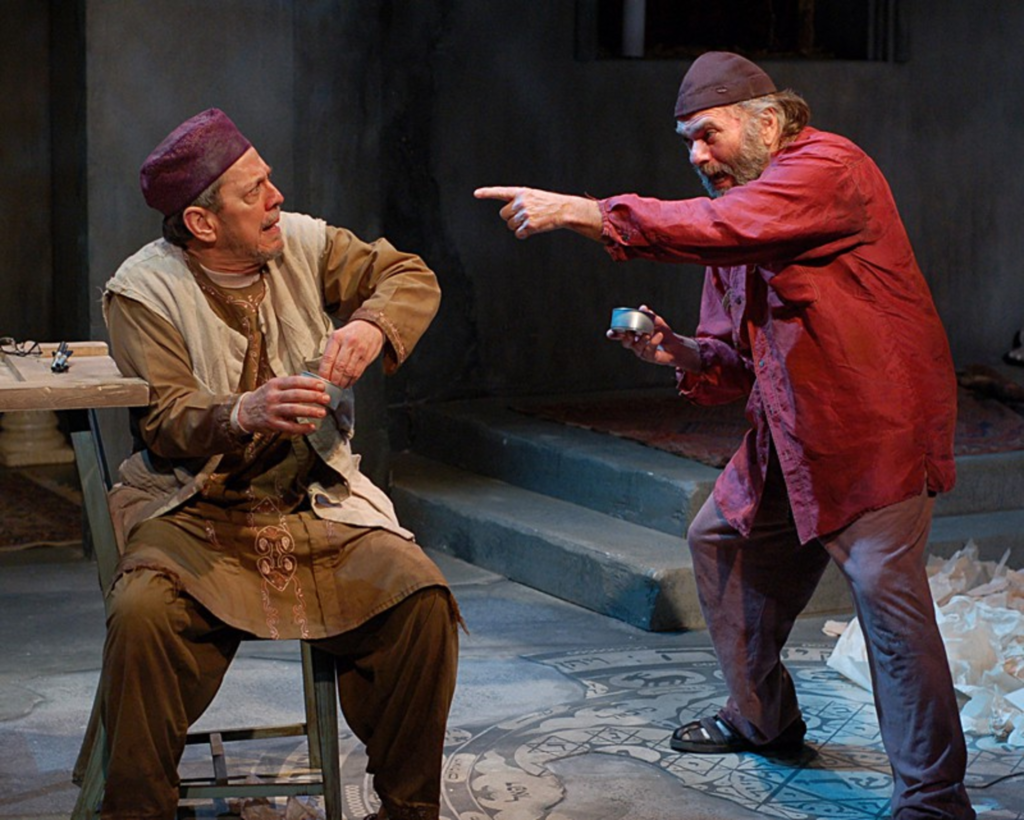 If the title of Seth Rozin’s play, Two Jews Walk Into a War, at the Unicorn Theatre, sounds like the opening of a joke, that’s because it is. The setup: Two men are the last Jews in Kabul. The punch line: They hate each other’s guts.

Ishaq, a fastidious, widowed accountant (Jim Korinke), and Zeblyan, a carefree, earthy carpet salesman (Robert Elliott), live together in Kabul’s remaining synagogue (Evan Hill’s convincingly dilapidated set), which has been stripped by the Taliban of its Torah, tefillin and other religious items. Though avowed enemies, Zeblyan and Ishaq are united by their determination to restore the synagogue. Step one is the daunting task of re-creating a Torah. Fortunately, Ishaq has every word memorized. The steadier-handed Zeblyan serves as scribe, kvetching all the way.

As they hurl abuse at each other, the actors skillfully leverage every scene for laughs and meaning. Korinke is terrific at depicting Ishaq’s devout decency and irritating pedantry, and the personable Elliott slides beautifully between soulfulness and belligerence. (Jon Fulton Adams’ costumes accentuate the characterizations — Ishaq formal in a kurta, Zeblyan casual and disheveled.)

The format, short scenes punctuated by blackouts (and gunshots), gives Two Jews a choppy feel, particularly at the start, but
Cynthia Levin’s lively direction keeps the momentum going. It’s when the Torah’s more arcane passages begin to be discussed that the play takes off. Those familiar with Jewish law may already have heard jokes about whether elephants are kosher and that blended fabrics are sinful. But Elliott is such an ebullient performer that he still gets mileage out of such Seinfeldian speculations as God perhaps favoring a little “girl-on-girl action,” sacrilege that infuriates Ishaq.

Rozin shows his Holocaust card early, then plays it at the end. The couple next to me, among many so appreciative they applauded between scenes, burst into tears at the appointed moment, making me feel all the more churlish for finding the poignancy cheap and unearned.

Although details are disputed in a murky he-says, he-says, the true story that inspired Rozin is stranger and sadder than his play. The real-life odd couple were arrested and beaten by the Taliban after repeatedly reporting on each other with accusations of spying, thievery and brothel running. The Torah was confiscated as the men feuded over it.

Rozin has sanded off these complications, simplifying his characters into showily cranky, righteous victims. Contrary to the title, Ishaq and Zeblyan didn’t walk into a war. They were born in Afghanistan back when Muslims, Christians and Jews cohabited in peace. The conundrum is why they haven’t walked out, especially when Zeblyan’s family now lives in the United States and Ishaq’s is in Israel. On the compelling questions of the Jewish Diaspora, history and identity, as well as the universal question of where and why one makes a home, this comedy takes a crowd-pleasing path and misses the chance for a more profound inquiry.

Even with Tim and Nina Zagat in the lobby, Fully Committed‘s restaurant of the hour has far less to do with food than with power. At this nexus of epicurean fetishism and social competition, the baseness of the characters is a given.

Under the direction of Fishtank curator Heidi Van, the likable Shea Coffman squeezes good-natured comedy out of desiccated bits. He’s especially good as the few sweet characters, especially the protagonist, Sam, who answers the reservation line by himself when his manager goes AWOL. But most of the caricatures are unpleasant, the noise level shrill, and the barrage as overwhelming as a tasting menu of tempting but oversalted delicacies. As much as I enjoy slumming in vapidity, I was more often aghast than amused, and I was relieved when Sam’s shift was over.

In addition to playing 40 characters, Coffman gets mad props for the restaurant-basement set. Remember those obsessively detailed art-installationlike environments that the serial killer created around each victim in the movie Seven? Well, the Fishtank’s space looks exactly like those, only funny.

Like Harvey, Molly is imaginary, which makes her the best Manic Pixie Dream Girl yet. (MPDGs are those vigorously quirky goddesses who exist only to inspire brooding young men to cast aside their amorphous sorrows and live — see Mary Elizabeth Winstead in Scott Pilgrim vs. the World, Natalie Portman in Garden State, and most of Zooey Deschanel’s oeuvre.) This means that actresses playing Molly have to convey that she’s both less and more alive than normal humans, an impossible task that Kimberely Queen nevertheless gives valiant effort. Her pugnacious sexpot is all blunt-force id, and her petite intensity makes a great sight gag next to Moses’ towering droopiness.

The Living Room excels at throwing itself into new, intriguing challenges. Maybe soon it’ll try the challenge of a real female character — one that’s more than male fantasy projection.