The 21st century’s first epic poem gets a movie to match its scope. 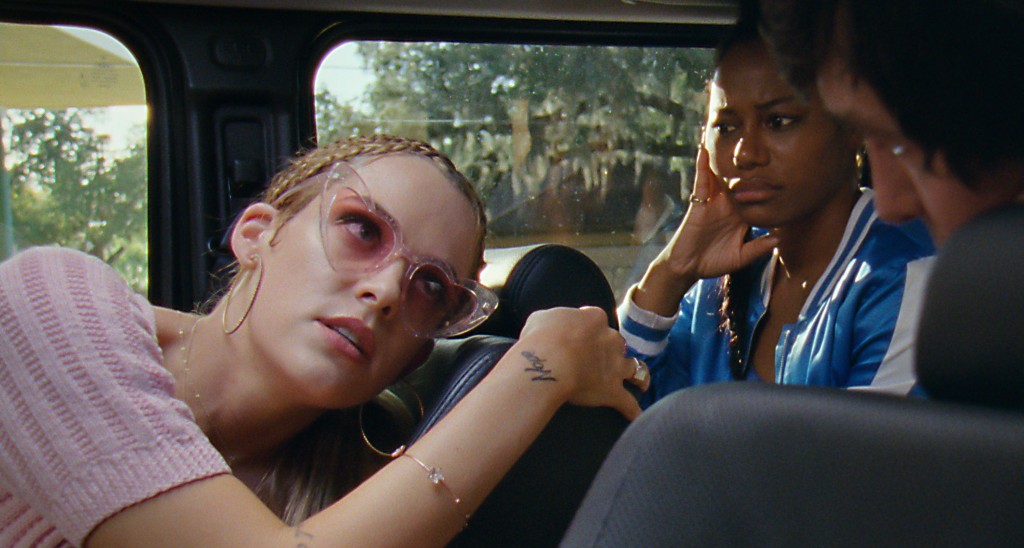 In a post-Twitter world, threads are the new folklore. Whether they’re true stories or imagined dialogues, they’re like a digital version of the oral tradition, tall tales passed from reader to reader, embellished with each retweet, the legend growing every time they’re removed, reposted, or added to.

Zola isn’t the first movie to adapt a Twitter thread—that distinction belongs to You Might Be the Killer, which turned Chuck Wendig and Sam Sykes’ viral joke exchange into a surprisingly fun, competent indie horror-comedy. It is, however, the first adaptation of a story involving real people, recounting A’Ziah “Zola” King’s now-legendary odyssey of a road trip from Detroit to Florida gone horribly wrong, told with a skilled storyteller’s grasp of detail and compelling language.

In film form, Zola has exactly the right team bringing its subject’s story to the screen. Director and co-writer Janicza Bravo, working on the script with Slave Play scribe Jeremy O. Harris brings King’s tale to life, sparking animated performances from a talented cast of actors. In the wrong hands (which, in this case, would be almost anyone else’s hands), this could’ve been a trashy mess or an object of misplaced outsider curiosity that did King’s incredible story a disservice. Bravo and Harris, fortunately, have the vision to make Zola the observant, buck-wild piece of experimental art it deserves to be, something like Spring Breakers by way of David Lynch.

When Zola (Taylour Paige), a waitress and stripper, meets Stefani (Riley Keough) at work, it‘s fascination at first sight. The two women talk about their trade and their social media drama, and it feels like an instant, deep connection. When Stefani invites Zola on a road trip to Florida to dance and make a quick buck, Zola agrees. Things start going sideways when Stefani picks Zola up with her clueless boyfriend (Nicholas Braun) and malevolent roommate/pimp X (Colman Domingo) in tow. Upon arrival in Florida, dancing at a club quickly turns into prostitution, with Zola acting as an unwilling intermediary for Stefani and X.

Keough gives Stefani an experienced liar’s charm and reckless ebullience, and Braun is well cast as a bro-ier version of Succession’s Cousin Greg. As X, Domingo continues his welcome upward career trajectory with a performance that’s alternately Velveeta-smooth and Dennis Hopper-in-Blue Velvet frightening, a switch he pulls off with hairpin-turn accuracy. Even among this stacked cast, relative newcomer Paige outshines everyone, giving Zola real-world groundedness while also exuding a sense of “can you even believe this?” exasperation and discomfort. If you’ve ever been stuck in a room or a car with people you dislike, you’ll recognize every look she gives and every barely-tolerating-this-shit platitude she utters.

Bravo accentuates all this with appropriate bizarro visuals that incorporate realistic filming with fluorescent-lit candy-colored locations and social media augmentations that include title cards, emojis and overlaid twitter sound effects that remind us of the medium being used to communicate this story. These are characters who live their lives almost entirely online. Mica Levi’s score, made up of app-like chimes and notification dings, drives home that point even further.

Throughout its wild story, Zola never lets you forget the various filters through which we’re experiencing this story, from social media exaggeration to gender, race, and class. Its occasional quirks and unexplained beats feel true to the way it feels to encounter someone’s story through a series of 280-character missives, and the way that format requires us to read between the lines. Zola feels like a true attempt at digital-age storytelling, and any bumps along the way are purely intentional. The balancing act it pulls off is insightful and impressive, and lays the groundwork for other inevitable films like it to come.