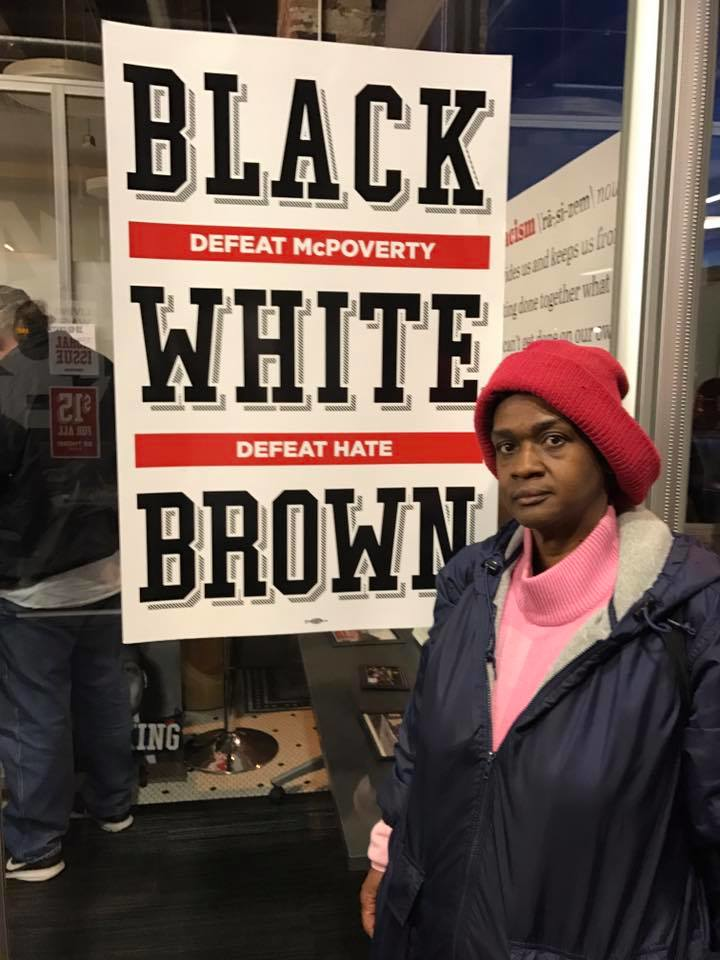 Fights to increase the minimum wage have been waged across the country the past few years. But in few places has the struggle been as bitter, or as confusing, as what has unfolded in Missouri.

Which means that, no matter the result Tuesday, low-wage workers here won’t get a raise anytime soon, thanks to the pre-emption at the state level, which is itself owed to the endless party theater on the national political stage.

Caught in the middle of all this political symbolism are low-wage workers, all of them real people.

For instance: Sharon Parker, 55, of midtown, a Burger King employee for more than two decades and a member of Stand Up KC — the local chapter of the Fight for $15 movement, which fights for increased minimum wages, union representation and other benefits for low-wage workers. On the days she works at the fast-food giant, she wakes at 5 a.m. and takes two buses so she can clock in and be ready to open the restaurant at 6 a.m. Her days, she says, are stressful and tiring; the routine takes its toll on her body and her mind.

“I’m making breakfast sandwiches, biscuits and burritos as fast as I can,” she says. “For four hours, I’m going hard. I’m doing the jobs of, like, three people, running around that kitchen like a maniac.”

By 2 p.m., she’s finished with her shift but is still thinking about the work. She takes a few moments to herself at a park sometimes, or window-shops before heading home. She does this, she says, so she doesn’t “take that stress home with me.” That stress, she points out, includes the knowledge that a majority of elected officials in her home state seem so opposed to her making a better living — and the mental energy required to stay involved in the push for more. “Our state lawmakers took away our right to raise the local minimum wage,” Parker says. “But that doesn’t mean we’re giving up.”

“I’ve been working there since I was 18 years old,” she adds. “I don’t know how much longer I can do this.”

At 55, she’s a mother of two and grandmother of two more. She thinks about retirement, but worries that it’s unattainable. “Older people like me who have worked a long time dedicated to the same companies need a retirement plan,” she says. “I feel like I might have to work until I drop.”

Missouri’s minimum wage — among the nation’s lowest at $7.70 per hour but slightly more than the federal $7.25 rate — is simply not enough, says Parker, who earns $9.22 an hour. “I feel like people don’t understand how little that is.”

A recent study by the National Low Income Housing Coalition found that, in order to rent a two-bedroom home in Missouri, a minimum-wage worker would have to work 81 hours a week, on average. In Kansas, an average of 86 hours a week gets you the same modest home.

“After rising significantly in the post–World War II era, it started falling behind inflation in 1969,” Ancel says, via email, of the minimum wage. “And today it is entirely insufficient to provide a basic standard of living for workers.”

Opponents of raising wages believe a higher minimum would be bad for the economy; they say it would stifle small businesses that have smaller margins for payroll, among other factors. Ancel disagrees. “Raising the minimum wage has been shown repeatedly to be good for the economy by generating more economic activity,” she writes, “and especially good for families raising children at or near the minimum who can begin to move out of poverty.”

Question 3 is not the beacon of hope that workers and labor advocates had hoped to see on this ballot. Stand Up KC, which supported previous efforts to raise the minimum wage, has sat out this round because of the state’s pre-emption. Kansas City’s chapter of the Industrial Workers of the World — a labor union founded in 1905 — has taken a similar stance: While its members plan to vote “yes” Tuesday, they aren’t exactly enthusiastic, according to a representative of the union, who asked to remain anonymous due to the nature of labor organizing and possible related retribution.

“We believe that there are many more unexplored avenues to building power in the workplace,” the person says, “but that the immediate mitigation of harm caused by low wage work is an absolute must.” While efforts to raise minimum wages have “shot new life” into workers who may not have cared about labor issues in the past, the person adds, the IWW has typically avoided “legislative pressure campaigns.” “But our members do support this valuable struggle, as it affects many of us personally.”

“These actions are anti-democratic,” Ancel says of Greitens’ willingness to pre-empt wage increases at the city level. “They are cruel to our low-wage workers, and they’re another sign of the cronyism and corruption which plague our state government.”

“I think it’s important for Kansas City voters to send a message to the governor and Republican legislators by voting yes,” she writes.

And that message is far less complicated than the political drama surrounding it.

As Parker puts it: “I know that what we need is a real raise.”

J. Cook is a freelance reporter based in the metro.