True Lions’ Alison Hawkins goes track-by-track on their full-length, The Fempire Strikes Back 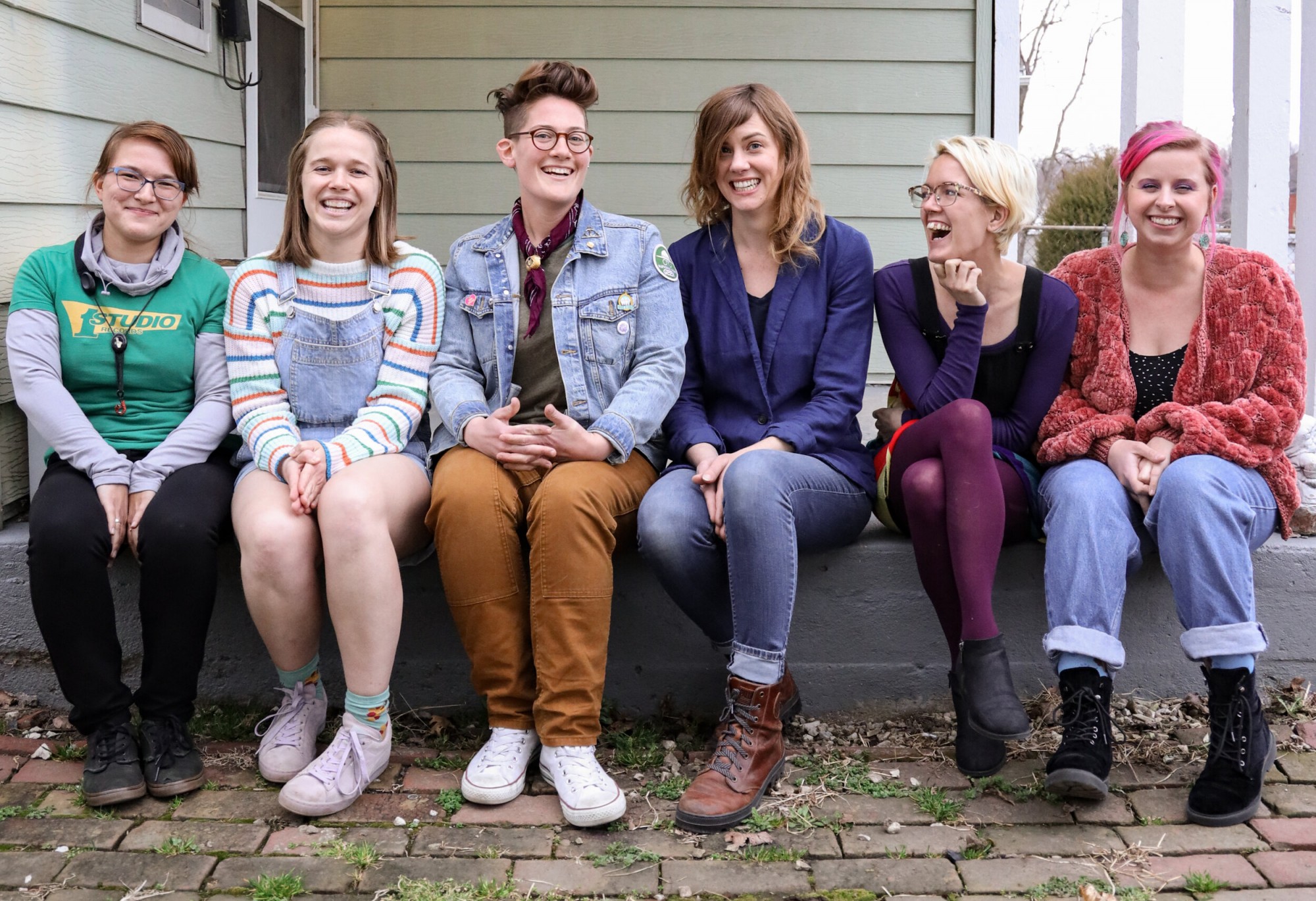 Today, True Lions—the Kansas City-based “flosspunk” alt-pop supergroup led by Alison Hawkins—releases their debut full-length, The Fempire Strikes Back, on Manor Records. After two EPs in 2019, this collection of songs sees the band continuing their ability to confront serious subject matter with a light and often silly approach.

As True Lions put it, they maintain an anti-patriarchal agenda while still having a fun party time, calling it “carbonated honesty.” The collective of women/nonbinary/trans/boi/vegan folk features at various times Elizabeth Kosko, Teri Quinn, Claire Adams, Adee Rocket Dancy, Aryana Nemati, KuJo, Iona DeWalt, and Miki P, all of whom make music in myriad other ways, making this probably one of the few times the “super” in “supergroup” is so apt.

We premiered True Lions’ You’re Not Invited EP when it released two years ago, so we’re really excited to be bringing you a track-by-track breakdown of The Fempire Strikes Back by Hawkins, wherein they tie songs to the femme-spired characters which with they resonate. Take a listen and read along!

Let me preface this by emphasizing that I love horror/sci-fi/dark comedy movies, and I love dressing up as my favorite characters for Halloween. Tracks are listed in the order that they’re presented on the album.

These explanations are loaded with spoiler alerts!!!!!!

Admittedly, these characters are mostly all white women, revealing some flaws in my influences. These are movies I’ve enjoyed most of my life (minus the films released recently).

The track “Give It Back” strictly means what it means. It’s a land acknowledgment that The Fempire Strikes Back was written, recorded, produced, and sold on stolen ingenious land of Osage, Kaw, Sioux, and Kickapoo peoples. It’s a call to action to end colonialism, period. It would be tacky and totally inappropriate to compare it to any cult horror/sci fi movie.

This is my favorite track on the album. The lyrics were adapted from a poem written by my friend B. Bohrer, addressing sexual violence, body autonomy, and eating disorder. Roman Polanski’s Rosemary’s Baby comes to mind: Mia Farrow’s character is literally assaulted by Satan, and he impregnates her with the prince of darkness. Her once trustworthy support network crumbles around her; turns out, everyone’s in a Satanic cult making decisions about her body and future for her. There are so many consent breaches in this movie!!! Without being explicitly gorey, they restrain her, sedate her, lie to her, and she’s horrifically stripped of her independence. It’s a bad feeling and it’s all too familiar for most women.

“Bad Poetry” is a collaboration with The Swallowtails (Miki P, Adee Rocket Dancy, and Rachel Lovelace) and the lyrics are adapted from poetry written by our friend Anna Bauer, who’s basically True Lions’ Fifth Beatle. Pan’s Labyrinth intertwines real world and fantasy, centered around a young girl, Ofelia, who meets strange, fantastical creatures and child-eating monsters on her quest of achieving tangible, real-life goals for herself. Determined to help her ill mother and newborn brother, she’s equipped with a piece of magic chalk that helps her create a portal, where she heroically accomplishes nearly impossible tasks using the magic inside of her to cure her inner turmoil. Similarly, “Bad Poetry” is a personal journey for belonging and using poetic magic to care for yourself and friends. And wow that lovely bassoon solo! 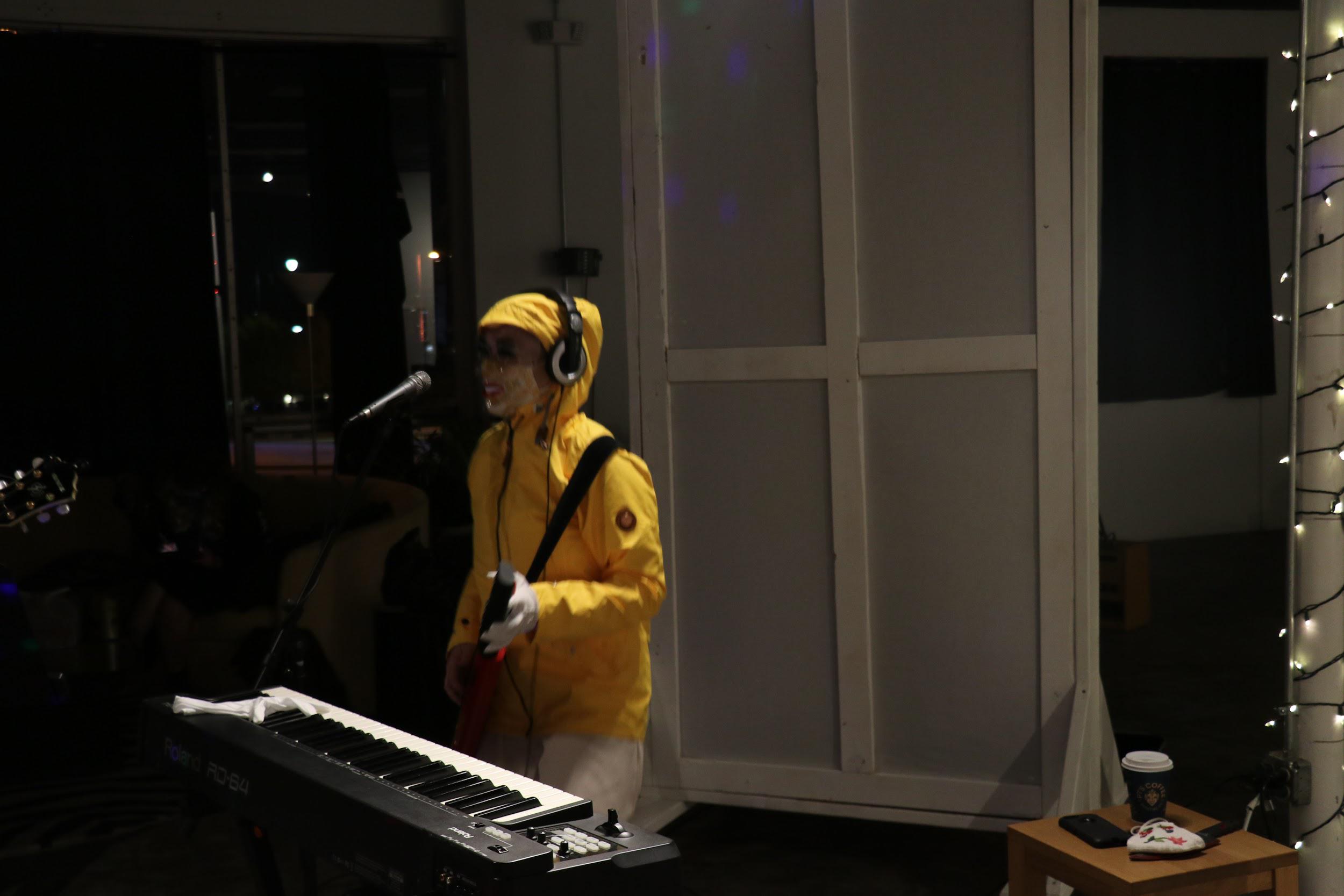 This is the only song on this album that is actually directly influenced by a film. The lyrical imagery of “Communion Day” is inspired by Alice, Sweet Alice, where a young girl named Alice brutally murders her sister Karen (Brooke Shields) on her First Communion at church, disguised in a yellow raincoat and plastic mask of an ornately made-up feminine face. I discovered this film during the pandemic and was instantly obsessed. I’m fascinated by the film’s anti-Catholic themes, iconography motifs, and commentary on family conflict, divorce, sister rivalry, and jealousy.

I didn’t grow up in the Catholic Church, but I’ve witnessed the church’s oppressive tendencies: condemning same-sex relationships, attacking reproductive rights, largescale manipulation and coverup of child sexual abuse, and intense pressure to conform. I was so inspired by this movie that I was Karen for Halloween, which was also the first day we started recording The Fempire Strikes Back at Deep Space Co-Op.

This tune sounds bouncy and sweet, with all its “ooh sha la la’s” and our outrageous music video of me on a bike in a lion costume rental, but the subject matter is quite serious, and it describes a time in my life when I experienced severe relationship abuse. Both this song and Robert Eggers’s The VVitch describe being trapped in an isolating situation, needing to get out, not easily finding the exit, and meanwhile, not being believed or understood by loved ones.

The VVitch is the story of a Puritan family encountering evil on their secluded farm in the woods of New England. The oldest child Thomasin, is looking after her newborn brother and playing peekaboo with him, when he abruptly disappears. This scene is quite alarming. She experiences significant trauma, and she’s alone in witnessing it. It’s later revealed that the witch stole her unbaptized brother, but Thomasin isn’t believed by her family, and her mother accuses her of being responsible for the baby’s disappearance, which leads to Thomasin being unfairly blamed for a series of other misfortunes and tragedies. This ultimately leads to the utter dissolution of their entire family. My interpretation of the ending is that Thomasin finds empowerment by cutting off the haters, joining a coven, and achieving true ascension: my idea behind “Escape Room.”

“Flamingo Stay” is about my chickens—Falcon, Flamingo, and Goose—and their cliquey goofy bird drama. They’re always getting out of the yard and causing trouble in the neighborhood. Sadly, Falcon died last summer, and I figured I could humorously cope with the loss by comparing this song to the morbid comedy Heathers, a commentary on teenage suicide, exclusion of misfits, and selfish high-schoolers inappropriately dealing with death.

I realize this isn’t a horror or sci-fi movie…but it depicts horrible events, and the dark comedy element seemed fitting for “Flamingo Stay.” Winona Ryder’s character Veronica is pretty flawed, but relatable, in that she encounters harmful groupthink, homophobia, racism, fatphobia, bad rape jokes, and dating violence. Her classmates humorously die off, but she maintains her popularity. I appreciate the film’s subversive look at peer pressure and cruelty. How very.

“Ignore the Ghost” is about being bullied. It’s an anthem for not making yourself smaller or invisible for people who don’t love who you are, but instead, empowering yourself to become a (fierce and spooky) force to be reckoned with. To stress this point, we repeatedly sing, “I’m still here,” during the bridge. Carrie is the perfect parallel film for this song; I didn’t choose a cliche ghost story movie, but something more representative of real life. Stephen King is excellent at writing about trauma under the guise of ghouls, clowns, and in this case, telekinesis. Sissy Spacek’s character has special powers that she can’t talk about, and an abusive mom and awful classmates who mistreat her for being awkward and different. The first time I watched Carrie, I was young and impressionable, not having yet reached puberty, so the opening scene where her peers are aggressively laughing at her and throwing tampons at her for menstruating in the shower in gym class terrified me. I have so much empathy for her character. Although malicious, good for her for seeking personal justice. 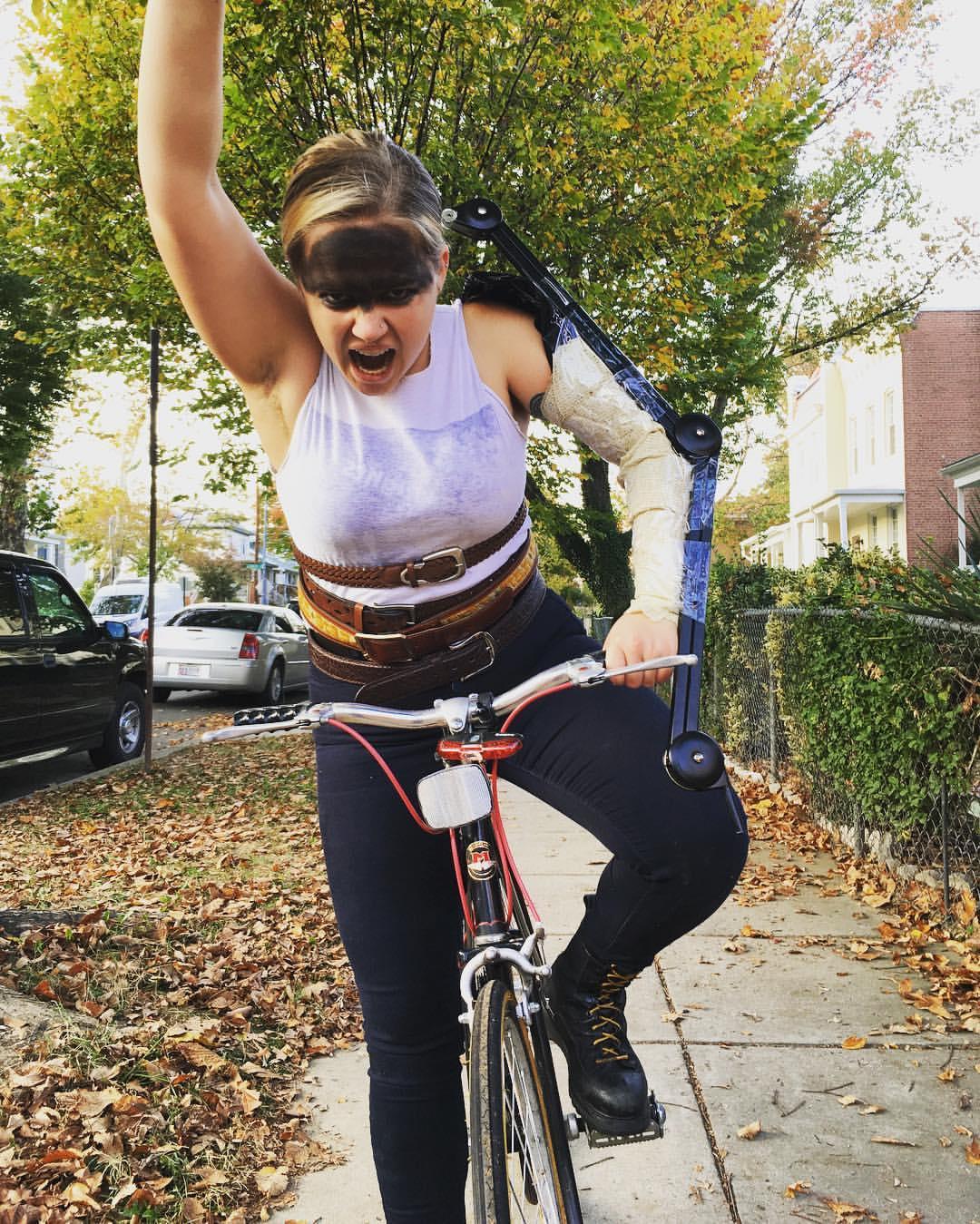 Before seeing Mad Max: Fury Road, I found the Mad Max franchise extremely boring. Where were all the strong women?? I felt inspired by Charlize Theron’s character Furiosa for her bravery and optimism in the face of patriarchal enslavement. She saves vulnerable people from trafficking while fighting off toxic masculine biker gangs in a post-apocalyptic nightmare world. “Carrot Cake” is about planting seeds for a world you’d like to see. Sure, it’s about cake and appears shallow, but in all seriousness, this was my secret protest song when the Movement for Black Lives was building momentum in KC in summer 2020. I felt (and still feel) eager for radical change, to abolish police, end white supremacy, and heal from the pandemic. Meanwhile, everyone was (and still is) experiencing isolation, despair, and societal trauma. The song probably seems cutesy, but not if you substitute “revolution,” for “carrot cake.” Revolutions take a long time. From what I’ve learned from activist leaders, we can’t give up. 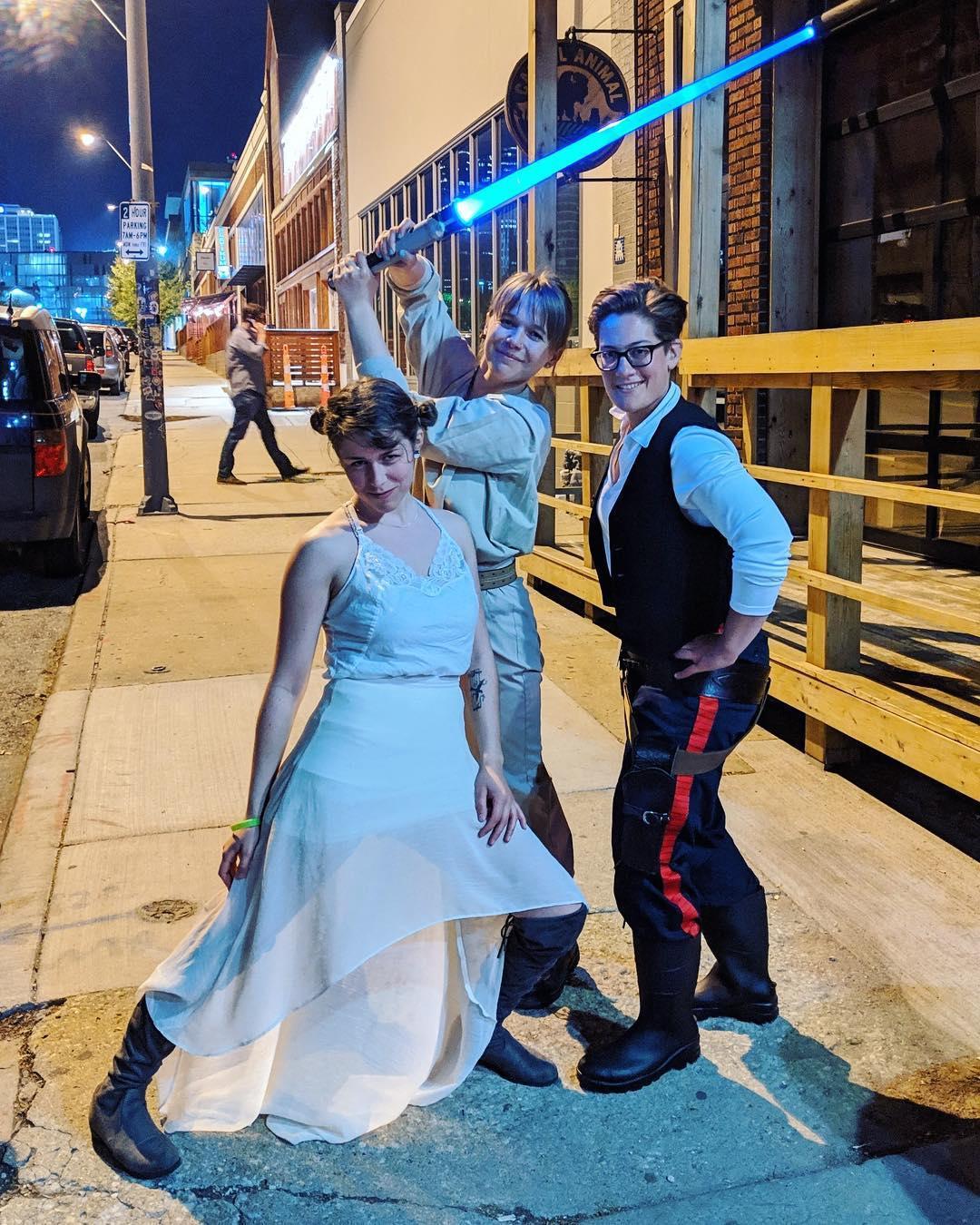 Miki P, Alison, and Elizabeth at our May 4, 2019 show at The Brick. Also this was Elizabeth’s first show with us and our first time having a drummer!!! // photo courtesy Alison Hawkins

This track overtly tackles climate change, as you can hear me list the numerous ways in which we’re all destroying our planet in the verses. Everyone in true lions deeply cares about climate justice; most of us are vegans, and definitely all earth activists. I couldn’t create a list of my favorite sci-fi movies in relation to our album’s namesake without mentioning Carrie Fisher. In Star Wars: A New Hope, Princess Leia’s planet Alderaan gets annihilated by oppressive imperialist enemies. In the heat of a galactic civil war, The Rebel Alliance must stop at nothing to destroy the Death Star before it fires at the Rebel base. Leia is a compassionate, smart, badass leader, and all the boys gotta listen to her if they know what’s good for them. 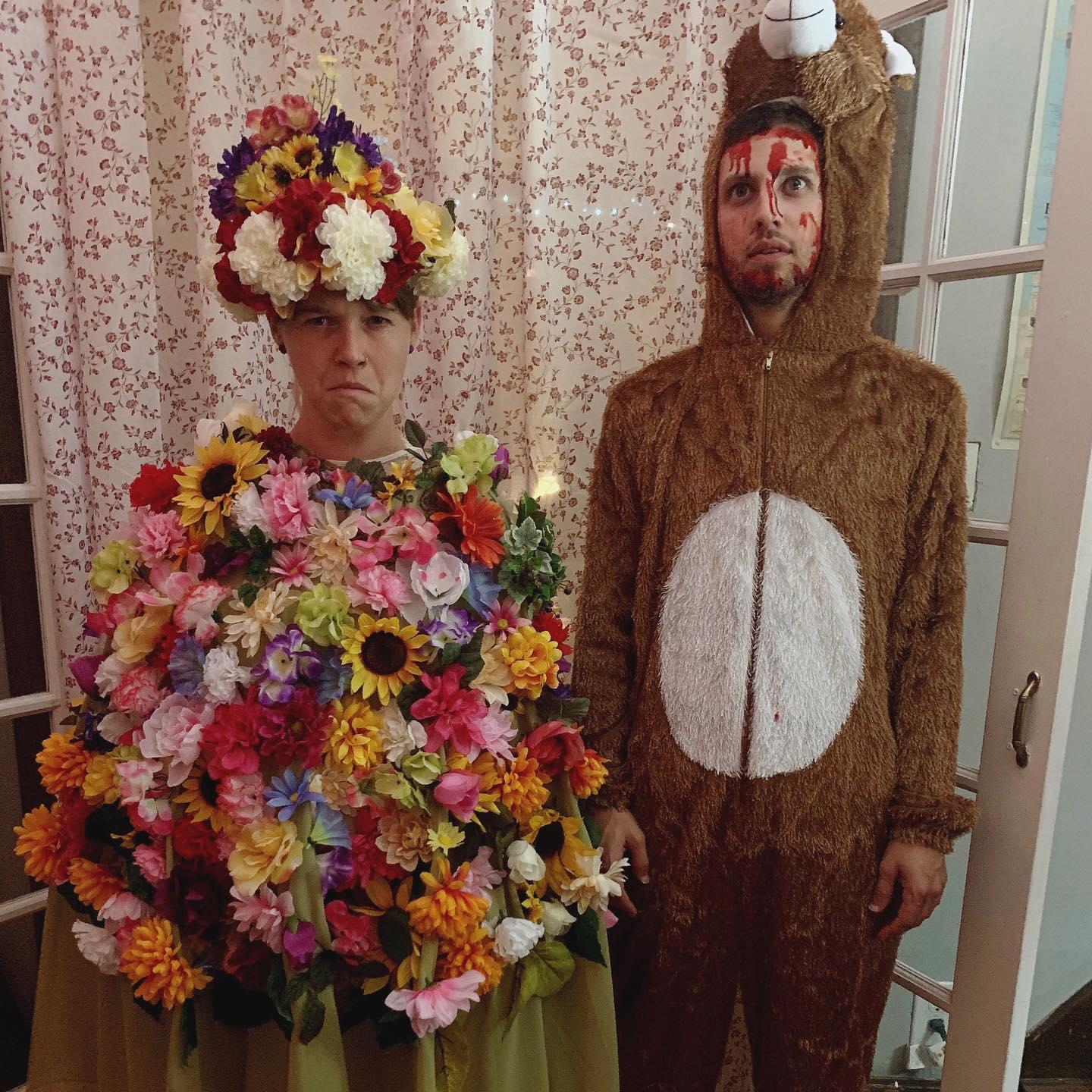 “Ode to Keytar” is about painfully crawling out of my depression hole in search of a hobby that ignites delight in my heart. The keytar—a significant motif in True Lions band lore—could be anything for anyone: hiking, painting, gardening, etc. Ari Aster’s Midsommar follows Florence Pugh’s character Dani to Sweden as she struggles to recover from horrifyingly tragic family loss. She incidentally finds herself on a commune at a midsummer celebration that quickly turns sinister. But she perseveres and tries lots of new things, even winning the maypole competition, where she is crowned May Queen! “Ode to Keytar” encompasses this exact sentiment. Like, have you tried psychedelic mushrooms and screaming fluently in a language you don’t actually know? Have you tried ceremonially sacrificing your emotionally distant boyfriend who cheated on you and forgot your birthday? “You can’t give up because you haven’t tried everything, yet!”