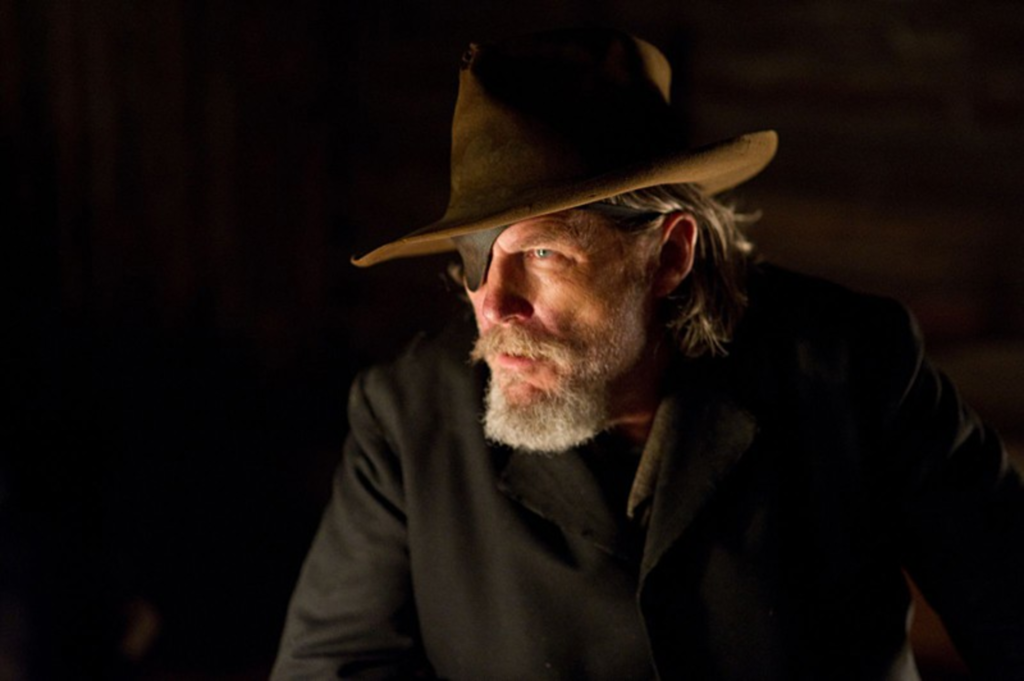 Boldly reanimating the comic Western that secured John Wayne his Oscar 41 years ago, the Coen brothers’ True Grit is well-wrought, if overly talkative, and seriously ambitious.

Opening with a strategically abbreviated Old Testament proverb (“The wicked flee when none pursueth”), the film returns the Coens to the all-American sagebrush and gun-smoke landscape that has best nourished their wise-guy sensibility (Blood Simple, The Big Lebowski, No Country for Old Men).

This perverse buddy tale, in which an implacable 14-year-old girl (Hailee Steinfeld) bonds in vengeance with the one-eyed, one-note, bounty-hunting windbag marshal Rooster Cogburn (Jeff Bridges in the Wayne role), is one of the brothers’ least facetious movies, despite a prolonged meet-cute as little
Mattie stubbornly attempts to roust Rooster from a rustic privy to secure his aid in tracking her father’s murderer into Indian territory.

The Coens are still themselves. As one colleague remarked, “They always do something to make you hate them.” (In my case, the moment happened early on with a gag based on the hanging of an American Indian.) But True Grit‘s most serious lapse is more aesthetic than ethical — and less Hollywood than film-school. The brothers repeatedly invoke a superior movie — not the 1969 True Grit, which is in every way inferior to the Coen version, but the 1955 classic Night of the Hunter, whose recurring hymn, “Leaning on the Everlasting Arms,” is repeated throughout the new True Grit.

For the most part, the Coens’ version is a highly enjoyable yarn, stocked with pungent bushwa and a full panoply of frontier bozos. The Dude’s Rooster is more nuanced and less overbearing than the Duke’s, as well as more original. (Wayne lifted many of his gravel-voiced mannerisms from Hollywood’s Depression-era Wallace Beery.) Never less than disciplined, Matt Damon — a strong foil to Bridge’s rumbling, stumbling, grumbling, grizzled scapegrace — is the upstanding, mildly pompous Texas Ranger LaBoeuf (a part originally played by singer Glen Campbell), who joins the magical mystery tour.

Once constituted, the posse makes for a mouthy, self-aggrandizing trio, although it’s relentless little Mattie who serves as the movie’s key gimmick. Even feistier than the much-lauded heroine of Winter’s Bone, she’s self-possessed, schoolmarmish, full of sass, and downright uncanny. “I am puzzled — what is she doing here?” LaBoeuf more than once wonders in the oddly formal, faux–Mark Twain diction that characterizes the dialogue.

The Coens manage to render Choctaw country uncanny as well. The spectacle of a corpse dangling from a tree and a bear seemingly bestride a horse are portents worthy of Jim Jarmusch’s Dead Man. The brothers have always been good on scary outlaws (in this case, Josh Brolin) and, with its sod houses and bleak weather, their West is as inhospitable as it should be.

Despite, or perhaps because of, Wayne’s clownish performance, True Grit I was the comfortingly “normal” middle-American Western of its season, opening a week after The Wild Bunch splattered screens with war-movie carnage and a few months before Butch Cassidy and the Sundance Kid insouciantly trashed the genre’s remaining moral pretensions. The Coens’ True Grit is considerably more faithful to Charles Portis’ novel than was the 1969 movie and consequently far darker.

For years now, just about every credible Western (Unforgiven, Dead Man, Wild Bill, The Assassination of Jesse James) has been an oddity. True Grit belongs with these ghost stories and, in suggesting that we’re all haunted by things we can’t understand, it carries its own Coen-trademarked mystery. Whereas the full biblical proverb that introduces True Grit ends with praise for the bravery of the righteous, the Coens cut directly to the chase, suggesting only the power of a guilty conscience. 