Trey Hock, the bathroom selfie, and me 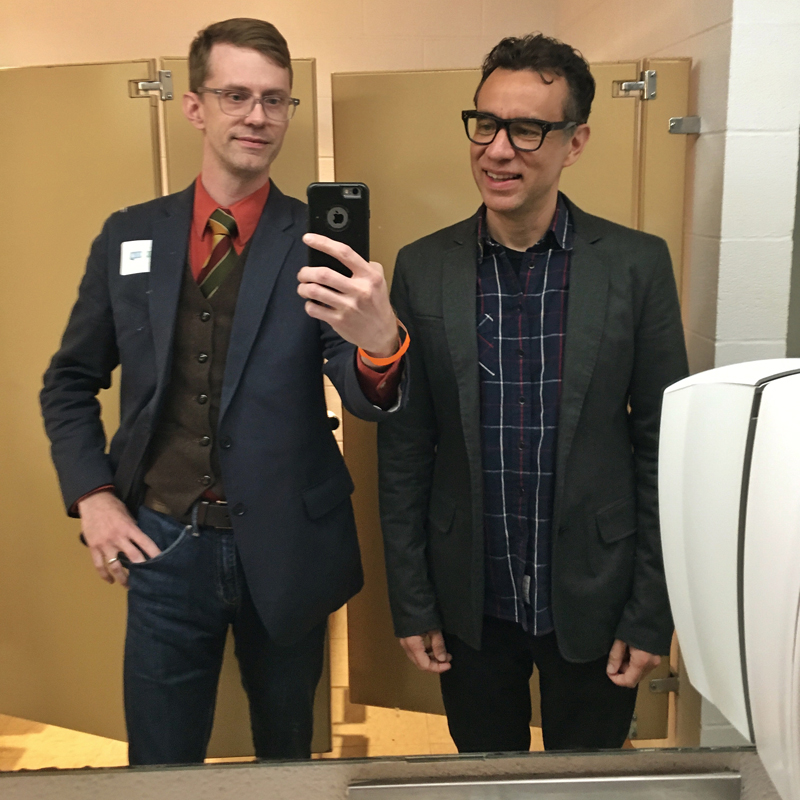 The tattooed cooks behind the counter at Grinders follow with their eyes as Trey Hock and I rush into the restaurant’s men’s room together. We shut the door behind us and flip on the light switch.

In the weak glow, we see a pile of ice melting in the urinal. Some past patron has used a blade to etch his thoughts into the small mirror. It’s not much of a room, this, and it offers zero in the way of rest, pulsing as it does with vibrations from the music and hubbub just outside. Hock rests an elbow on the towel dispenser and sets his chin atop outstretched fingers. The pose is campy and cute, like a school photo, and it alleviates the bathroom’s sinister ambience. He grins, snaps the photo he had in mind (a selfie; I’m just here to see how he does it), and we slink out again. The eyes are on us again.

Hock is used to this. He spends a lot of time in bathrooms.

At least that’s what I came to believe after I found the Instagram feed for his ongoing project, Middle-Aged Bathroom Selfie, with its 100-plus photos of Hock facing himself in various washroom mirrors, generally looking good. (He wears jackets over waistcoats and favors large-framed eyeglasses and bow ties, a style that is its own visual signature.) The selfie that first got my attention: a photo of Hock with Saturday Night Live and Portlandia actor Fred Armisen. Hock introduced Armisen at the Middle of the Map Fest and didn’t miss the chance to include the comedian in his selfie project.

To my eyes, then, Middle-Aged Bathroom Selfie hits the social-media trifecta: It’s amusing, consistent and visually pleasant. And now I’ve devised a highly professional question to ask, as an overture to writing about his art: Can I follow you into the bathroom?

We meet at Crossroads coffeehouse Thou Mayest, and Hock gives me the rundown of his project. “It wasn’t until I started participating in selfies that I became aware of a level of consideration almost every identity or selfie artist working online has considered,” he tells me. “Selfies are about projecting an idealized self, and we have the power to curate that on our feeds.”

I’ve asked Hock to take me on a toilet crawl: five bathrooms in the Crossroads, five chances for me to observe his method. Thou Mayest is both interview rendezvous and first stop on the tour. After we’ve talked for a little while, we cram ourselves into the coffee shop’s tiny, dim lavatory.

“People who communicate via selfie consider their frame, their background, their physical gesture,” he says while trying out a series of poses in front of a generic black-framed mirror. He cocks his head, switches the phone to his other hand, snaps a few. I join for one with my own phone, which I use to hide my face from the mirror. 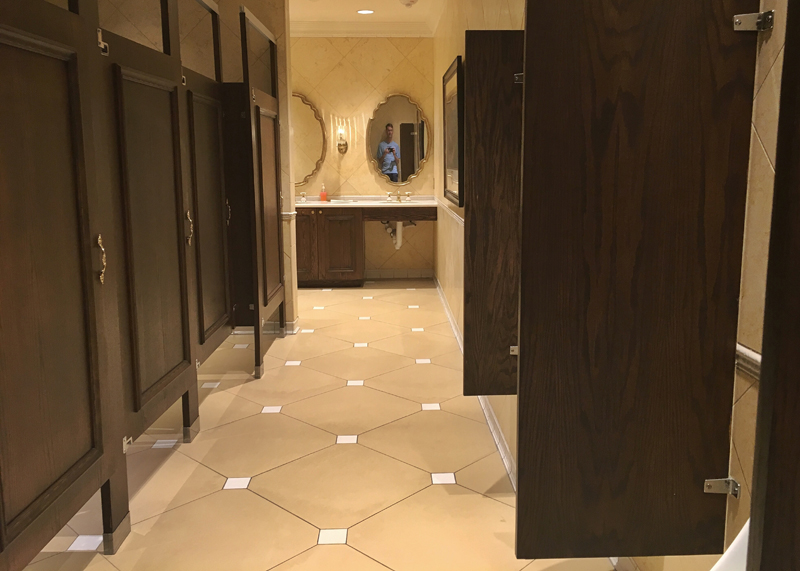 The selfie’s artistic forebear is the self-portrait, a dignified ancestor that grappled with difficult philosophical questions regarding human bodies and minds. The contemporary photographic self-portrait, from the medium’s disposability to the cute “ie” tacked onto the prefix to make it a stand-alone noun as well as a verb, doesn’t obviously make a similar exploration into identity. Yet selfies can engage the problems of who we are and how much agency each of us possesses, and they allow adolescents to make tentative steps toward the art world without drawing too much fire. As Hock puts it, “I don’t know if you can make those clear distinctions anymore, between selfie and self-portrait.”

After Thou Mayest and our stop at Grinders, we head to the fragrant Beco Flowers, off Southwest Boulevard, where Hock recently installed a solo show of his bathroom selfies — and, as part of the exhibition, built his own bathroom for viewers. (To take selfies in, not to commune with the plumbing.) But the show has come down, and the only bathroom for us to visit is a clean, properly usable space with facing mirrors. Hock makes a wardrobe change, choosing from among the shirts and ties arrayed on hangers in the backseat of his beige-gray Subaru. Varying his clothing is one way he achieves the illusion of time passing in his photos. I have not thought this far ahead and therefore remain in the outfit I’m already wearing.

The mirror above the sink rests in the kind of gold frame seemingly designed to reflect a perfectly coiffured beehive atop every human head. The wall-sized mirror opposite the sink is flecked with whatever material mirrors are flecked with to suggest a confectionery quality. Hock stands at the sink, and I stand at the decorated mirror. We hold up our phones and make eye contact through the screens, the mirrors and across the room. The result is the first selfie I have ever witnessed that might express more than just faces. The moment is surreal. 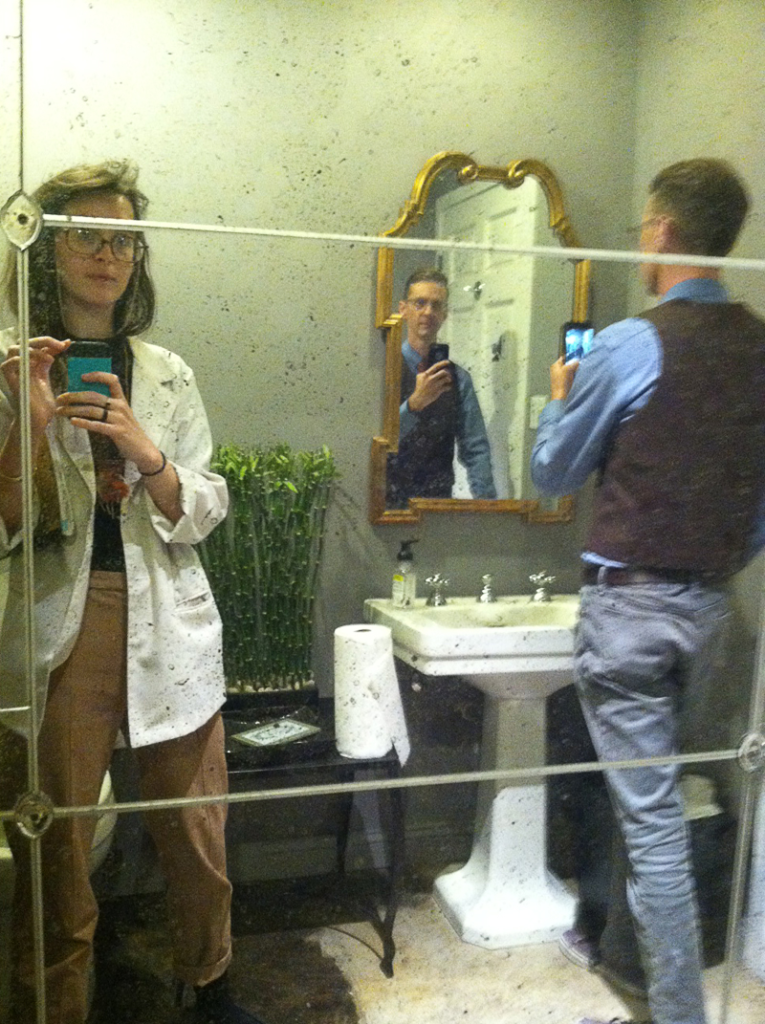 Critics of the selfie — and of the millennials believed to take them most — neglect to consider how portraiture has always been generous to its subjects. The invention of the front-facing camera did not revolutionize our ideas about who we are; it simply provided a tool that allows for deeper consideration of how we want to present ourselves to the world. Here is a new way to answer (and update) a basic question with a few simple environmental and gestural choices, and a far-reaching platform. Who am I? Who am I right now? No matter how curated or slapdash a face or body might appear on the internet, the image is intentional. The selfie makes few excuses or apologies for existing exactly as it does — a quality I will see emerge in Hock as we make our way to our fourth destination.

We leave the botanical calm of Beco for the stroboscopic frenzy of Up Down, next door. Hock and I show our IDs to the doorman and head straight for the bathroom. We line up at the sinks, in a space apart from the toilets, more comfortable in this genderless area but also more exposed in our harmless but fairly strange mission.

In the arcade noise of the bar, I discover something I’ve always kind of known: I care what people think of me. Hock, on the other hand, does his thing without much regard for what’s going on around him, including judgment. He makes his face, poses, lifts the camera and clicks away.

Nonchalance, something I find difficult to summon when there is zero risk of a camera recording me, is the hardest thing to affect when taking a selfie. Hock’s roster of poses has become second nature to him: the professorial Adjusting My Glasses, the assertive Foot on the Sink, the cheeky Both Hands on the Phone. I try to find a move of my own, but the self-consciousness I feel in the energetic bar rattles my hand and twists my face to yield a seriously unattractive selfie, wherein I am partly obscured by an ad for a popularly resurgent green soda. 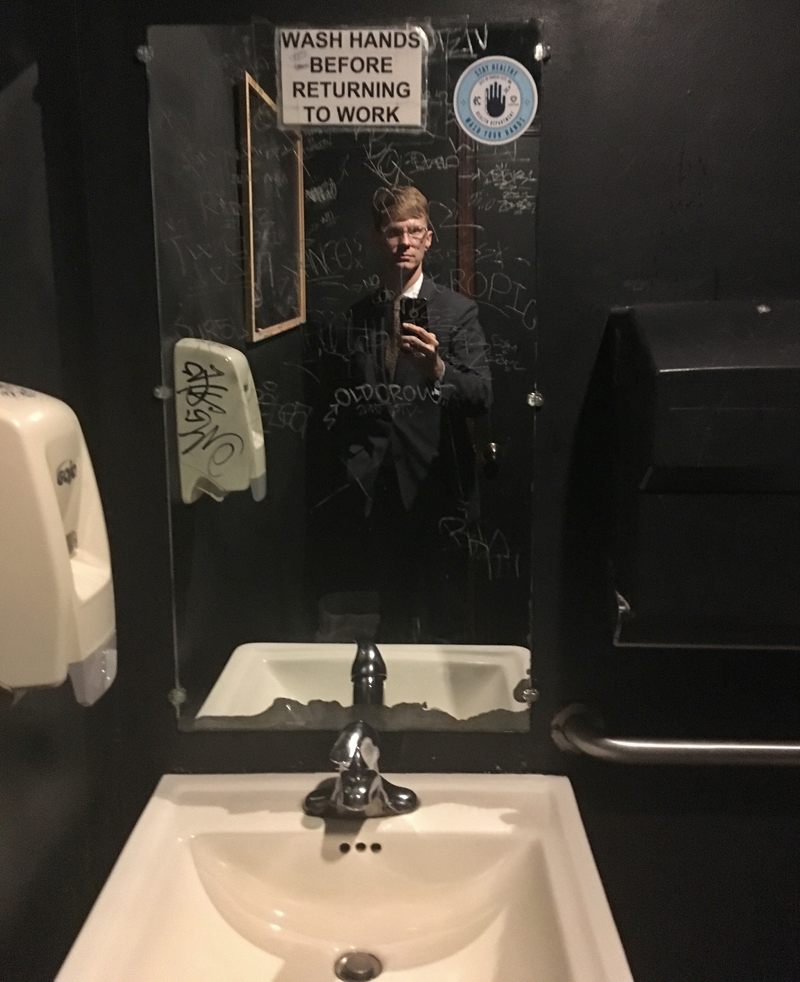 Bathrooms outside those under one’s own roof are historically complex places — universally necessary, supposedly safe, but divided by gender, long segregated and, now, sexually politicized. Making the bathroom the center for a body of artwork is both a radical tactic and a subdued one, and it’s this contradiction that Hock taps into when he shoots.

“Some people are saying bathrooms are unsafe, and it has everything to do with what people perceive as the other,” he says. “Social policing pushed me in a direction I was comfortable with, which indicates a huge level of privilege itself. Without critical thought, however, I could say, ‘Oh it’s just me and it’s natural.’ But it’s natural for another person to be the same way, except they are getting socially policed out of there while trying to re-exert agency over their identity. Even though your performance feels OK to you, it’s still a performance.” 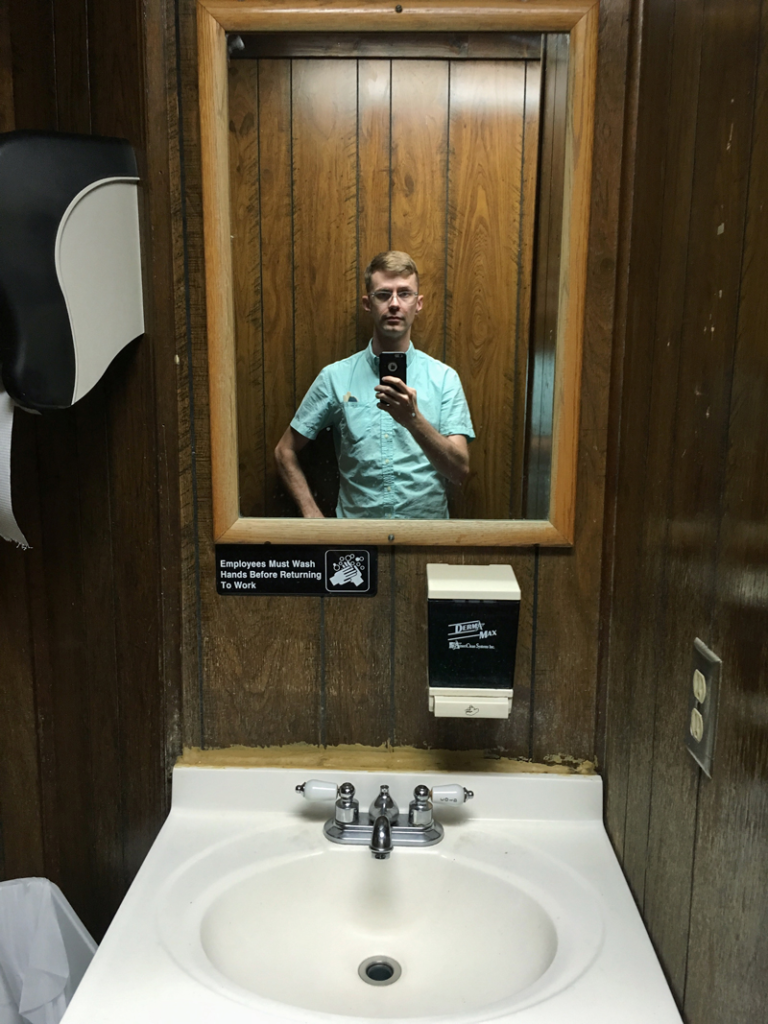 We’ve come to our last destination, and it isn’t a bathroom. Hock pulls the car over near 19th Street and Troost and pops the trunk. Hugged tight in the Subaru’s built-in netting are a cheap framed mirror and parts of a dismantled toilet. We heave the pieces to the alley behind Outpost Productions and set them down on the gravel. Hock assembles the toilet like he has done it a hundred times.

“For my show at Beco, I shot all my photos in natural light,” he says as he works. “But as long as certain elements are the same, people can be convinced into thinking you are actually in a bathroom.” A mirror to reflect the selfie, a toilet to prove the location — what more do you need?

We crouch down until my head is inches from a walnut-sized spider in the center of a web, just above a patch of grass where late-season crickets still chirp. Hock uses both hands to hold up the mirror, leaving the crucial part of the operation to me. I scoot into the reflection and aim my lens in a way that captures him, me and the incongruous bathroom fixture behind us. In a few shots, I have a bizarre but appropriate image, by which I’ll be able to remember this whole episode. My camera feed now includes an unusual number of images of myself, which I decide I can be comfortable with so long as nobody else sees lined up together in the grid. That doesn’t sound like the height of confidence, but for me it’s fairly radical.

I thank Hock, and then I end up back at Grinders. It’s Friday, and the crowd has swollen. I’m here to meet a friend, but first I go into the bathroom. I read the graffiti on the wall. I wash my hands. I fix my jacket, take out my phone, lean toward the mirror a little more than I am used to, and take a selfie.