Travis Kelce on his dogs, a new partnership, and the upcoming NFL season 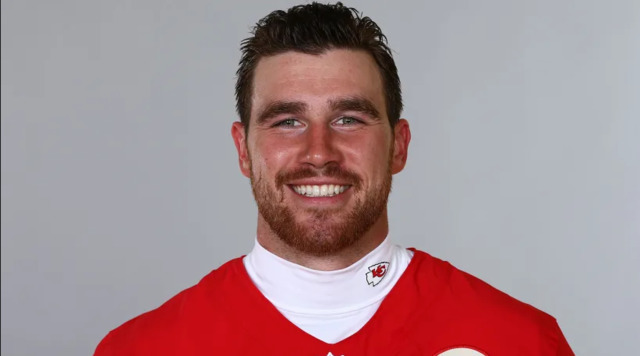 Kansas City Chiefs fans will have the opportunity to not only meet but dance it out with Travis Kelce and his furry companions, Chauncey and Rambo, this weekend at Bar K. The Chiefs tight end has a new partnership with Seresto, which makes a collar for dogs and cats that provides continuous flea and tick protection. This Saturday, Bar K is hosting the grand opening of its Seresto Stage from 10 a.m. – 10 p.m., and Kelce will be hosting a touchdown dance competition on the stage from 6 – 6:30 p.m.

The all-day grand opening will feature a number of events in addition to Kelce’s dance competition, including caricatures for pets, pet trivia, and live music. Proceeds will benefit the Rose Brooks Center — a Kansas City-based organization that provides shelter to women, children, and their pets in situations of domestic violence.

Attendees and their dogs will be able to take photos with Kelce and his two pups following the dance competition. Kelce spoke with The Pitch this week about his partnership with Seresto, his plans for Saturday, and his thoughts on the Chiefs’ upcoming season.

The Pitch: Tell me about this partnership with Seresto.

Travis Kelce: Seresto is this unbelievable company. They really understand the importance and joy that dogs bring to people. And, you know, I love my pups. I got a little, mini Goldendoodle named Rambo who’s not even a year old yet. Then I got two-year-old Chauncey, and he’s a Pomsky. I absolutely love these dogs. These dogs, they make the world go around during the season, during the offseason. Especially during this past offseason, kind of going through rehab and things like that and not being able to move from the couch. You know, they’ve made it a lot easier on me through the whole process. Seresto has come up with a dog collar that keeps fleas and ticks away from the pups. And with this, you only have to keep the collars on for eight months. And I really believe that Seresto brought this to life because of how much they know people love their dogs. They know how much people want to keep their dogs safe and away from these types of things. So it’s just a fun partnership, I’m excited about it. And this week in Kansas City at Bar K, one of the best-known dog parks in the city just north of downtown, I think it’s going to be an absolutely fun time, it’s going to be a blast. We’re gonna have some fun this Saturday.

What do you have planned for the event this Saturday?

So we got these fun activities. There’s going to be a Seresto stage, and then we’re going to have — they’re going to be going all day — when I get there, I’m going to do a touchdown dance celebration contest, which I think is going to be a big hit. Everyone’s going to enjoy that. I might bust out a few moves myself; I’m not sure. I’ve got a few tricks with Chauncey. Rambo’s still in the pub stage, hasn’t really figured it out yet, but it’s going to be a fun time. Just getting into the community and having fun with not only them but their loved, little furry animals as well.

So you’re going to have your dogs with you, then?

Oh yeah. I’m gonna bring both my dogs up there, and we’re going to have some fun. I’ve been meaning to get to Bar K for a while now, ever since I heard about it. This is the perfect opportunity not only for me to get up there, but to enjoy it with the rest of Kansas City.

You’ve mentioned how close you are with your dogs, and how they helped you get through rehab. Tell me more about life with Chauncey and Rambo when you’re not on out on the field.

I love to go to dog parks. You know, I’m usually the one to take them to a big, open field to play fetch with them. I got a lot of friends on the team that have dogs and obviously, we love to let the pups hang around each other. And then, for the most part, I travel with them. I take them everywhere we go. Last offseason I had Chauncey in the Hollywood hills running in the hills with me, feeling like the little coyote he is. I just love hanging out with them — playing games with them, trying to teach them tricks and little things on command. I don’t know, I’m just a typical dog owner I would say.

So they’ll be on the road with you again next season?

Oh yeah, for sure. And I wouldn’t say on the road in terms of during the season. Most of the time I’m on the road is in the offseason. During the season it’s just a quick flight to wherever we play and then we’re right back. So, I don’t have to miss them too much.

Speaking of next season, tell me a little bit about what it’s been like being on a team that many are picking to have a great chance of winning the Super Bowl this upcoming year?

I think that this might be the first time I’ve ever dealt with this, but it’s a fun atmosphere to be a part of. Everyone’s always kind of doubted us. I’m sure we have our doubts out there and all of that. The question that’s in the air is, Can Pat do it two years in a row? And I have full confidence that he’s gonna exceed what he did last year — just an unbelievable player. On top of that, you know, the defense has changed. We got a whole new side of the defense, both players and coaches. And I think that’s not only gonna, you know, what it’s done so far is broaden the energy to our practices and our intensity. But I think it’s going to give us a whole new opportunity, in terms of the games to succeed. And it’s gonna be fun.

Do you feel like the atmosphere on the team has changed since last year? With all the changes in the offseason and possibly more to come, does it feel like a different team?

Without a doubt, so far, without a doubt. Nothing against any of the coaches from last year or any of the players from last year. This team is just, there’s a lot more electricity in the air. There’s something about bringing something new in the building that excites a lot of people. I’m sure Kansas City’s just as excited as we are to put this thing on the field during the season and get the ball rolling.

What do you think of the Frank Clark trade?

What are your personal goals for this upcoming season?

I mean, just win the Super Bowl, be accountable in every aspect of the game that I can try to relate to or that the team asks me to do — whether it’s blocking, running with the ball, catching the ball. You never know. Just snapping the ball, throwing the ball, all of it, whatever the team asks me to do, I just want to be the most accountable football player that I can be. I kinda understood that you know, setting goals for yourself is fun, but in actuality and reality, there is only one thing that you should do on every single play, and that’s be accountable for the ones around you.

Outside of Arrowhead, what is your favorite stadium to play at?

That’s a good question. You know what, I love unique places. Early in my career I said places like Lambeau. Lambeau is very historic. When you pull up to the stadium you feel all the tradition in the stadium — how you walk in and kind of got that whole feeling to it, and it’s got this brand new skybox and the upper deck. It’s a pretty unique stadium. But as of recent I’ve realized that every time we play the Chargers in L.A., uh, Kansas City, the sea of red that shows up. And I’m not taking shots at anyone or anything like that. I just genuinely enjoy playing in Los Angeles against the Chargers because Kansas City travels so well that it makes it feel like it’s another home game for us.

Is there anything else you want to add about this weekend?

Just that everyone bring your pups and then let’s have a great time for a great reason — spreading awareness about Seresto and their new dog collar. I think it’s a great way to not only keep your pets safe and healthy but to go down to Bar K and have some fun while we do it.

The Seresto Stage Grand Opening will run from 10 a.m. to 10 p.m. at Bar K (501 Berkley Plaza) this Saturday, June 15.. Kelce’s dance competition will start on the stage at 6 p.m. and Kelce, Chauncey, and Rambo will stick around for photos afterward. Proceeds will benefit the Rose Brooks Center.