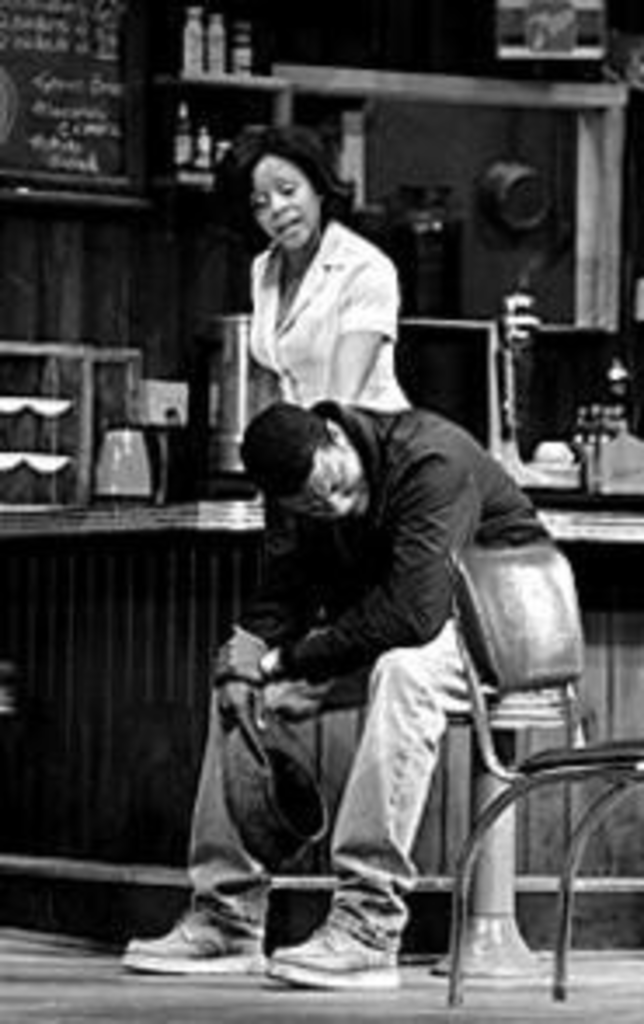 Since 1982’s Jitney, Wilson has been documenting the black experience in America by penning a play about each decade in the 20th century. He’s won plenty of awards along the way. I found his take on the 1920s, Ma Rainey’s Black Bottom, exciting, but I was largely unmoved by a production of Fences, set in the 1950s. His newest installment, Gem of the Ocean, set in the century’s first decade, never found a sufficient audience in New York and will end its Broadway run this week.

The Kansas City Repertory Theatre previously staged three plays in the series. The performances worked partly because Wilson didn’t insist that the story lines in the different installments lead logically into one another. He knows how to mix things up, and he clearly has a reputation that allows him to go where his plots want to take him.

But even August Wilson needs an editor.

Apparently, none was available when Wilson was crafting all of Two Trains Running‘s many side-plots and repetitive themes and utterances.

Ten minutes before the show starts, actors begin spilling onto the set, a modest if not downright ratty restaurant (well designed by Vicki M. Smith) called Memphis Lee’s. It sits in a largely black district of Pittsburgh called the Hill that, in 1969 when the play takes place, is targeted for demolition. It’s in the spirit of an urban-renewal project that, history tells us (as does the program), never succeeds; more than 40 years later, the land remains a parking lot.

Memphis (James A. Williams) loves his place but isn’t opposed to cashing in, as long as the city meets his price of $25,000. The other characters include his one employee and a handful of regulars. Risa (the magnetic Erika LaVonn) is his sole waitress and cook and the most interesting of the bunch. She lives her life on a clock of her own design, one tempered to accommodate her bored shuffle. (No one younger than 90 ever walks this slowly.) She’s also quite attractive, despite the grisly scars on her legs. She carves on herself as a sad attempt to keep men at bay.

Wolf (E. Milton Wheeler) roosts in a corner booth by the pay phone, from which he runs numbers for the neighborhood. A couple of his customers are also Memphis Lee’s: Holloway (Adolphus Ward), an old sage who comes in every morning for his coffee and paper; and West (David Emerson Toney), one of the neighborhood’s wealthiest members — and, not coincidentally, the owner of the funeral parlor down the street. Barking dogs offstage signal the imminent arrival of Hambone (James Craven), a disheveled and probably insane local who has one sentence in his vocabulary, which references a feud with someone about a missing ham.

The last man to enter the story is a force to be reckoned with. Sterling (Jay Jones) isn’t known to the group. He has been in the penitentiary, so his provenance is curious. To Wilson’s credit, Sterling is a fascinating conundrum: He wants a job, then he doesn’t; he’s friendly to Wolf, and then he isn’t. He’s full of shit but likable. Yet he shares with the other characters a colorful back story and palpable charisma.

Each actor here registers strongly; they’re compelling to watch if not always intoxicating to listen to. And director Lou Bellamy choreographs them with a skill that effortlessly mines both drama and comedy. The cornerstone of the plot, though, is the fate of the restaurant, which, as previously noted, takes a preposterous amount of time to unfold.

Wilson’s writing is elegant — often flawless, actually — but he takes too many detours. Several of the monologues could have been cut without harming the characters or the story. Hambone’s constant caterwauling, for instance, grows very thin and has little payoff. What is his purpose, really, except to communicate that Risa has a big heart and Memphis a short fuse? And some may find the frequent use of the word nigger off-putting, especially when it shows up in a punch line about guns. (It got a big laugh on opening night. )

Here’s the paradox: The integrity with which the show is acted and designed — including Smith’s set, Mathew J. LeFebvre’s perfect costumes and John Story’s complex sound design — is hard to reconcile with its tormenting length. I can’t help but think how terrific the evening would have been at a faster clip.